The man who didn't sleep 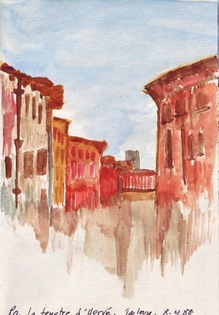 I met a man who didn't sleep. This was in the summer of 1988. I was in Toulouse, France, to visit a friend I'd made some years earlier in London, Dominique Hoff. Her sister, Marie-Christine, told me: "There is a man you must meet. He's the smartest man I know. He was my professor in dental school. He invents dental tools, and he can fix anything with his hands. He and his wife have converted a big old barn in the country into a home and workshop and a place for his collection." His collection? I said. The sisters laughed. "You'll see."

Paul Delprat and his wife Danielle Moog did indeed occupy a vast old barn somewhere in the countryside. They called it Cambolevet. They were a jolly middle-aged couple, waiting for us in the farmyard. A dog came to investigate. They exuded that sense of two people who know they belong together.

I was struck by her calm and Paul's restless energy, darting about to lead the way, opening doors, explaining the sights, agreeing with the slightest statement. Nodding. He was always nodding and smiling. Not as a nervous affectation. As a welling up of inner merriness. He had six words of English and my French was laughable, but the Hoff sisters served as translators.

The barn interior was a cavernous place with tall ceilings and spaces reaching out into the shadows. Near the entrance a stairway led to the living areas on the second floor, but we stopped for a look at the ground floor. This hadn't been rehabbed extensively, and some areas were essentially the same as Paul and Danielle must have found them. A lot of overhead lights had been installed. On every wall there were racks and shelves of tools and parts.A large part of this level was occupied by Paul's antique automobile collection. I saw at once that he was not an accumulator of pristine old cars. He was a rescuer. 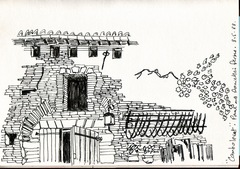 Most of his cars looked as if they might been found in neighboring barns, abandoned when their owners died and the heirs neglected them. I know little about French cars, but from my movie memories most of them were from around 1915 to the 1940s. The newest one looked to be an early Citroën CV2, circa 1950, the classic deux chevaux,that admirable working-class vehicle with the seats that could be removed for use with a picnic, the hinged windows, and the roll-back canvas top. A car I have always desired. It would solve all of our present automobile problems, including speeding.

It was explained that Paul repaired and rebuilt these cars by hand, and that they were almost all in running condition. I noticed overhead blocks and tackle, a grease pit dug into the floor, one of those trolleys you use to slide under a car."Will you sell these?" I asked through my translators. Non, non! He was nodding his head as if that meant "Yes! Yes!" He would keep them! Danielle, behind him, smiled and shrugged her shoulders, as if to say, C'est Paul pour vous .

We were moving on. Paul smiled and nodded and lifted a finger as if to promise greater miracles. We entered a part of the barn given over to countless mechanical music machines: Calliopes, robot orchestras, automated one-man bands, wind-up music boxes. One was the size of a New York bagel wagon and was open so you could see keyboards in action, drums and cymbals, wind instruments powered by a bellows below. Small figures, like those on a clock, would appear and strike chimes. Paul wound it up and it performed a march. 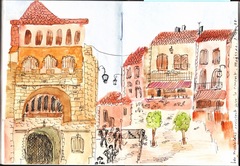 These, too, he rescued from abandonment in old barns, garages and storage rooms. Often he would exhibit one at a local fair. The children liked them. I could imagine that. There is no wonderment in a digital source of music. At least with a turntable you can understand what's happening.

But this! Here was a miraculous machine designed only to create delight. It didn't play music. It performed it.

Now it was time to mount the stairs into the living quarters. Paul and Danielle lived in comfort. You could sink into the chairs and sprawl on the sofas. Like all the best living spaces, their great room looked as if it had designed itself, or grown organically. I remember reading somewhere that in an English country house, nothing should look like it has been purchased in this generation. There were books everywhere. Danielle explained almost apologetically, Mais j'aime lire! Sparkling water and vin blanc appeared, and we walked out onto a large covered veranda that overlooked the late Toulouse afternoon.

Paul still practiced as a dental surgeon, I learned, to keep his hand in. More of his time was occupied by his position on the medical faculty. Marie-Christine said he was a famous teacher, and she was one of a legion of his students. It was clear she stood in good favor with the couple, so good that we visitors could drop into their lives and as twilight gathered be served a magnificent country meal prepared by Danielle. Mushroom soup, lamb stew, haricots verts. A tart with fresh cream for dessert. Little cups of strong coffee. We angled our chairs to regard the last of the sunset. 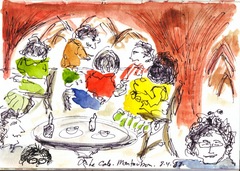 Vous avez encore rien vu! You've seen nothing yet! Paul sprang to his feet and beckoned for us to follow him. We ascended another flight of the circular staircase and found ourselves in one of the most extraordinary rooms I've ever seen, up there under the high eaves. This was a workshop for the hand-manufacture and repair of small mechanical devices. Here Paul worked on his dentistry inventions. He restored small toys -- mechanical banks, coin dispensers, Punch and Judy shows, music boxes. And above all, he repaired watches.

He pulled out the gooseneck lamp above his workspace and showed us the antique pocket watch he was working on, its occult secrets laid bare to the world for perhaps the first time in a century. He used tiny tools and a big magnifying glass that swiveled out over the watch. He carefully selected a tiny part and inserted it meticulously into its place. He stood and regarded it with pride, almost impatient to continue. He lifted a cautioning finger: Vous avez encore rien vu.

We moved into a space containing rows of wooden cabinets. He slid open a drawer. Inside, each in its small space, were dozens of watches. The next drawer held dozens more. I had the impression he had every watch he had ever repaired. He explained, "I remember every one." 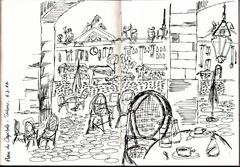 The sisters said it was late enough that we really should be getting back to town.

"I want to ask Paul where he finds the time to do all of this work," I said. This was translated. His eyes twinkled as if he had been awaiting such such a question. Dominique and Marie-Christine smiled because they already knew the answer.

I was having trouble comprehending this. "You mean you stay up all night?" I asked as if he didn't understand what he was saying.

Oui, he stayed up all night. And all day, too. 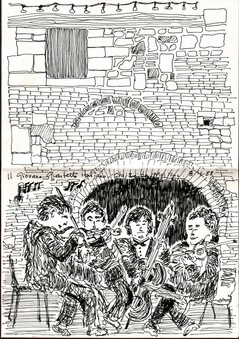 "And Madame?" I asked. The sisters were delighted now at my astonishment.

"But Paul, how do you stay up all night?"

We began to leave. Danielle said she would show us the way. "I'll just stay up here," Paul said, eyeing the unfinished pocket watch almost restlessly.

On the drive back into Toulouse, I told Dominique and Marie-Christine I had just spent an evening I would never forget.

"But do you believe he really doesn't sleep?"

"It seems impossible," Marie-Christine said. "But that's what he says. And Danielle agrees with him."

"All the same," I said, "Danielle sleeps. She's not up all night. Maybe he gets a nap when she's not watching."

"That's always possible. She says he always wakes her up with her morning coffee."

In January 2010, I received this letter from Danièle:

Since you came to my home in 1988, I have never forgotten you and thanks to Marie-Christine HOFF, I have from time to time heard of you, without your knowing it.

Can you imagine the impact your article on "THE MAN WHO NEVER SLEPT" has had on me ? What a beautiful title which would certainly have induced Paul to laugh!

This "flashback" has brought me twenty years in the past and the door of suffering I had so carefully closed has all of a sudden reopened.

Yes, Paul passed in early November 1999 and he sleeps at last.

Endeavouring to memorize the past to the best of my ability, I can sincerely tell you that Paul managed to sleep, but so little, so little while stopping and waking up for a quarter of an hour afterwards. I can't be affirmative for nights, but by daytime, he often happened to close his eyes after lunch during 10 to 15 minutes. Then the fine mechanism started anew, happy and communicative.

He did not want to sleep. He used to say that for him sleeping was a small death and thus he would be entitled to have two lives.

I spent many years with him without ever getting tired of his manifold passions which he forcibly induced me to share.

Like all artists, he had his periods. One passion expelled another one, but the mechanics has always been present and prevalent.

Then one day, he no longer wanted to envisage the creation of a small museum and gradually got rid of the objects which had a soul for him and to which he had given a second life. The only passion he kept until his untimely death consisted in repairing watches.

But during his last years, he at last came out of his haven of peace to go to the sunshine and indulge in a new passion he shared with a friend : fishing and basking in the sunshine. "Sun comes down with a burning glow, mingles my sweat with the earth below" (Harry Belafonte).

One sunny morning, we heard that he would not live until the year 2000.

The door of his suffering I had so carefully closed opened again, but the tears of my sufferings mingled with tears of joy for, in this earth, he still had someone who thought of him....

Now, I spend a lot of time in the Caribbean area where the starry nights seem to show me the way which one day will lead me to Paul.

For a certain time, I have been consorting with a man who has taught me that "in the darkest night a candle glows for everyone of us".

Therefore, I am walking along a new path with him. One should rather say that Paul and Danièle are getting along with Harry towards places under the burning glow of the sunshine. For God's sake, How Paul would have adored the Caribbean.

Very Sincerely Yours, and many thanks for paying this so beautiful homage to Paul.

The sun sets over the fields of Paul and Danielle, as seen from their veranda 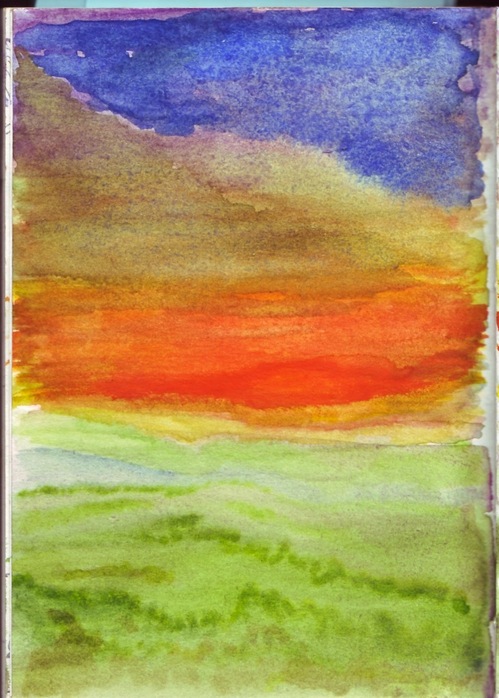 "To Sleep," a prayer by John Keats during insomnia

A automaton orchestra in Renoir's "Rules of the Game"

This will lull you to sleep

TV Commercial for the Citroën 2CV

How to change a watch battery

My question is, how did Paul get the music boxes into the barn?