The chimes at midnight

Unless we find an angel, our television program will go off the air at the end of its current season. There. I've said it. Usually in television, people use evasive language. Not me. We'll be gone. I want to be honest about why this is. We can't afford to finance it any longer.

Before I go into details, let me say that by any fair measure, "Ebert Presents At The Movies" has been a great success. The program has a coverage of more than 90% of the country, and all of the top 50 markets. Our ratings place us among the top shows on public television, and compare to the ratings of cable news. And we have loyal and vocal followers. Whenever our show is pre-empted for any reason we get immediate e-mails, calls and letters from viewers looking for it. We have also had cordial relations with the programmers and station managers across the country.

Chaz and I were just sitting here watching this week's episode, and when it was over she turned to me and said, "It's a damned good program." I agree. In Christy Lemire and Ignatiy Vishnevetsky, we have ideal co-hosts. It took them a few weeks to settle in and get used to working together, but right now I think they're doing it as well as it can be done. They know their movies, they come from different viewpoints, they listen, they respond, they are clear and forceful. We are also proud of our our contributing critics, director, staff and crew, and the educational programs we have established for our interns.

I believe a program like this is needed on television. On "Ebert Presents," a new Johnny Depp movie can get two thumbs down (or up, or a split decision) from two intelligent people who will tell you why they voted that way, and challenge one another. Movie coverage on TV is otherwise so intensely driven by marketing that some programs actually cover the marketing itself. 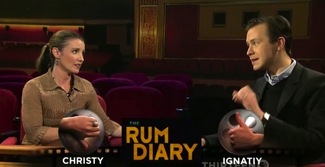 In trying to get the show back on TV, we approached WTTW, the Chicago public station where Gene and I began on "Sneak Previews" in 1976. In the dusty corner, they still had the balcony chairs we used. We went in for meetings. WTTW said it would love to have the show back again, and spoke of ideal time slots. They couldn't have been friendlier.

There was a problem, which I didn't catch on to right away. They were not going to finance the show. I was living in dreamland. We were expected to finance the show ourselves. We would give the show free to those public stations that wanted it, using something called American Public Television to distribute it. APT is a different entity than PBS, but we would receive no funding from either one. As producers of our show, we were expected to find foundations or other sources that would underwrite it. We believed so firmly in the show that Chaz and I agreed to back it personally while we started looking around. We have been talking to corporations, private foundations, and public charitable organizations, the sorts of places you might think of. 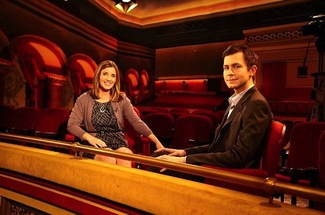 We could offer the underwriters something more than a feeling of benevolence. At the beginning and end of each program, they could have a 15 or 30-second spot. They'd be getting two spots on a national program. Our demographics include the most educated viewers in the "right" age groups and geographic areas.

Since we went on the air in January 2011, "Ebert Presents" has been almost entirely funded by Chaz and me, plus $25,000 in generous backing from the Kanbar Charitable Trust. We paid for the screen tests. We paid for the pilot. We paid for the titles. We paid for the set, the lighting, and all of the salaries (Chaz and I do not draw one). We have offices at WTTW, for which, of course, we pay rent. We pay for the director, the camera operators, the assistant producers, the interns, the editors and editing suites, the transmission of the show to American Public Television, lunch on taping days, everything. We also paid for the design and maintenance of the web site, www.ebertpresents.com.

We can't afford to support the show any longer. That's what it comes down to. Chaz has been the heroine here. As executive producer, she did all the heavy lifting. When the first package of shows played, she told me we should stay on the air from autumn through December. "It's a beautiful show," she told me. "Christy and Ignatiy have found their groove. We've paid for the backdrops and sets. It's the show we dreamed of. Let's give it one more chance."

We did. But now American Public Television wants to know if they can tell their member stations we'll be back in 2012. We have to give them our answer this month. Unless we find underwriting, I'm afraid our answer will have to be "no." Chaz says she still has a few more days to keep making calls.    A postscript at 5 p.m. 11/7:

I should make clear that I'm not blaming public television for this kettle of fish. They've been honest and forthright in all of their dealings with us, and provided the show with a good home. I just wanted to lay out some facts about the public television business model, because many people thought we are being funded by them. Your donations to public television are put to good use. Without that support for their operations, the public television stations couldn't maintain their facilities from which to broadcast shows like ours, nor produce local productions. Your donations to public television stations are an essential part of the system. American Public Television is at its annual meeting in Memphis this week, and at last year's APT meeting in Palm Springs they were the friendliest people in the world to the show and me personally. We'd love to keep working with them.

We appreciate your suggestions, as in the comments below. We are huddled at our offices to consider the comments we have received with interesting offers, and also to investigate alternate methods of fundraising such as Kickstarter, Indiegogo and others. Also, some of you had ideas for corporate sponsors that we want to follow up on. Stay tuned! And thank you for your support. You are very encouraging.

A split decision on Johnny Depp:  A spirited exchange on Godard:  An index of every film reviewed this season.