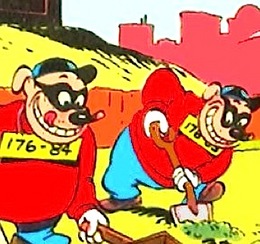 The Tea Party and the Wall Street demonstrators share the same conviction: They are the victims of theft by powerful institutions. The Tea Party blames government taxation. The demonstrators blame corruption in the financial industry.

The concern about taxation is perplexing, since U.S. tax rates are at a historic low. Indeed, there seems little chance that we can ever begin to pay off the American deficit without raising taxes. Many millionaires, led by Warren Buffet, have volunteered to pay higher taxes. A belief persists, however, that the middle class bears an unfair tax burden. In repeating this charge the other day, Mitt Romney included himself in the middle class.

Financial corruption is widely manifest. It was greed on Wall Street that apparently led to the current economic downturn. A bailout of failed institutions led to them repeating some of the same greedy practices. Some financial executives have been sentenced to prison for their roles in the manipulation of the mortgage markets.

A grotesque imbalance continues. Corporate executives draw multi-million-dollar bonuses even while driving their companies into the ground. Executive income is no longer driven by success but helps contribute to failure. Their bonuses are the aspect of their corporations that many executives focus on most keenly. Some Wall Street firms have been shown to deliberately create financial instruments intended to fail, and then selling them to clients.

In the face of such practices, which take money from the pockets of most American, the Tea Party calls for corporate tax rates to be slashed. There is a belief that the richer the rich are, the richer we will all be. One source of financial backing for the Tea Party and its candidates for public office are the billionaire Koch Brothers, who were recently charged with malfeasance, fraud, and illegal sales to Iran.

The Wall Street demonstrators seem to have no particular source of financial support; at this point early in its development it is a genuine grass roots movement that seems to be spreading spontaneously. It's evident that both Tea Party members and Wall Street Occupiers are driven by outrage against a system they see aligned against them. The difference is that the Party's energy, ironically, is aligned against the best interests of its members. This is yet another example of how the right and its Fox News spokesmen create a mythical reality serving the interests of its political allies.

I would like to say the Obama administration offers a clear alternative, but it does not. Obama has made perfunctory moves in the direction of financial reform, and his justice department has filed a few cases, but I sense a lack of zeal. The fact is that both big parties seem largely in the pockets of big money. A few lawmakers, like Dick Durbin and Al Franken, are alone in their clear visions.

The two party system is broken, Ralph Nader has been telling us for years. Yet his disastrous attempts at forming third parties have resulted mostly in damage to his own cause. Now what we are seeing, I believe, is the formation of two New Parties within the shells of the Old.

The Tea Party has for all intents and purposes taken over the Republicans. GOP candidates genuflect in its direction and line up to address its conventions. The term "moderate Republican" has become an oxymoron. Although Romney, by far the most moderate of likely GOP candidates, now seems likely to win his party's nomination, he has moved sharply right to do so. And even then, the GOP campaign finds itself distracted by such obsessions of the "base" as the teaching of Creationism and the questions of whether Mormons are Christians. If church is separate from state, why is a candidate's religion a question? Ah, but many rightists don't believe church should be separate from state--not as long as it's their religion that is involved in a merger.

The Occupy Wall Street movement is spreading quickly to many cities and states, and could possibly become a nascent third party within the Democrats. Predictably, it is being attacked from the right as "socialist." Actually, it is capitalist, but believes in the regulation of capitalist institutions. What we live under now is a system of Corporate Socialism, a welfare state for the rich.

It seems to me that your politics can be defined by whose side you are on. Tea Party members are mostly on their own side. They believe they should pay lower taxes, or none. If we can't pay for health care, tough luck. The Occupation forces, who seem more affluent and might benefit more from lower taxes, are on the side of those being exploited by an unregulated Wall Street.