The following photo essay was originally posted Wednesday, November 12th, on the official Dogwoof website. It recounts Londoners' experience retracing Roger Ebert's footsteps as logged in his book, "The Perfect London Walk," and led by Dogwoof and Cinema Nation on Sunday, November 9th. In attendance was Steve James, director of the acclaimed documentary about Ebert's life and legacy, "Life Itself."

Roger Ebert was famous for writing about films. One of his lesser-known publications was a small book called "The Perfect London Walk" (1986) – an annotated tour guide around Hampstead Heath and the surrounding neighborhoods. 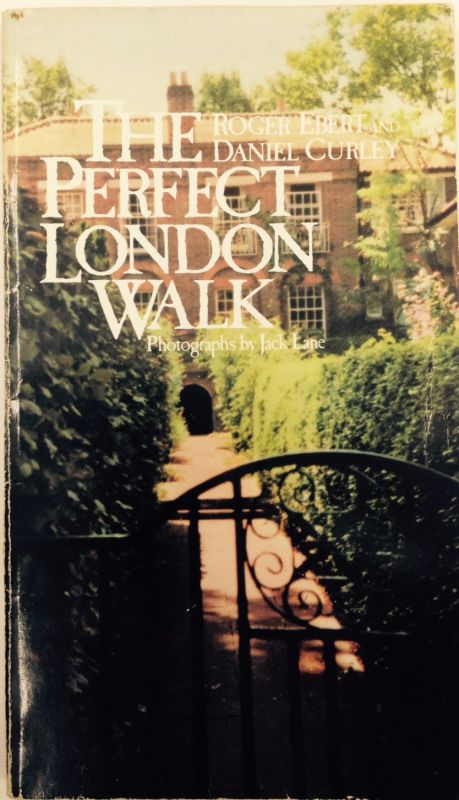 “For twenty years, my favorite pastime has been to walk around London. However, there is one walk that is more than just familiar. It is a ritual. It is one I have taken every time I have visited London. I have walked it in snow and sleet, in rain and cold, in burning hot drought, and, most often, on perfect spring or autumn days. I have walked it fifty times with a hundred friends, and I am not half through with it yet.” - Roger Ebert

With the imminent release of Life Itself and on the occasion of director Steve James’ visit to London, what better occasion (and tribute to Roger!) than to get out the gumboots and tramp around the heath, following in Roger’s often-trodden footsteps. 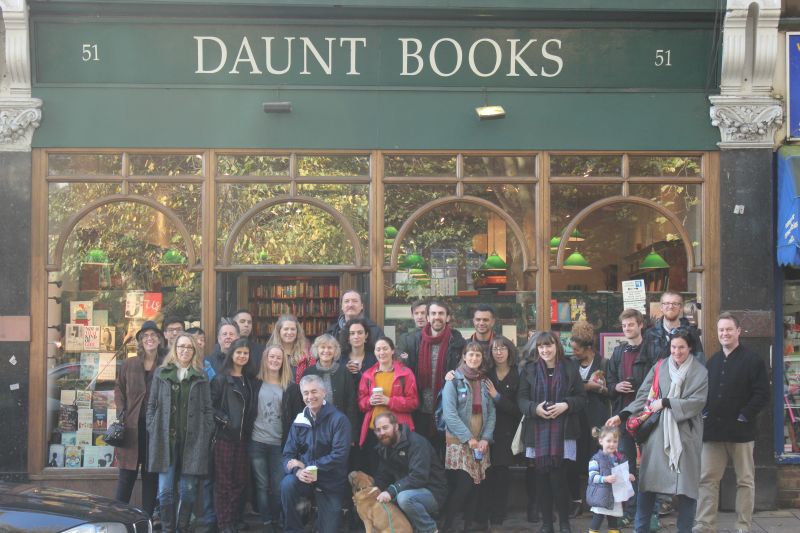 First stop was the house of British poet John Keats. As the sun shined gloriously, defying the usual November London weather, the group stopped read a few stanzas from Keats’ ‘Ode to a Nightingale’ – the first of many poems to be shared along the way. 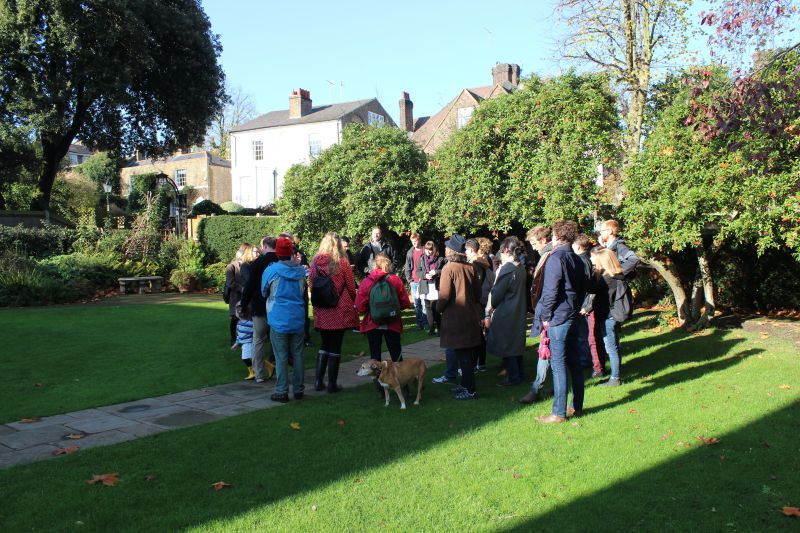 The swans were there to welcome us as we began our walk on the Heath. 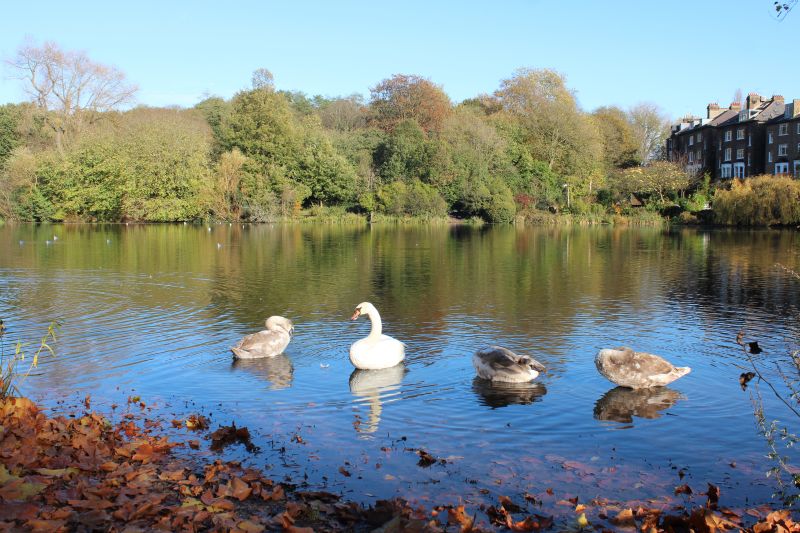 It was blue skies and flying kites as we arrived at the summit of Parliament Hill (the highest place in London, as Roger's book informs us) with a clear view of the city. 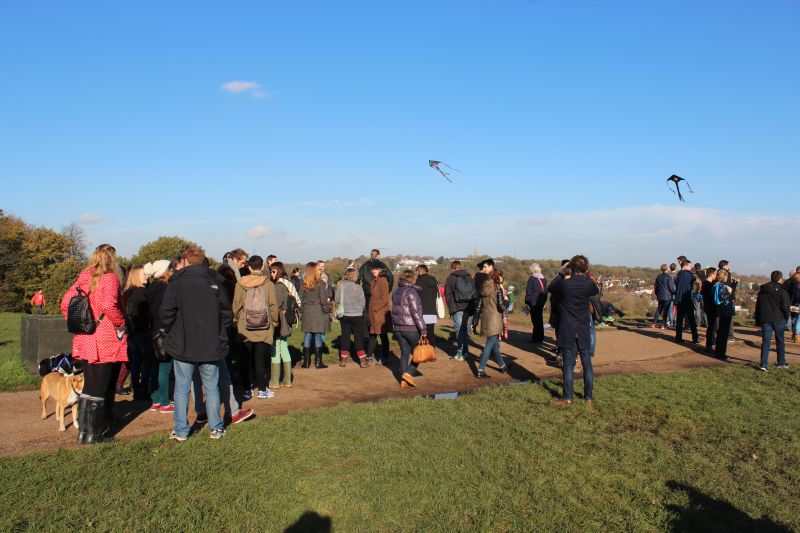 As per Roger's instructions, we left Parliament Hill, we walked "downhill toward a grove of oaks that is about eleven o'clock if you have your back squarely turned against London and the Post Office Tower. In a generally northewest direction lies your luncheon destination, the Spaniards Inn." 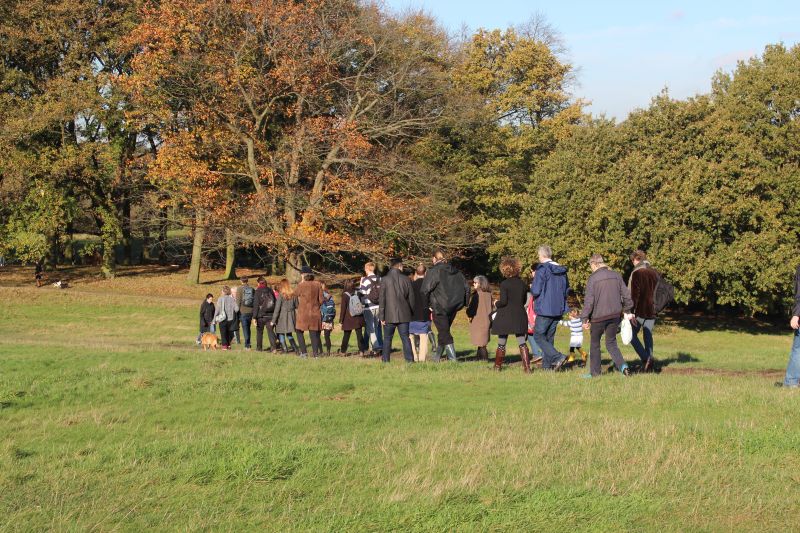 Gumboots (aka Wellingtons) were an excellent choice. 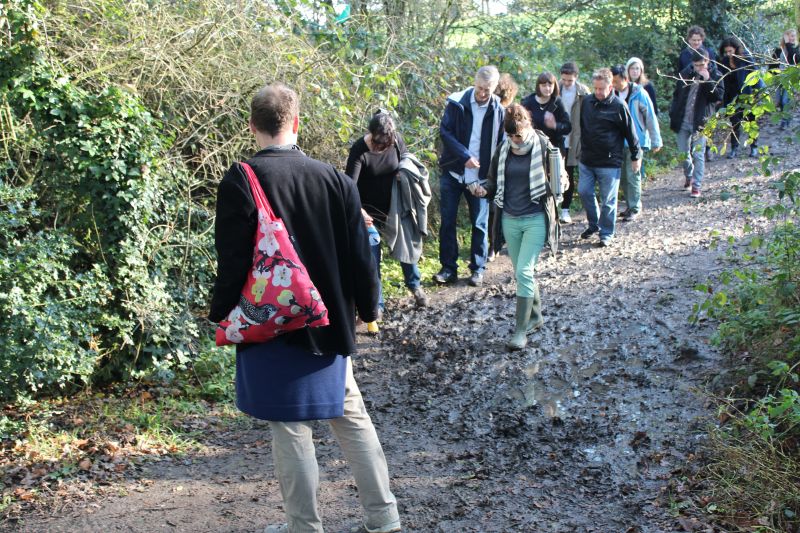 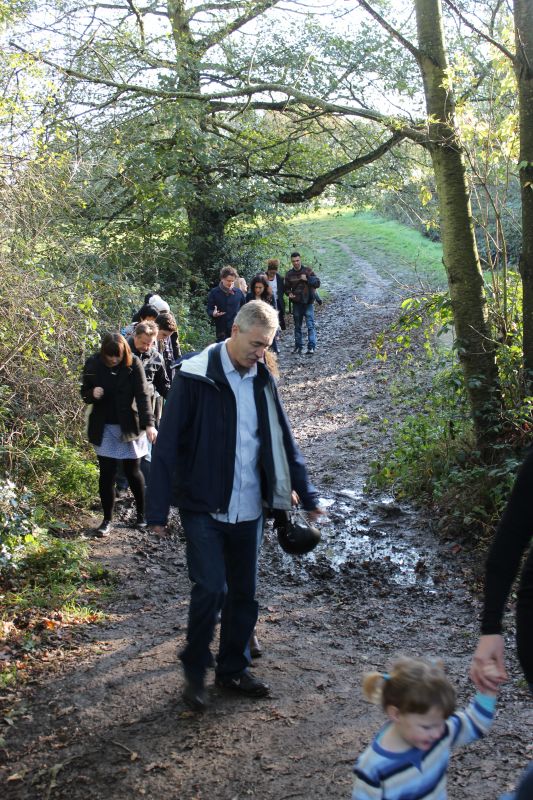 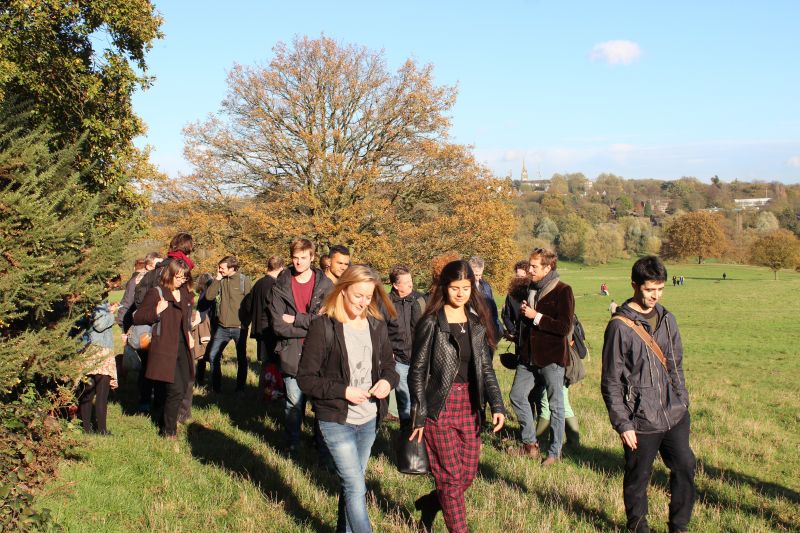 Here's the posse passing, as Roger writes, "a tumulus, or prehistoric gravesite. Legend calls it the burial place of Queen Boadicea of the Iceni, a tribe well know to crossword puzzle fans. After the death of her husband, who tried to protect her by willing much of his wealth to the Emperor Nero, she was deposted and humiliated. But she bided her time, and raised a rebellion, leading her people from the east in a war that wiped out the Roman Nith Legion, seventy thousand Romans, the cities of Colchester and Veralum, and parts of London. When the Romans finally defeated her in A.D. 61, she either killed herself with poison or died of rage (the stories vary). The mound is regularly violated or honoured by visits of Druid worshipers and black magicians, who offer sacrifices to the spirit of the dead queen, and leave behind the blood and bones of chickens." 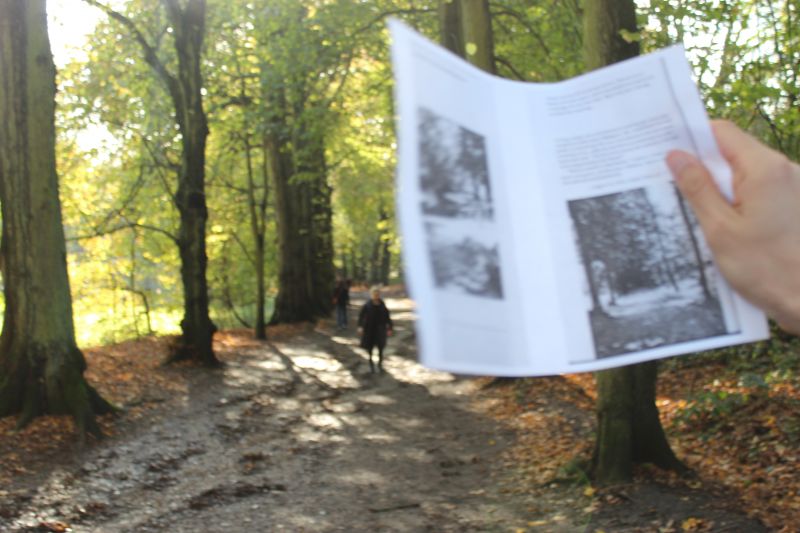 "Press forward into a grove of trees." 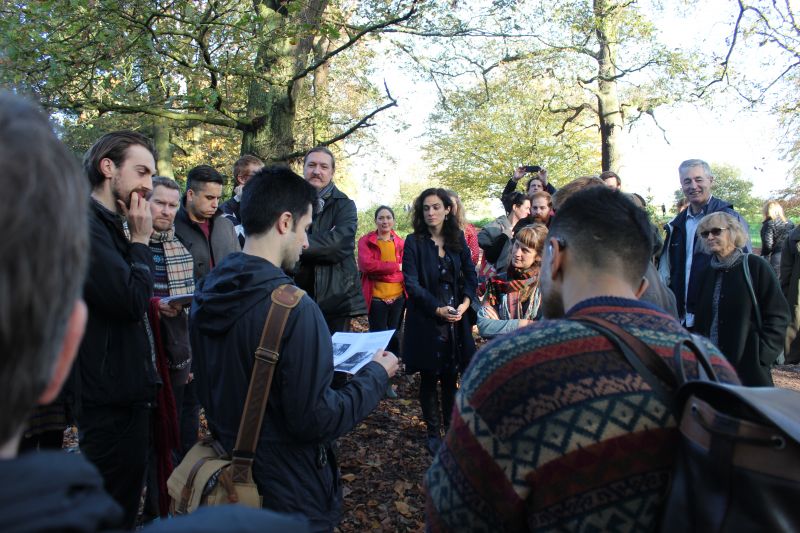 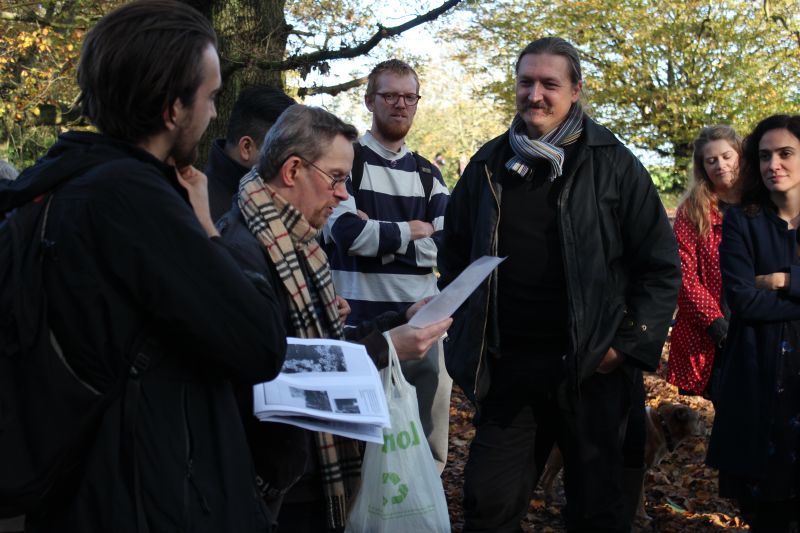 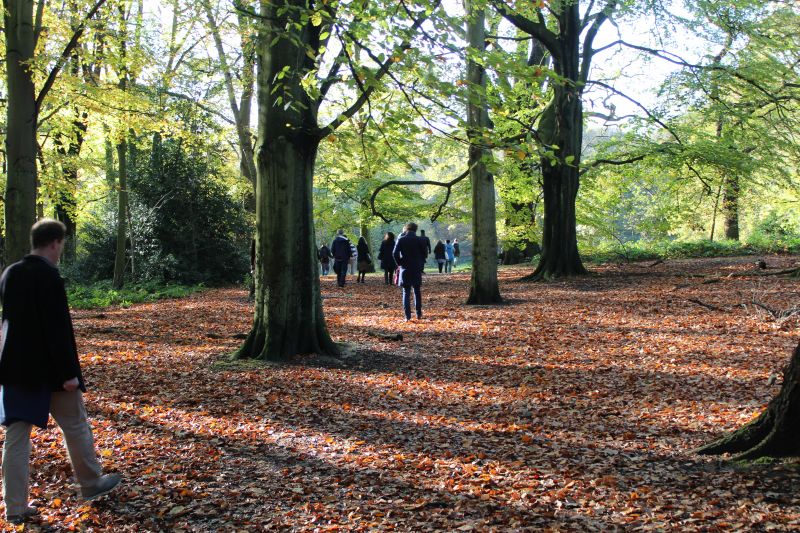 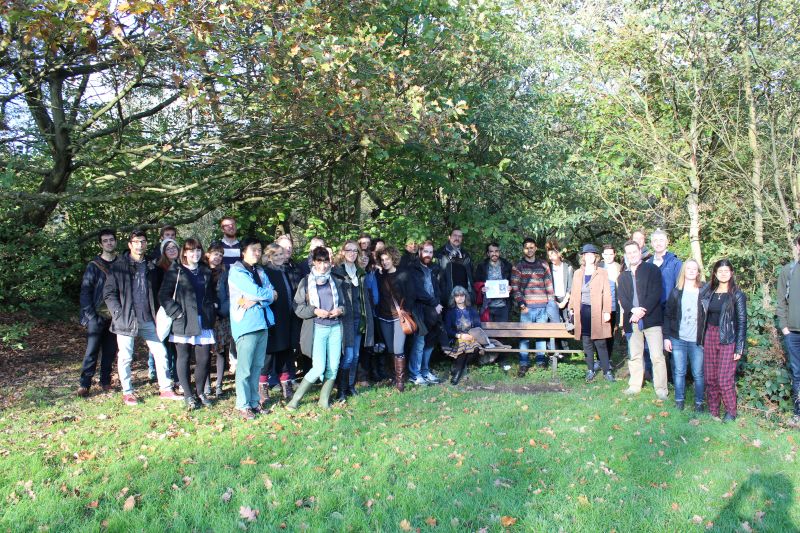 Group photo by Daniel Curley's bench. Curley was Roger's friend and mentor and is co-author of the "Perfect London Walk." 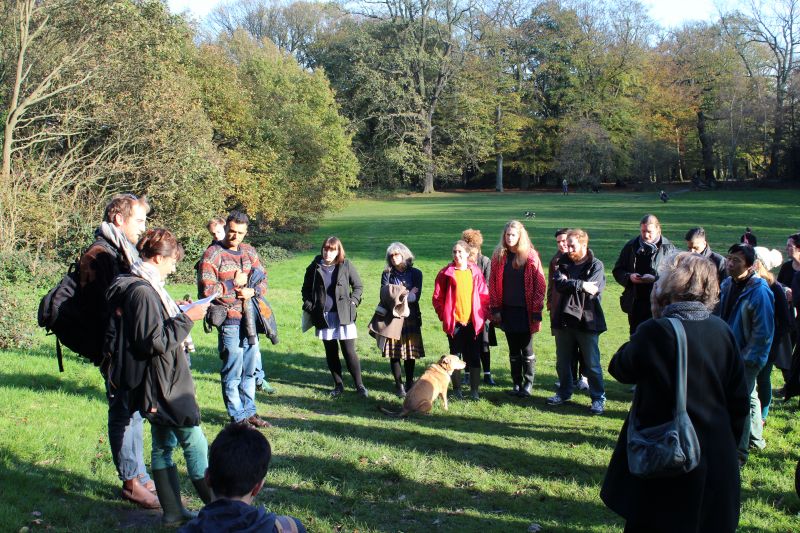 One more poem, this time Chaucer! 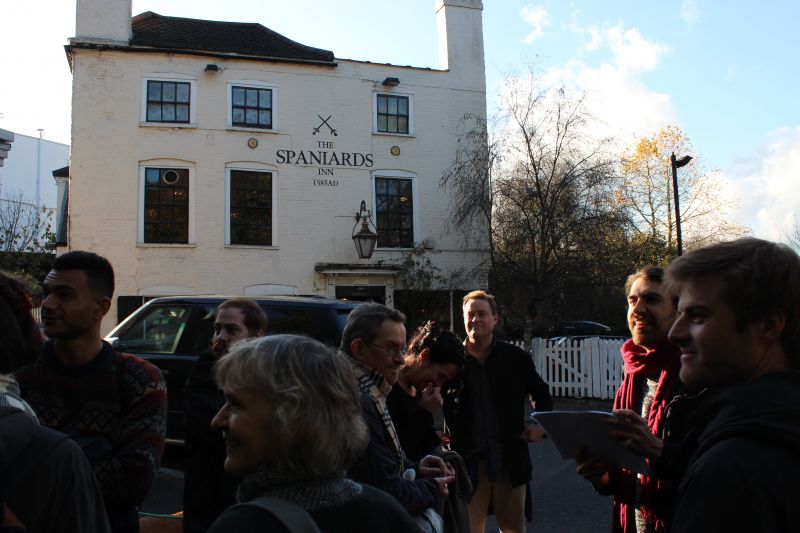 Our last stop on this abbriged version of the walk was the Spaniard's Inn.

Huge thanks to Michael Pierce for being such an excellent walk leader, and to everybody who joined us, especially Steve!

"Life Itself" opens in UK theaters today, Friday, November 14th! Visit the Dogwoof website to view a complete list of the dates, venues and showtimes for screenings of the film.