No favorable review I've ever written has inspired more disbelief than my three stars for "Speed 2." Even its star, Sandra Bullock, started mentioning in interviews her disgust with herself for agreeing to star in it. It's frequently cited as an example of what a lousy critic I am. (Note well: Siskel also gave it thumbs up.) All the same, I'm grateful to movies that show me what I haven't seen before, and "Speed 2" had a cruise ship plowing right up the main street of a Caribbean village.

In the spring of 1999, at the University of Colorado's Conference on World Affairs, I argued that movies like this weren't as easy to make as it might appear. In a moment of madness I announced in self defense a contest for a new "Speed 3." The rules were: It should be on VHS, no longer than five minutes long, and must involve something that cannot stop moving. Finalists were to be shown at Ebertfest. I can't remember if they were.

Fast forward to this year, when Mary Susan Britt at Ebertfest received a message from Kerry White, who wrote:

"In the spring of 1999, Roger Ebert held a contest at the University of Colorado at Boulder for students to make a "Speed 3" short. I am not able to find an archive of Ebertfest's previously screened films and videos, especially from 2000.

"Would you be able to help me? I am trying to locate the winning finalist. It was a riot to watch and I've looked online--hoping the videomaker put it up on youtube or similar--but to no avail. Either a title, or the videomaker's name (he was an engineering student), or both would be very helpful in my search."

I tweeted asking for info about the winning film, which I confess has completely escaped my memory. Mary Susan received his message from David Tish:

"Per Roger Ebert's twitter feed I wanted to e-mail you as I was a participant in the "Speed 3" contest that took place at CU Boulder. My film along with one other participant tied for the top score. Mine was called "Speed 3: Motion Sickness," and set on a roller coaster. Please feel free to contact me with any further questions."

The power of Twitter. David Tish posted his film on Vimeo, and I embed it below in all its glory. It's certainly high-energy, and I have to applaud it for never stopping moving. I haven't heard from anyone claiming to have tied for first place, but perhaps I will.

For that matter, what's happened to David Tish? I asked him to send a brief bio of himself, and a photo. He said he would. He never did. Maybe he simply couldn't stop moving long enough.

Here, for those very interested in this minute subject, is my 1997 review of "Speed 2." In all modesty I believe I make a damned good case.

• An explosive device with a red digital read-out that nobody will ever be able to see (this one is concealed inside a fake golf club).

• A villain who travels with jars of leeches, to suck the copper poisoning from his blood.

• A sweet girl and her lover on a Caribbean cruise. He just happens to be a member of an LAPD SWAT team.

• The other passengers on the cruise, who just happen to include members of a diamond dealers' association, who have filled the ship's vault with treasure.

•The villain's plot to hijack and destroy the ship, steal the diamonds, and get revenge on the computer company whose "electromagnetic fields gave me copper poisoning,'' after which he was fired and cast aside.

All of these pleasures, and more, are in "Speed 2: Cruise Control," which is a sequel to "Speed'' in name only--since even the basic premise is different.

The movie stars Sandra Bullock, from "Speed," and Jason Patric as her boyfriend. (The dialogue explains that she split up with the Keanu Reeves character from the earlier film for a lot of reasons, one of them possibly being that he did not want to appear in the sequel.) They go on a cruise, and are unlucky enough to pick the boat targeted for revenge by a villain named Geiger (Willem Dafoe), whose laptop computers can take over the ship's own systems and control them.

Bullock plays the same fetching character she played the first time: warm, likable, stuttering a little, calm under pressure. Unfortunately, considering that she was crucial to the success of "Speed," the screenplay gives her a secondary role and hands most of the best scenes to Patric, who handles them like a traditional action hero. At one point he puts on scuba gear and dangles inches from the giant spinning props of the ocean liner, and at another point he shoots a seaplane with a spear-gun and reels himself in. These stunts make the original "Speed" look plausible.

I chortled a few times. The first was at the digital read-out. Why do mad bombers always go to the trouble of supplying them? There's not much room inside the head of a golf club (even a wood), so why waste space on a digital read-out? I also chortled a few moments later, when the villain pulled out a piece of equipment labeled FIBER OPTIC CONVERTER in letters so large they could be read across the room.

Doesn't mean much, but it sure looks good. And I will long treasure a moment when a computer asks Geiger, "Time to initiate?" and he types in, "Now." Is the movie fun? Yes. Especially when the desperate Bullock breaks into a ship's supply cabinet and finds a chainsaw, which I imagine all ships carry. And when pleasure boaters somehow fail to see a full-size runaway ocean liner until it is three feet from them. Movies like this embrace goofiness with an almost sensual pleasure. And so, on a warm summer evening, do I.

The actual 1997 episode of "Siskel & Ebert" on which Gene agreed with me about the film. 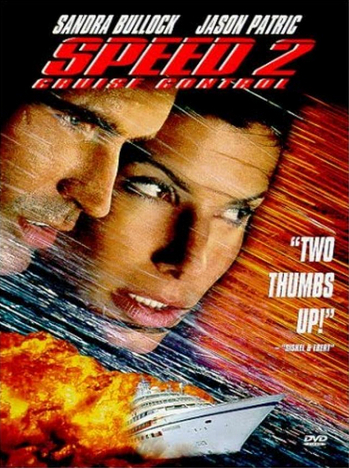