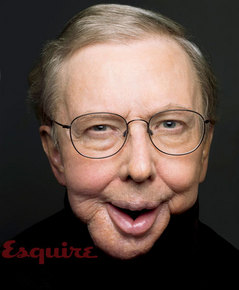 Christy Lemire wrote me: "So, everyone seems pretty moved by the Esquire piece on you, but I'm wondering what you thought about it. It's so intimate, personal."

Yeah, it was, wasn't it? It was also well written, I thought. When I turned to it in the magazine, I got a jolt from the full-page photograph of my jaw drooping. Not a lovely sight. But then I am not a lovely sight, and in a moment I thought, well, what the hell. It's just as well it's out there. That's how I look, after all.

It was an inexplicable instinct that led me to agree when Chris Jones contacted me requesting an interview. The idea of Esquire appealed to me. I did a bunch of interviews for them in the 1970s, when it was the crucible of the New Journalism.

What goes around, comes around. I'd read some of Chris's stuff. He's good. You sense the person there. He's not holding his subjects at arm's length. I knew I'd have to play fair. I've done interviews for years. This was no time to get sensitive and ask for photo approval, or an advance look at the piece. I'd been the goose, and now it was my turn to be the gander. I've never known what that means, geese-wise.

Chaz is always my protector. She had her doubts. She worries that I'm too impulsive and trusting. She is correct. Left entirely to my own devices, god knows what I might be capable of. She would follow me into the mouth of a cannon, but first she'd say, "Do you really think it's a good idea to crawl into that cannon?" Then I would explain that it was my duty as a journalist, a film critic, a liberal, or a human being, etc., to crawl into the cannon. And she'd suggest I sleep on it and crawl into the cannon fresh and early in the morning. 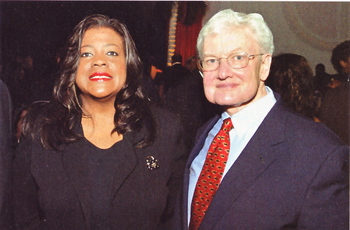 "Did you really have to write all those Tweets about Rush Limbaugh?" she asked me one day. "He's a sick man. What if people had written about you that way when you were in the hospital?"

"That would be their right," I said heroically. "Besides, he said he was fine."

"And you wouldn't care what they said about you?"

"Resentment is allowing someone to live rent-free in a room in your head," I intoned. That line isn't original with me. It may have originated with her.

The next morning I woke up bright and early and tweeted an apology to Rush Limbaugh. Anyway, Chaz wondered if I really thought it was a good idea to invite Chris Jones or anyone else do to an interview that would involve being followed around and observed informally. I said I sensed he wasn't looking for a kill but just wanted to write a good article. He was a real writer. We talked about it. I knew he was coming when Chaz started in with the house cleaning. 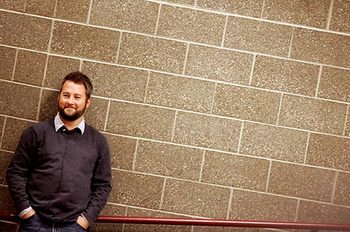 Chris Jones was an awfully nice man. He told us he lives in Ottawa, was teaching journalism at the University of Montana, and is married with two kids. So that tells you something. Well, it tells me something. I can't put it into words, but if the same man is also a senior writer for Esquire, he's my man. He arrived at the appointed hour, and he did an excellent job of describing everything that happened subsequently.

Actually, he left some things out. As our library was being cleaned, I noticed for the first time in some years the bound albums of our wedding photos sitting out. That lodged in my mind. When Chris was about to arrive and I was a little nervous, I told Chaz, "for God's sake, don't start showing him our wedding photos! That will make us look bourgeois." She looked at me in disbelief. "What makes you think I would ever show him our wedding photos?" I explained that because I had seen the albums sitting out, et cetera...I assumed, et cetera...and then he arrived. 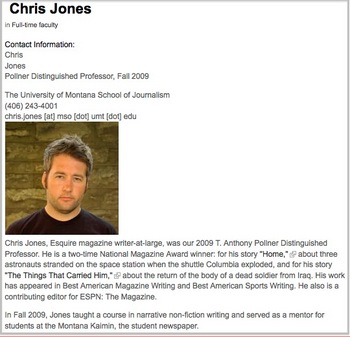 He hadn't been in the house half an hour before the conversation turned to Gene Siskel. I said what a close friend he had been, apart from our fights and feuds and the rest of it, which were real, but didn't dislodge our friendship. "His daughters were even the flower girls at our wedding," I said. "Chaz, show Chris our wedding photos." She looked at me like the eighth wonder of the world.

A little later I was telling Chris that Siskel was secretive and I was the opposite, always blurting out what I should shut up about. "He said my middle names should be Full Disclosure." This started Chaz to laughing and in the spirit of Full Disclosure she blurted out my dire warning to her about the wedding photos.

Well, that was okay with me, actually. My theory was that if Chris had an article to write it was not my place to write it for him as a favorable press release about myself. Let him write what he observed. Oliver Cromwell is said to have commissioned an official painting of himself, "warts and all." He apparently never said any such thing, was misquoted a century after his death, and his official portrait showed no warts, but never mind: He should have said it. 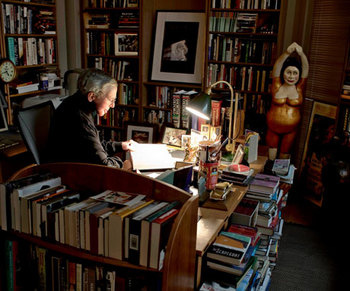 The best interview I ever wrote was for Esquire. It was told almost entirely in dialog, and involved an afternoon I spent with Lee Marvin at his beach house in Malibu. He spent much effort ordering in fresh supplies of Heineken's. I took faithful notes, sent the piece in, and waited for the shit to hit the fan. Esquire ran it with a headline something like, An afternoon with Lee F---ing Marvin. They used dashes in those days. I never heard a word from Marvin.

A few years later, I interviewed Marvin in his house outside Tucson. I observed he was not drinking. "I'm alive, aren't I? "He said. I said I didn't know if he would want to talk with me after the Esquire piece. He had married again a few years earlier, a girl he'd been in love with before he went off to the Marines. She started laughing. "That was Lee," she said. Marvin lit a cigarette. 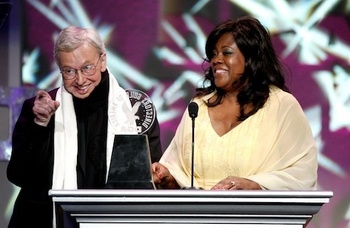 That's all you can really ask: For Chaz to be able to read the article and say it was about me. It was. By and large, it was a faithful account of what happened over the course of two days and evenings. The errors were few, small and understandable.

I knew going in that a lot of the article would be about my surgeries and their aftermath. Let's face it. Esquire wouldn't have assigned an article if I were still in good health. Their cover line was the hook: Roger Ebert's Last Words. A good head. Whoever wrote that knew what they were doing. I was a little surprised at the detail the article went into about the nature and extent of my wounds and the realities of my appearance, but what the hell. It was true. I didn't need polite fictions.

One strange result was that many people got the idea that these were my dying words. The line Chaz liked least referred to the time he has left. A blog reader said he hadn't realized I was so frail. Here's how Romenesko's Media News linked the item: 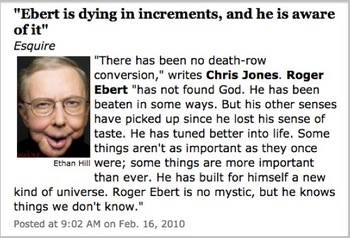 Well, we're all dying in increments. I don't mind people knowing what I look like, but I don't want them thinking I'm dying. To be fair, Chris Jones never said I was. If he took a certain elegiac tone, you know what? I might have, too. And if he structured his elements into a story arc, that's just good writing. He wasn't precisely an eyewitness the second evening after Chaz had gone off to bed and I was streaming Radio Caroline and writing late into the night. But that's what I did. It may be, the more interviews you've done, the more you appreciate a good one. I knew exactly what he started with, and I could see where he ended, and he can be proud of the piece.

I mentioned that it was sort of a relief to have that full-page photo of my face. Yes, I winced. What I hated most was that my hair was so neatly combed. Running it that big was good journalism. It made you want to read the article.

I studiously avoid looking at myself in a mirror. It would not be productive. If we think we have physical imperfections, obsessing about them is only destructive. Low self-esteem involves imagining the worst that other people can think about you. That means they're living upstairs in the rent-free room. 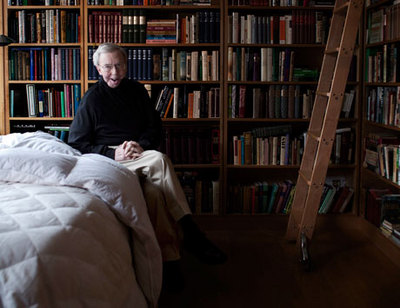 The Chris Jones article in Esquire.

My Esquire interview with Lee F---ing Marvin.. •The New York Times review of Chris Jones's "Too Far From Home: A Story of Life and Death in Space," by Janet Maslin. •All the solo photos of me were taken by Ethan Hill. Copyright © 2010 by Esquire magazine. • • •