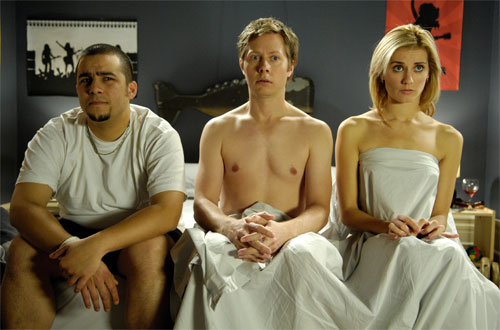 Ennis Ermer and Peter Oldring are roommates who co-star with Natalie Lisinska in "Young People F***ing."

In my previous blog entry, I told of receiving a message from a reader in Montreal who wanted know how I would deal with reviewing a new Canadian film with the f-word in its title. Would my paper print the title? What were my thoughts? I now have an opportunity to deal directly with those questions, because Steve Hoban, the film's producer, has sent me a DVD, along with a bulletin about its June 13 opening date in Canada, and a U.S. release later this summer.

Having seen the film and been pleasantly surprised by it, I now have more thoughts about the title, which is "Young People Fucking" on the print itself, and "Young People F***ing" in the advertising. I'm not convinced the title does the film any favors. Yes, it calls attention to itself and generates publicity, but it doesn't suggest that this will be a good-humored, thoughtful, observant film, which it is.

The dialogue sounds like these actors were assigned in acting class to improvise their characters discussing their situations. My notion is that real couples, especially those who know each other well, such as the Exes and the Couple, would spend a great deal less time talking than these people do. But, yes, the Friends might spend that much time, because they're negotiating the possibility of having sex with one another to eliminate all the bother of strangers. They have some good dialog: "Respect is like the opposite of liking someone," for example. Or the girl who changed her name from Dora Fox to Jamie because she liked that better, "And how was I to know he was going to start winning all these Oscars?"

The stories are not intercut; this is not a hyperlink movie, thank God, because then we might drown, not in a sea of sweat or sperm, but of dialog. No great lessons are learned. There is little high drama. As it stands, the screenplay could supply fodder for countless theatrical companies. It's...engaging, that's what it is. These are all essentially nice people. Canadians, you know.

My favorite situation, by far, is in the story titled The Roommates. Here we get Gord (Ennis Ermer) and his roommate Dave (Peter Oldring), and Gord's girlfriend Inez (Natalie Lisinska). Gord suggests Dave join him and Inez in bed. Dave, a quiet kinda guy, goes along with it. Then it turns out Gord would rather watch (while eating a submarine sandwich) than participate. Then Gord starts coaching Dave: "She really likes it when you grab her hair!" Then Gord's hand is on Dave's butt, which Dave does not appreciate. Finally all three are smoking cigarettes.

And so it goes. Not a great movie, but fun, and the title makes it sound cheaper than it is. I liked a sequence in which a girl employs a sexual device on her guy, who later complains that he said "wait," "stop," and "no." He complains, "When a girl says 'no,' that means to stop!" You have to admit he has a point.