I have watched with a kind of petrified fascination in recent years as the world creeps closer to what looks to me like disastrous climate change. The poles are melting. Ocean levels are rising. The face of the planet is torn by unprecedented natural disasters. States of emergency have become so routine that governors always seem to be proclaiming one. Do they have drafts of proclamations on file?

The political responses to this condition seem to fall along party lines. Democrats think legislation is needed Republicans don't want the feds interfering with private enterprise. Vested interests weigh in. Pork barrel projects are protected by lawmakers on both sides of the aisle. Washington fiddles. Earth burns.

I get stirred up more than many people, because I see so many documentaries. Yes, they're "biased." There's much less motivation for an "unbiased" documentary. Docs are usually made by people who have something they think you should know. There is little motivation for objectivity, something people forget when yet another doc comes along. And there are so many causes! Genetically modified crops! Chemical fertilizers! Trademarked genomes! The downside to wind power! An explosive-blowing doc like Chasing Ice comes along, and hardly causes a stir.

I write an entry. It rounds up the usual comments. We're stuck. Just today, however, a glimmer of hope shone on the political front. I read on Bloomberg: "President Barack Obama is preparing to tell all federal agencies for the first time that they should consider the impact on global warming before approving major projects, from pipelines to highways."

"Consider." Not the most electrifying word I can imagine. Yet consider the response. I read on: "It's got us very freaked out," said Ross Eisenberg, vice president of the National Association of Manufacturers, a Washington-based group that represents 11,000 companies such as Exxon Mobil Corp. and Southern Co. The standards, which constitute guidance for agencies and not new regulations, are set to be issued in the coming weeks, according to lawyers briefed by administration officials.

"Freaked out." You know what has me freaked out? I consider it a real possibility that millions now living will die as a result of the interests of the National Association of Manufacturers and its 11,000 members. 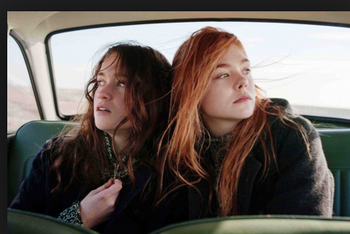 Sally Potter's new film centers on two teenage British girls (Elle Fanning and Alice Englert ) who get involved in the Ban the Bomb movement at the time of the Cuban missile crisis. I remember that time. On a weekday afternoon, Soviet warships bearing missiles were approaching a line drawn in the sea by President Kennedy. If they crossed it, JFK had vowed retaliation. Would our missiles take flight? Would the Soviet bloc Would there be war? We felt so powerless. Craning my neck to see over the heads of the crowd, I was jammed into the front lounge of the University YMCA. At a time like that you do not--you cannot--want to be alone.

This time the line has not been drawn on a map. This time the enemy, if we can use the word in this context, is an American lobbyist group. They seem focused on maximizing profits and shareholder benefits, at the cost of any environmental conscience. It seems possible that their policies will lead to a different kind of seasonal calendar. Instead of Winter, Spring, Summer and Fall, this new generation will know Blizzard, Flood, Heat and Fire. Month follows month as the seasons tear themselves apart.

I heard Cummings (or "cummings," if you prefer) in his destinctive lilting tremolo, at the University Auditorium, a year after the Missile crisis:

Thanks for the llnk to my Far-Flung Correspondent Anath White, in Los Angeles.