"Jesus was a Nazi. So's your preacher" 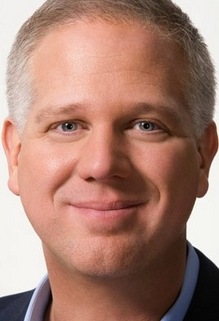 Pretty near everything Glenn Beck says strikes me as absurd, but he scored a perfect 10 when he warned his viewers against the dangers of Christianity. You already know all about it. Well, maybe not, because the usual defenders of Christianity, like James Dobson and Pat Robertson, were very quiet on the topic. Not even a peep from Pat about this man who showed every sign of having hired the best lawyers to draft his pact with Satan.

Many other Christians were not so silent. Dr. David P. Gushee, Professor of Christian Ethics at Mercer University, wrote: "He managed to do something few have been able to do -- speaking only of my own religious community, he has united Catholics and Protestants, evangelicals and mainliners, Christian progressives and moderates and conservatives." 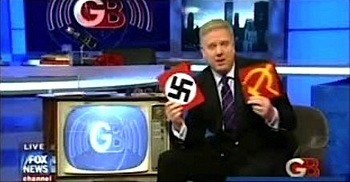 I was on the brink of picking up the phone and asking Francis Cardinal George if he was down on this whole social justice thing, but then I recalled that I no longer use the telephone. Do you suppose the cardinal texts? I know some priests pretty well, and two ministers I went to high school with, and a rabbi, and I have a Muslim friend who teaches that faith in Chicago universities, and I work with a Buddhist, but it's no use asking them. They're all down on this social justice thing.

What are the words "social justice" code for? Why, Nazism and Communism, says Beck: "Social justice was the rallying cry--economic justice and social justice--the rallying cry on both the communist front and the fascist front." Beck even went so far as to cite Jesus Christ, saying, and I quote: "Nowhere does Jesus say, Hey, if somebody asks for your shirt, give your coat to the government and have the government give them a pair of slacks." Well, Beck has me there. It is quite true that nowhere does Jesus say that. Nor, for that matter, does he ever say, A wop bop a lu bop, a wop bam boom! 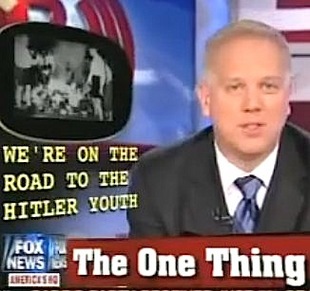 What I would enjoy hearing is one single clergyman from any faith in America, appearing on Beck's program to agree with him and denouncing social justice. Such a person might be a real piece of work. I suspect he might currently be in between congregations. Beck's oversight is that all religions teach social justice. That's sort of what they're about. "My church doesn't," said Beck, who is a Mormon. Not for the first time, he was dead wrong, and the mountains of Utah rang with the thunder of outraged Mormon elders. I know now, and did not know before, that before statehood the Mormons in the Utah territory provided universal health care and care for the poor as a matter of their duty.

What Beck has demonstrated, in a singularly inelegant way, is an increasing tendency of the extreme right to automatically describe its opponents in negative buzz words. You would think that if it's possible to be a conservative it's also possible to be a liberal. Not so. In the Beckian theology, a conservative is merely a conservative. Liberals are socialists, community organizers, Marxists, traitors, communists, haters, Nazis, elitists and, in general, liars. Conservatives, on the other hand, are moderates, patriots, reasonable, pro-American, and stand for family values. 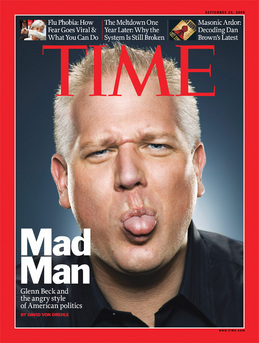 I am proudly a liberal. I am also patriotic, reasonable, pro-American, and stand for family values. Sometimes I stray from moderation. I do not remotely identify with the ideologies Beck wants to tar and feather me with. Nor, for that matter, could a genuine conservative identify with a flywheel like Beck. Conservatism is a political and ethical philosophy that exists in another universe from Beck's shopping cart. Remember that TV show where couples raced up and down aisles seeing who could jam the most loot into their carts? Beck loads up from the shelves of the Discount Screwball Supermart. He needs material to fill his daily hours of air time and fuel his fans with one-liners they can pass off as thought.

What is social justice, anyway? I think it involves civil rights and liberties. It involves a trial in a fair legal system. It involves freedom of speech and the practice, or non-practice, of religion. It involves a living wage and decent working conditions. As my father often repeated, "A fair day's work for a fair day's pay." Which of these areas does Glenn Beck believe the Communists and Nazis excelled in? Is he holding in reserve a secret cache of obscure speeches by Hitler? If his listeners heard those words (which real liberals and real conservatives subscribe to) emerging from Hitler's mouth, would they be confused?

Another quote from Beck. The Communists and Nazis "talked about economic justice, rights of the workers, redistribution of wealth, and surprisingly, democracy." Why, that proves it! Those are the very same things Christians talk about. And Democrats. And liberals. And find me, please, one single genuine Republican who doesn't also talk about them. We can gather that Beck disagrees with all of them. Even -- given his maladroit syntax -- surprisingly, democracy.

Beck has strayed way, way off beyond conservatism, to a land where reason itself is an evil conspiracy. This is a growing trend. In Texas, I learn from prisonplanet.com, "A prominent insider has told Infowars that Texas Governor Rick Perry and other establishment neo-cons have decided to deliberately target grass roots constitutionalists with dirty tricks campaigns in an effort to derail and hijack the growing liberty movement whose influence is threatening to blow the Texas gubernatorial race wide open." Yes. Rick Perry, indistinguishable from Democrats, mainstream Republicans, liberals, socialists, Nazis, elitists and believers in social justice. 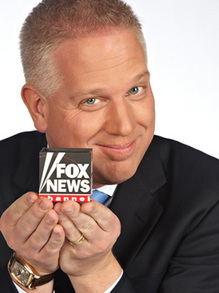 This whole argument is described by a term widely familiar on the internet, the reductio ad Hitlerum. It is also known, Wikipedia explains, as playing the Nazi card. Anyone using this argumentum, it is believed, is signaling that his logical facility has jumped the rails. It is frequently used in a reflexive sense, as when your opponent accuses you of doing the same thing: "You guys called Bush a Nazi, so it's all right for the Tea Partiers to call Obama a Nazi." To the extent that this is accurate, it is an appeal to -- why, one's sense of social justice, actually.

I am writing this because I have a blog and I needed to vent. I am told repeatedly that Fox News is fair and balanced, that it has the largest share of the (actually rather small) cable news audience, and that it speaks for ordinary Americans. To the degree that this is true, Beck has left them all behind, watching his figure shrink on the far horizon of fanaticism. He has finally, definitively, said something that is completely Wrong from every viewpoint.

Does Glenn Beck speak for average Americans? His logic indicates they must be attending churches that preach Communism and Nazism from the pulpit every Sunday. Why are they so slow to catch on? Now that Beck has alerted them, where can they flee to worship? What will become of them? They have been cast out into the wilderness, where nothing makes sense anymore. The lonely, barren, ignorant wilderness, silent but for the gnashing of Glenn Beck. • • •Glenn Beck in his own words;