In search of redemption 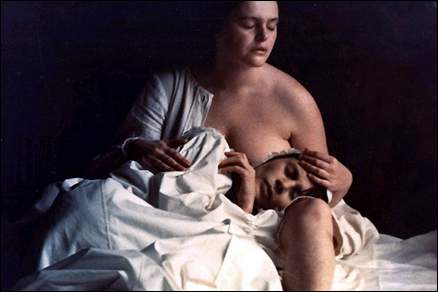 One of the most prolific and intelligent contributors to the comments section of the blog is Solomon Wakeling. I wrote in curiosity, asking to know more about him. He replied that he is a 24-year-old law student from Australia, and that one of his problems is, "I read too many books." There was one thing he said that I felt I needed to write about in the blog: "I find your work is filled with an essentially humanitarian philosophy, dealing with concepts like redemption."

The first half of his statement I hope is true. The second part is certainly true. Let us set aside all of the films that are essentially entertainments (although they have their uses and pleasures, too). I am thinking now about the remaining titles, which deal seriously with human lives. The ones that affect me most deeply are the ones in which characters overcome something within themselves or the world, and endure.

I'm often asked which movies made me cry. Without making a list (I hate lists of movies, which are so reductive), I'd have to reply that the deliberately sad films, the "weepies," rarely make me cry. What gets to me are the films about goodness--about people acting bravely or generously or in self-sacrifice. Consider a film like Spielberg's "Schindler's List." Its hero was not a great man in his own eyes, and his actions were at least partially self-serving. But with all of his imperfections and flaws, he set about to save a group of lives, and succeeded. That he succeeded is secondary to his effort, which was the main thing, although I confess that in the emotionally devastating final shot (showing those who would not be alive were it not for him), I cried. I was moved so deeply that they lived because of this one strange, eccentric, driven man.

Consider Eastwood's "Million Dollar Baby." Many were deeply offended by his action at the end. I myself disagreed with it on philosophical and personal grounds. I think he did the wrong thing. But he was certainly doing what the young woman desired, or thought that she desired, and I think he did it against his own wishes. He did not personally want her dead, or approve of euthanasia for that matter, but thought he was acting on her behalf. He was doing for her what she could not do for herself. What he did was consistent with the beliefs he had held up for her throughout the film. It was, for that man in that context at that moment, the right thing. So it's much more complicated, but, yes, I was moved. In all the frailty and fallibility of our poor human lives, he found the nerve to do what seemed to be merciful.

Or look at Kurosawa's "Ikiru," about an old bureaucrat who has spent his days in the meaningless shuffling of papers. Faced with a medical diagnosis meaning his own death, he tries at first to deny and escape. Finally, with the end approaching, he determines to achieve at least one good thing out of all the hopeful projects that found their ends by disappearing in his office. He wants to establish a little park for children. He succeeds, and at the end, in the falling snow, he is seen sitting on a swing in the park, dead. He has accomplished his good deed.

Consider, too, Bergman's "Cries and Whispers," the most emotionally devastating film I have ever seen. It was about a woman dying of cancer, and joined in her final days by her sisters, their husbands, and her maid. The sisters and the husbands were deeply disturbed, flawed, even evil. The maid, who had been patronized by them all through her life, felt pure love for the dying woman. There is an astonishing scene (only Bergman would have conceived it) where she bares her breasts and takes the dying woman to her heart, and comforts her with warmth and sympathy. It is the nudity that affected me most deeply: She was trying to remove all barriers of convention or modesty or shame, and to offer up her flesh itself to the dying woman, to say there was nothing she would not do for her. This gesture moves me even if I think back on it. Having already included Bergman's "Winter Light" in the Great Movies collection, I have lately been revisiting the other titles in Bergman's trilogy about the silence of God: "Through a Glass Darkly" and "The Silence" (1963). Few other directors have been more drawn to the fundamental torments that we share (Dreyer, Ozu and Bresson are often mentioned along with him). These three films are notable because of their difficulty of redemption. Because of madness or obstinacy or obscure psychic wounds, their characters find it so difficult to achieve. Their are buried in their misery. But there is a force within them that keeps on trying, keeps on reaching out, and I think Bergman's subject is that desire we feel, that hope, that is perhaps contained within the concept of God.

At the end of the day, films like these are what persuade me to be a film critic. My job is to call attention to them. They need not be so deeply serious, but they need to have that human generosity and goodness. If I were to say that even "Juno" belonged on the list, would you understand?