How to read a movie 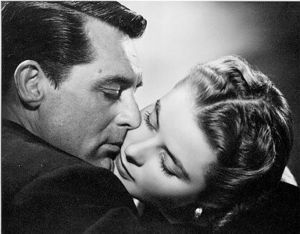 Above: Hitchcock's "Notorious" (1946). Bergman on strong axis. Grant at left. Bergman lighter, Grant shadowed. Grant above, Bergman below. Movement toward lower right. The attention and pressure is on her.

I've mentioned from time to time the "shot at a time" sessions I do at film festivals and universities, sifting through a film with the help of the audience. The e-mails I receive indicate this is perceived as some kind of esoteric exercise. Actually, it's something anyone can do, including you, and you don't need to be an expert, because the audience, and the film itself, are your most helpful collaborators. Of course it would be wise to research a film you hope to dismantle in public, and be familiar with its director and context, but I believe the process in its pure form could be applied to a film you've never even heard of. I want to tell you how.

This all began for me in about 1969, when I started teaching a film class in the University of Chicago's Fine Arts program. I knew a Chicago film critic, teacher and booker named John West, who lived in a wondrous apartment filled with film prints, projectors, books, posters and stills. "You know how football coaches use a stop-action 16mm projector to study game films?" he asked me. "You can use that approach to study films. Just pause the film and think about what you see. You ought to try it with your film class."

I did. The results were beyond my imagination. I wasn't the teacher and my students weren't the audience, we were all in this together. The ground rules: Anybody could call out "stop!" and discuss what we were looking at, or whatever had just occurred to them. A couple of years later, when I started doing shot-by-shots at the Conference on World Affairs at the University of Colorado at Boulder, the conference founder, Howard Higman, described this process as "democracy in the dark." Later he gave it a name: Cinema Interruptus. Perhaps it sounds grueling, but in fact it can be exciting and almost hypnotic. At Boulder for more than 30 years, I made my way through a film for two hours every afternoon for a week, and the sessions had to be moved to an auditorium to accommodate attendance that approached a thousand. 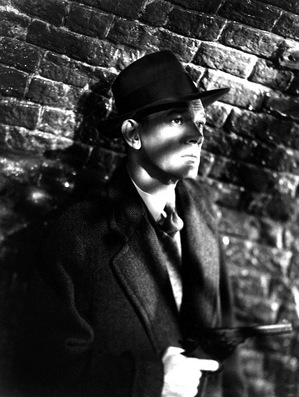 One thing I quickly discovered was that even much smaller audiences can contain someone who can answer any question. In "The Third Man," if a character spoke German, there would be a German speaker. If a scene required medical knowledge, there would be a doctor. A Japanese film at Boulder turned up Japanese speakers, experts on the society, students of the director. There would be somebody who could tell you what a Ford truck could and couldn't do. Or a rabbi, a physicist, an artist, a musician. When Criterion asked me to record a commentary track on Ozu's "Floating Weeds," I reflected that I didn't know a fraction of what Donald Richie or David Bordwell knew about Ozu (and Richie was already doing the film's silent version). How to talk for two hours about the visuals of a film where every scene is a single static shot? I took the film to Boulder, and together we discovered there was a rich abundance of things to say. 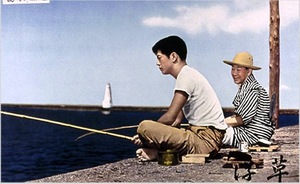 Of course you don't simply creep along and talk about what you're looking at. It helps to have a grounding in basic visual strategy. When the Sun-Times appointed me film critic, I hadn't taken a single film course (the University of Illinois didn't offer them in those days). One of the reasons I started teaching was to teach myself. Look at a couple dozen New Wave films, you know more about the New Wave. Same with silent films, documentaries, specific directors.

I bought some books that were enormously helpful. The most useful was Understanding Movies, by Louis D. Giannetti, then in its first edition, now in its 11th. He introduced me to the concept that visual compositions have "intrinsic weighting." By that I believe he means that certain areas of the available visual space have tendencies to stir emotional or aesthetic reactions. These are not "laws." To "violate" them can be as meaningful as to "follow" them. I have never heard of a director or cinematographer who ever consciously applied them. I suspect that filmmakers compose shots from images that well up emotionally, instinctively or strategically, just as a good pianist never thinks about the notes. It may be that intrinsic weighting is sort of hard-wired. I am not the expert to say. I can observe that I have been through at least 10 Hitchcock films and not found a single shot that doesn't reflect these notions.

I already knew about the painter's "Golden Mean," or the larger concept of the "golden ratio." For a complete explanation, see Wiki, and also look up the "Rule of Thirds." To reduce the concept to a crude rule of thumb in the composition of a shot in a movie: A person located somewhat to the right of center will seem ideally placed. A person to the right of that position will seem more positive; to the left, more negative. A centered person will seem objectified, like a mug shot. I call that position somewhat to the right of center the "strong axis."

Now what do I mean by "positive" or "negative?" I mean that these are tendencies within the composition. They are not absolutes. But in general terms, in a two-shot, the person on the right will "seem" dominant over the person on the left. Does this apply even to films from cultures that read right to left or top to bottom? From my treks through many Asian films, yes, it seems to. 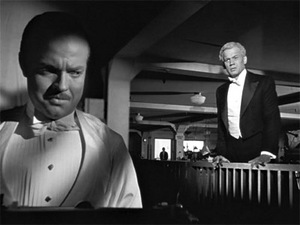 There are many other rules of thumb. I will outline some broadly, and if you're interested you can examine them in films, or read about them in books by such as Giannetti or David Bordwell (both often used as textbooks). They will not use the same terms, and by no means do I imply they would agree with me; I am summarizing my own beliefs, based on hundreds of shot-by-shot experiences over the years. But they are scrutinizing films with the same intense curiosity, and that's the real point. Consider Bordwell, whose great book on Ozu uses many panels of individual frames to illuminate a director who virtually never moved his camera, and yet whose compositions are alive with visual strategy.

In simplistic terms: Right is more positive, left more negative. Movement to the right seems more favorable; to the left, less so. The future seems to live on the right, the past on the left. The top is dominant over the bottom. The foreground is stronger than the background. Symmetrical compositions seem at rest. Diagonals in a composition seem to "move" in the direction of the sharpest angle they form, even though of course they may not move at all. Therefore, a composition could lead us into a background that becomes dominant over a foreground. Tilt shots of course put everything on a diagonal, implying the world is out of balance. I have the impression that more tilts are down to the right than to the left, perhaps suggesting the characters are sliding perilously into their futures. Left tilts to me suggest helplessness, sadness, resignation. Few tilts feel positive. Movement is dominant over things that are still. A POV above a character's eyeline reduces him; below the eyeline, enhances him. Extreme high angle shots make characters into pawns; low angles make them into gods. Brighter areas tend to be dominant over darker areas, but far from always: Within the context, you can seek the "dominant contrast," which is the area we are drawn toward. Sometimes it will be darker, further back, lower, and so on. It can be as effective to go against intrinsic weightings as to follow them.

Now let me walk you through a single shot from Hitchcock's "Notorious." The situation: Cary Grant, a U.S. agent, is in love with Ingrid Bergman, the daughter of a Nazi spy. He recruits her to go undercover and seduce a Nazi (Claude Rains) who has fled to Rio and is part of a plot. Consider that he has essentially called upon the woman he loves to live with (i.e., sleep with) another man, as her patriotic duty. He is conflicted about this, resents it, is jealous, begins to think of her as a slut ("notorious").

In the Rio office of U.S. intelligence, Grant's chief is positioned on the strong axis. Grant enters and talks to him, standing on the right (positive). Bergman enters, and begins to discuss her relationship with Rains. As she speaks, Grant walks to the left of the composition. She continues. He turns his back to us. We all instinctively read this as negative/rejecting/angry. Bergman goes into still more detail. Grant walks into the background. Wow. Now the picture has the intelligence chief as the stable presence on the strong axis, Bergman in the positive right foreground, Grant in the negative left background, and the "movement" from right front to left back, underlining the central emotional reality of the film, which will inform all of Grant's behavior. 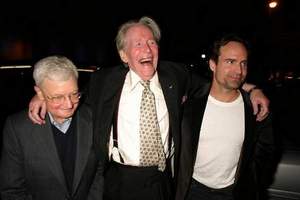 Of course I should employ quotation marks every time I write such words as positive, negative, stronger, weaker, stable, past, future, dominant or submissive. All of these are tendencies, not absolutes, and as I said, can work as well by being violated as by being followed. Think of "intrinsic weighting" as a process that gives all areas of the screen complete freedom, but acts like an invisible rubber band to create tension or attention when stretched. Never make the mistake of thinking of these things as absolutes. They exist in the realm of emotional tendencies. Often use the cautionary phrase, "all things being equal" -- which of course they never are.

You and those joining you will also find yourselves discussing color, lighting, shadows, construction, characters, dialogue, acting, history, sources, influences, and messages both obvious and buried. Anything and everything. It truly is a democracy in the dark. Everything worth noticing on the screen will eventually be seen by somebody. For example, I had been through "Citizen Kane" at least 30 times before I took it to the Savannah Film Festival, and someone noticed a detail I had never seen before. I write about it here.

Now you're on your own. DVDs make it so easy. Never be doctrinaire. Depend on the audience. If you want to see the process in action, Jim Emerson, the editor of this site, continues the tradition every April at Boulder. It's free and open the public, like the whole conference, which is like nothing else I've ever experienced. You can Google the Conference on World Affairs to get the times, places and dates..

"Notorious," "Floating Weeds," "The Third Man" and "Citizen Kane" are all in my Great Movies collection.