How I am a Roman Catholic

On Thursday morning, February 28, I found CNN featuring a continuous shot of a helicopter. The network cut between a close-up and a distant dot. It was Benedict, flying from the Vatican City. This was extraordinary attention for an ordinary cardinal, because as Benedict told the throng awaiting him, "I am no longer Pope." I am not a scholar of Catholic history, but I believe we were witnessing the first time the Papal throne was vacant while an elected Pope was alive.

"This no one can deny," wise Sister Rosanne told us during the 8 am theology class that began every day at St. Mary's Grade School. "The Church is the oldest continuously functioning institution in human history, and the Popes go back in an unbroken chain to St. Peter's blessing at the hand of Jesus." That was one reason people of all faiths or none desired an audience with the Pope. Or, as the fabled Chicago columnist Irv Kupcinet famously recalled it, "my audition with the Pope." How I wish I could find a photograph of the great moment, with Kup's wife Essie and her inscrutable smile. She had been photographed with kings, queens, Presidents, emperors and even Marilyn Monroe. Now this.

It was a little eerie. Benedict would sleep tonight in the summer residence of a man who no longer existed. The drive to Castel Gandolfo, down an avenue of genuflecting trees, led a procession of post-Papal limousines around a graveled drive and deposited a white-haired 85-year-old into the hands of polished young men all dressed in black, like pallbearers. His twitter account at @Pontifex read only "Sede Vacante," or "empty seat." From an encyclical to this.

The morning hour in religion was my favorite class. As we advanced through the grades, it began simply, in memorizing chapters from the Baltimore Catechism, and concluded in eighth grade with the four lives of Christ as told in the New Testament. We made a side tour through Genesis, observing it's "all the Jews have," but cautioning that it was written as a fable not to be taken literally. Some Protestants took it as fundamentalist truth, but not Catholics or modern Jews.

That led us toward the Theory of Evolution, which in its elegance and blinding obviousness became one of the pillars of my reasoning, explaining so many things in so many ways. It was an introduction not only to logic but to symbolism, thus opening a window into poetry, literature and the arts in general. All my life I have deplored those who interpret something only on its most simplistic level. I grant you that artworks like Andres Serrano's "Piss Christ" are hard to embrace and you will never find it displayed in my home, but I understand the impulse behind it.

Fr. J. W. McGinn at St. Patrick's Church in Urbana, with Pat Conerty, me and Bill Miller. At no time did I experiece or hear about sexual abuse in our Champaign-Urbana parishes. 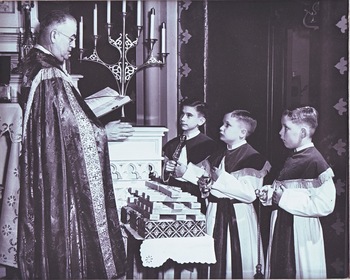 The nuns at St. Mary's were Dominicans They lived in a small square convent behind the school, holding six nuns (some taught two grades) and a cook and their housekeeping nun, who kept a sharp eye trained on us through her screen door. We had humble playground equipment, a swing set and two basketball hoops. Our principal sport was playing King of the World. This involved two boys standing on a log, each trying to push the other off. The housekeeper would open the screen door and shout, "If you break your necks, you have only yourselves to blame."

It was from these nuns, especially Sister Nathan and Sister Rosanne, that I learned my core moral and political principles. I assumed they were Roman Catholic dogma. Many of them involved a Social Contract between God and man, which represented classical liberalism based on empathy and economic fairness. We heard much of Leo XIII's encyclical "Rerum Novarum"--"On Capital and Labor." When I hear self-appointed Catholic "spokesmen" like William Donohue of the Catholic League, I wonder if he has come across it in his reading.

Through a mental process that has by now become almost instinctive, those nuns guided me into supporting Universal Health Care, the rightness of labor unions, fair taxation, prudence in warfare, kindness in peacetime, help for the hungry and homeless, and equal opportunity for the races and genders. It continues to surprise me that many who consider themselves religious seem to tilt away from me.

With my non-practicing Lutheran father Walter on Confirmation Day. at my grandmother's house, in second grade. 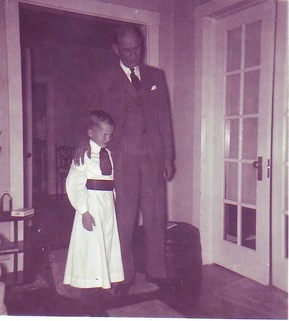 There are areas of disagreement. Is homosexuality a sin? In grade school circa 1950 we never discussed it, and I had never heard of it. By the upper grades I'd read about it in the novels of Thomas Wolfe and James Baldwin, but had little idea of the mechanics involved. Today the Church continues to regard it as a sin (not particularly rare in the priesthood, indeed rumored to be found even within the confines of Benedict's Vatican). His resignation might be related to weariness at his age at the prospect of dealing with a gay scandal not of his doing. My feeling is that love between consenting adults is admirable. The commandment about not coveting thy neighbor's wife had more to do with concepts of property in Old Testament times, preserved to this day in such fundamentalist societies as Saudi Arabia. In current practice that commandment has been twisted to political convenience, as our Second Amendment has been adapted to the convenience of gun lovers.

The great scandal in today's Church is of course child abuse. I have no idea what such surveys mean or what they're based on, but given how much I've read about it I was surprised to learn that only a little more than four percent of today's clergy seems to have been involved in it.

Birth control? Here I subscribe to an unofficial "double" loophole often applied in practice by Catholics faced with perplexing choices: Do that which results in the greater good and the lesser evil. I support freedom of choice. My choice is to not support abortion, except in cases of a clear-cut choice between the lives of the mother and child. A child conceived through incest or rape is innocent and deserves the right to be born.

I consider myself Catholic, lock, stock and barrel, with this technical loophole: I cannot believe in God. I refuse to call myself a atheist however, because that indicates too great a certainty about the unknowable. My beliefs were formed long ago from good-hearted Dominican sisters, and many better-qualified RCs might disagree. One of the few Catholic priests I've known well is my Michigan neighbor Fr. Andrew Greeley. On Saturday afternoons on his bluff overlooking Lake Michigan he would celebrate Mass for a congregation occasionally containing some Daleys. Greeley wrote an outspoken liberal column for the Sun-Times and other papers, and his 1981 novel Cardinal Sins helped bring about the downfall of Chicago's John Cardinal Cody.

One Saturday after Mass he invited me and our friend John McHugh to join him as he threw some steaks on the grill. The conversation arrived at the appearance of Our Lady near the town of Knock, where a controversial airport was built, large enough to handle 747s. What was Greeley's opinion?

"The appearance that seems most persuasive," he said, "was at Lourdes, where she was short, dark, dressed humbly in brown, and asked us to love another. Many of the other times, she is tall, blonde, well-dressed in blue and white, and asks us to vote Republican."

My related blog entry, How I believe in God.