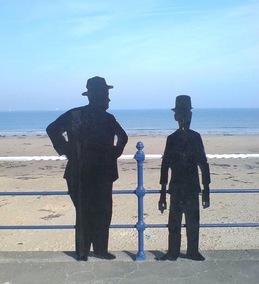 What we can't seem to accept is that the oil is leaking and we can't stop it. This doesn't fit the modern narrative in which we can fix anything if we get organized and throw enough money at it. An earthquake devastates Haiti? The world rushes to its aid. A tsunami wreaks havoc? Emergency teams descend. Swine flu? We get inoculated. The economy collapses? Bail it out.

This pattern has become embedded in cable news. First, the story is "Breaking News." Then it's assigned a catch-phrase, a graphic, maybe even its own theme song. Then comes an airplane crash, a hurricane or forest fire to change the subject. We mourn, we repair, we prevent, we blame, we pass laws, we raise standards, we know the drill.

But the oil keeps leaking. We learn it will leak for weeks, a month, two months, four months. It is leaking 10,000 barrels a day, 20,000, 40,000, 60,000. British Petroleum lowers a pipe to drain oil from the leak. Some oil does drain, but the latest news suggests the pipe may have "exacerbated" the situation. "Exacerbated" means "made it worse." Corporate spokesmen love Latinate words that make them sound as if they know what they're talking about.

I have no idea what to do about the Spill. Do you? Does anybody? We keep hearing that an enormous explosion could shift so much of the ocean floor that the leak would be plugged. That sounds like the system we used as kids to contain garden hose floods in a sandbox. 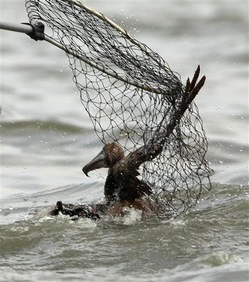 I follow the news, and a sense of frustration and futility grows. The Spill has become the subject of political debate. The Right, which makes a specialty of saying "we told you so!," says "We told you so!" The Left, which has the same specialty, says the same thing. Both Right and Left specifically did not tell us so. The Greens told us so. The Right is generally hostile to Greens, the Left not so much, but Greens belong to neither party, and believe they are speaking for everyone.

No modern American president can afford to halt offshore drilling. We liberals mocked Sarah Palin's "drill, baby, drill!" because she wanted to drill in the Arctic National Wildlife Refuge. If there's anything liberals love more than Sarah Palin does, it's wildlife. Obama called for restraints on offshore drilling, but we see no sign of him doing that. Can he? The globe's oil resources are finite, but much more finite is the U.S. ability to increase its debt. 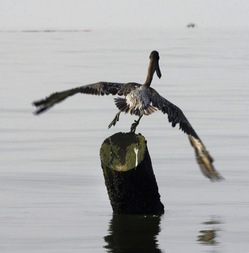 There's obviously only one remedy: An energy revolution. We must reduce consumption and develop clean energy alternatives. We try to avoid this overwhelming fact. By "we," I don't mean North America, but most of the world, specifically including China and India. In America, we can't even spend money on new energy without lobbyists making sure the money is spent with the right people in the right ways. The ethanol bubble is an example of that. We need to grow more corn no more than we need to burn more oil.

Obama is under relentless attack now from the Right. That's a great help. I have been arguing in his defense, asking, please, what can he do to "handle" the crisis? We are told he hasn't seemed "concerned" enough. He flies to the Gulf states for his fourth trip and is attacked for having a goddamn ice cream cone. He expresses concern. He says he's mad. He gives a speech from the Oval Office in which he comes up with no answers because there are none. "This is Obama's Katrina," shouts the Right, forgetting that they said Bush did a good job with Katrina. 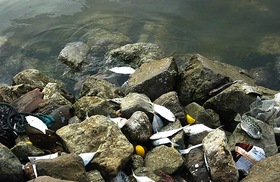 The difference is, Bush could have done more with Katrina, but I don't see what Obama can do with the Spill. He's instructed: "Take personal command!" Should the President be our go-to guy on oil spills? "Express more emotion!" What is he, a head of state like the Queen, delegated to going places and looking concerned? He can try to pass some energy legislation, but both parties are in the pockets of Big Oil. Those few legislators who work for meaningful federal solutions are pilloried as "socialists." God help us if we should attempt to slow the eagerness of corporations to consume us.

And the oil keeps leaking. I fantasize that we will finally be reduced to trying that big explosion. What if the explosion disrupts a nearby oil rig? What if it opens a second reservoir? What, for that matter, if we don't do that, but there happens to be a coincidental explosion on another rig?

A great wound has been caused to our planet. The ecology of an invaluable region has been grievously attacked. Even state governors who are hostile to the Greens express themselves concerned, if not with marine life or birds or plants, with the "impact on tourism." 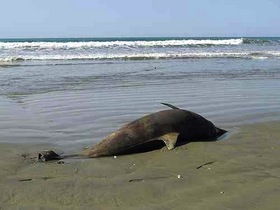 We humans as a species developed on a vast savannah without the ability to run and fight as well as the other beasts we found there. But we could think. In doing so, we built civilizations, spread to all the continents, and prospered. For energy we used fire and water. Then steam. Coal replaced wood and peat. We had a decent global civilization going before we started drilling for oil big-time. We had cities, transportation, education, religion, culture, entertainment, economies. Some people fared better, some worse, but it is always so.

Oil is a convenient fuel for things we have come to believe we need. Automobiles. Airplanes. Air conditioning. Electricity is useful for such matters as lighting, television, the internet and traffic signals, but although I am no engineer I suspect we could produce a great deal of our electricity from alternative sources. Why doesn't every house have solar panels? Why doesn't mine? If we had no oil and were "thrown back to the Middle Ages" would that mark our end as a species, or rather just a transition back to an earlier state?

Here's what I think right now. The President and Congress should declare an energy emergency. Some of you are old enough to recall the great oil shortage of 1973, when the OPEC countries shut us off. The national speed limit was reduced to 55 mph. Daylight savings time continued year-around. In Chicago's Loop, the skyscrapers no longer burned their lights all night long. At the Sun-Times, every other light was turned off. Automobiles grew so much smaller that many young people today can hardly believe the size of, say, a 1969 Cadillac. 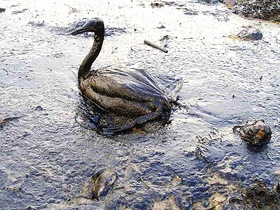 That was long ago. Modern housing uses track lighting to beam spotlights into every nook and cranny. Kitchen appliances do everything that was once done by hand. I don't even want to know how much energy an electric dishwasher consumes. For the first 35 years of my life I washed the dishes by hand, and didn't feel particularly inconvenienced. People used to use clothes lines. I know it sounds incredible. My dad had a mantra: Turn out the lights when you leave the room! Now you drive down a street and see whole houses illuminated, room after room.

Obama could ask us to turn out our lights. He could move up a deadline for mandating hybrid and electric automobiles. He could impose restrictions on needless public lighting. He could make a real effort to improve rail transportation. He could pour money into alternative energy. We could learn to open the damn windows when it's a mild day outside. All of this would only be the beginning. Big changes are coming, sooner than we want. They have nothing to do with Republicans or Democrats. They have to do with learning to live without greed--in our personal lives, in our corporations, in our government. 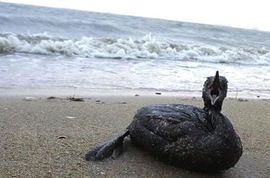 I mentioned I've started a program of reading books again. I just finished that novel by Dickens. Good to the last word. It takes place just as the railroad was being introduced. The characters walk around London, or sometimes use carriages. Rooms are heated individually. Nobody thinks about these hardships; they're more concerned with their own happiness or sadness.

To get away from the internet, I find it works to physically leave the room with the computer in it and sit in another room. Last night, finishing Dombey and Son, I settled into a nice chair and turned on the floor lamp. I turned off no less than six lights that were embedded in the ceiling. I began to read, and it felt good. I realized I was seated in a warm cone of light just exactly right for my purposes. I remembered such a reading space from my childhood, when I sank into my dad's big old chair and started on some Edgar Allan Poe horror stories. They were better without a lot of light.