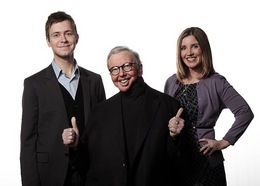 A message from Chaz and Roger: Thank you for your positive feedback on our Classics From The Vault segments on "Ebert Presents." We are happy to provide these vintage shows augmented with discussions from Christy and Ignatiy, instead of running reruns of our First Season shows, or instead of going off the air for the summer season.

For those of you who don't know, August and September are two of the months when public television stations broadcast their Pledge Weeks in order to raise money for their programming year. That is why we have been pre-empted in some markets, and moved to a different time of day or to a different day altogether, in other markets. The new fall season for public television traditionally begins in October, and indeed, our first new show of the fall season will air on Friday, October 7.

Until then, we hope you continue to enjoy the vintage shows with Roger Ebert and Gene Siskel. We chose the theme shows very carefully from a group of shows, and they are just as enjoyable now as when they were originally shot. We also chose to have Christy Lemire and Ignatiy Vishnevetsky contribute to these shows to make a seamless transition between present and past.

If anyone would like to contribute to a Pledge fund specifically for Ebert Presents At The Movies, please contact us.