Darwin survives as the fittest

Roger Ebert February 11, 2009
Tweet
On February 12, we celebrate the bicentennials of two of the greatest figures of the 19th century: Abraham Lincoln and Charles Darwin. In hailing Lincoln, bells will peal from sea to shining sea. The same date is also designated around the world as Darwin Day, and in Shrewsbury, Shropshire, his birthplace, a cake with 200 candles will be presented in the Square, and everyone will be offered a slice. If you're of school age, living in Shropshire, and your birthday is Feb. 12, the city invites you to Darwin's Birthday Bash. This is a grand celebration for a man whose Theory of Evolution promoted atheism, inspired Hitler's genocides, and thinks your grandfather was a monkey.
Advertisement

None of those things are true, but such claims are what I've been dealing with since Dec. 3, 2008, when I published a blog entry praising Darwin's Theory and castigating Ben Stein's documentary "Expelled," which claimed the opposing theory of Intelligent Design was being silenced in a crime against freedom of speech. That entry has so far drawn some 280,000 visits and inspired nearly 1,300 comments comprising some 145,000 words, every one of which I have read. The thread is still active and growing every day. 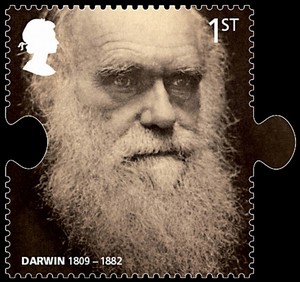 Darwin's Theory has been much developed and improved by countless scientists over the years, most dramatically since the discovery of DNA--which Darwin knew nothing about, but which uncannily supported his theory and revealed the mechanism by which it works. The Theory has been called "the best theory in the history of science." Intelligent Design, on the other hand, has been described as a pseudoscience and Creationism in Science's clothing. A federal court decision declared it a subterfuge to smuggle a religious belief into tax-supported schools.

Nonetheless, the debate, which is not taken seriously in any other nation on earth, may never be over; my thread alone still draws new comments. Some of the supporters of ID are civil and sincere; others inform me I am going to Hell or simply quote scripture at me. A lot of ID advocates repeat the same arguments over and over, apparently lifting them from ID websites, as if they had not been pretty well exhausted in the preceding comments, which total more words than A Tale of Two Cities, a reading experience you will find much more enjoyable.

As the self-appointed referee in this particular match, I declare Darwin the winner. If you don't agree, please read the comments yourself.

Why do I have a horse in this race? I'm not a scientist. No, but I am an intelligent, curious person who years ago became fascinated by the Theory of Evolution because of its magnificence, its beauty, and its self-evident truth. To study it is to see pieces falling into place. It appears to describe a process that takes place throughout the universe, in the struggles of molecules and the collisions of galaxies. As Darwin went on the voyage of the Beagle and produced journals of his observations of flora and fauna, so I have returned from my voyage through all of those comments, with my own notes. Here are some species I have observed:

The True Believers. Found in both parties. One side declares God without any doubt does exist, and created the universe and everything in it. A much smaller subset of this group is convinced that God did this in fairly recent times--as little as 6,000 years ago, or in any event too recently for Darwin's evolutionary process to have had enough time to take place. The other side declares that God without any doubt does not exist, and it is equally certain. Both sides frequently quote the Bible, on the one hand citing its truth, on the other side citing its falsity. Christianity is the only religion involved; my blog has readers from all over the world, but apparently those from elsewhere find Intelligent Design a uniquely American notion.

The Reasonables. Surely we can all get along, people. There is room in evolution for God, and room for God in Evolution--if you will simply agree to push God back a little further, even to the First Cause. There is an overlap between science and belief.

The Metaphysicians. It's all too deep for science, and too universal for religion. Everything exists in a sort of cosmic karma, or Universal Soul. Sometimes these people cite recent discoveries in quantum physics, which, they report, says that nothing is really there, or everything is in the same place, or that time happens all at once, or that time is an illusion. Little that these people say gives evidence  they know more about quantum physics than anyone else, except actual quantum physicists, who keep saying how little they understand.

The New Agers. Forget this need to nail everything down. Regard a sunset. Pet a cat. Read poetry. Meditate. Get in touch with your inner child. Find your Zone. Make love. You will solve nothing, but you won't feel the need to.

The Hard-Noses. Enough of this shilly-shallying around. Science is a field where you have to play by the rules. There is such a thing as the Scientific Method, which scientists all agree on, and it outlines the general principles by which research and experiment must advance. Evolutionists say they practice the Method. ID advocates say they do, too. Evolutionists say they have demolished every ID argument. ID advocates respond with Irreducible Complexity. Evolutionists reduce it. ID responds with the Anthropic Principle, which argues the universe was designed to reflect finely-tuned laws that permit us to exist. Evolutionists argue that the universe came first, and then life evolved, so we are by definition suited to it.

The Playing it Safers. What do you have to lose by believing in God? If you're wrong, you're wrong. If you're right you get to spend eternity with Jesus. The possibility of spending eternity with any diety other than Jesus is not much discussed. The evolutionists respond to this: What do I have to lose by trusting my own conclusions? If I lead a good and blameless life, why should I be kept out of heaven, while an evil man could convert on his deathbed and make it in under the wire? Is God a lawyer?

The Conspiracy Theorists. The whole theory of evolution is only a device used by atheists, leftists, liberals, terrorists and perverts to corrupt our youth. The response: No, actually, it isn't.

And so on. In replying to several hundred of these comments, I have made it clear I subscribe to the Theory of Evolution. I have tried to be calm, reasoned and factual in my responses. I have made public no opinion in the existence or non-existence of God, which to some makes me an agnostic, and to others a moderator.

1. Do not confuse the everyday use of the word theory with the rather strict scientific definition of the word. Anyone who says things like, "It's only a theory," or "let both theories be taught" does not, unfortunately, know what a scientific theory is. If the person making that statement is running for public office, he or she is either uneducated or deliberately intending to mislead. The dictionary is very direct, and I have not changed a word:

2. Science has no opinion on the supernatural. It cannot. Science deals with that which can be studied or inferred by observation, measurement, and experiment. Supernatural belief is outside its purview, except in such social sciences as sociology, anthropology, and psychology, where even then not the validity of the beliefs but their effects are studied.

3. The Theory of Evolution does not require that you abandon your religion, or vice versa. This despite the assertion of a Darwinian like Richard Dawkins that, logically, it does. That's his opinion. A great many scientists subscribe to religion, and a great many religious people subscribe to the Theory. No insomnia has been reported, and they all seem content with their conclusions.

4. Neither the Theory of Evolution nor Intelligent Design knows how or why the universe was started, or how life began. Evolutionists are happy to agree with this. ID advocates cite phenomena they say could not have been produced without Intelligent Design. But you cannot prove a negative. And in the ID examples so far cited, evolutionists have explained how they could have been produced through evolution.

5. Darwin did not say your grandfather was an ape. He was not even present when that possibility was raised. Darwin hypothesized that all species share common ancestors, if you follow far enough back along the evolutionary trail. In John Tierney's article in the Feb. 20 New York Times, we learn that the urban legend was started in...

theory |ˈθēərē; ˈθi(ə)rē| noun ( pl. -ries) a supposition or a system of ideas intended to explain something, esp. one based on general principles independent of the thing to be explained: Darwin's theory of evolution. • a set of principles on which the practice of an activity is based: a theory of education | music theory. • an idea used to account for a situation or justify a course of action: my theory would be that the place has been seriously mismanaged.

[Thomas] Huxley's famous 1860 debate in Oxford against Bishop Samuel Wilberforce, who scornfully asked Huxley whether he was descended from an ape through his grandfather or his grandmother. Huxley had the last word years later, when the bishop died after being thrown headfirst from a horse.

"His end has been all too tragic for his life," Huxley wrote in a letter. "For once, reality and his brains came into contact and the result was fatal."