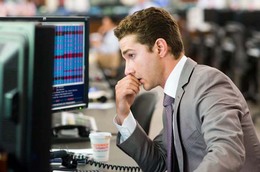 The way Michael Douglas and Oliver Stone explained it to me, modern Hollywood is doing the same thing modern Wall Street is: Trading for its own benefit, and not for the good of its customers.

"Let put it this way," Stone said. "If you look at the figures at Goldman Sachs, 67% of their profit in 2008 came to their own house. They made most of their money for themselves and 11% for their customers. That's a huge difference from

my father's era when all these houses, were essentially agentary houses; they were agents. It's like our business; the agents took over."

His father was a stockbroker. Michael Douglas's father was a movie star. They grew up at about the same time in two company towns.

"For an analogy," Douglas said, picking up, "traditionally, your agent worked his ass off for you and got a 10% commission. Then the agents said, wait a minute, we'll put our clients together, we'd get a package in commission and we'll do this and well do that, and--the next thing you know, you're working for the agency." 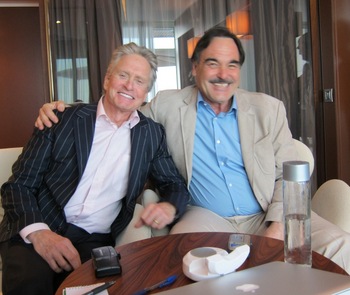 Stone said: "...then they're buying real estate, they're buying television. Now they're expanding into other things. Like they have sports people. Ron Meyers was Michael's agent and now he's still the longest-running head of a studio, because he always got somebody else to take the fall."

This was on the day their new movie, "Wall Street: Money Never Sleeps," premiered at Cannes. It picks up Gordon Gekko's story after he's released from prison, and involves his relationship with his daughter Winnie (Carey Mulligan), her fiancé Jacob (Shia LaBoeuf), the man who brought Gekko's film down (Josh Brolin), and Jacob's father figure (Frank Langella). There's also a reprise of Charlie Sheen's character from the earlier picture.

LaBoeuf shares the lead in this story with Douglas, and we enter a Wall Street populated by traders who work single-mindedly in their own interests, and start baseless rumors for the sole purpose of driving down stocks they've shorted.

The movie opened here to decidedly negative reviews from French critics, but the buzz I hear suggests the American reviews may be more positive. Some critics said the romance between LaBoeuf and Mulligan isn't a good fit with the financial stuff, but (a) how could it be? and (b) it turns out to be a better fit than you think. 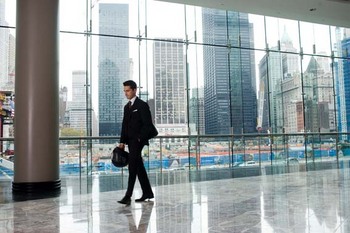 My hypothesis is that the English language might have been a barrier. The French critics are generally strong in English, but the English of "Wall Street" includes such impenetrable as "derivatives," a word it turns out few people in America understand. I remember Spike Lee telling me why "Do the Right Thing" didn't win a major prize here: "There is no way subtitles could capture the language in the film." Imagine subtitles or non-native speakers trying to deal with dialogue that sounds sometimes like a Jim Cramer rant. Douglas and Stone had a huge hit with their original "Wall Street" (1987), in which Douglas's character Gordon Gekko famously decreed, "Greed is good." The film was intended as a warning about a culture of greed in American finance, but anecdotal evidence suggests it became an inspiration. Young man saw it and wanted to grow up to be just like Gordon Gekko. 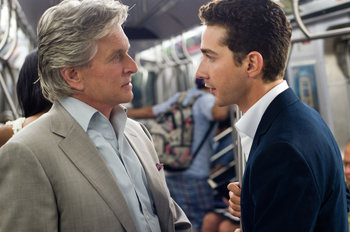 "I remember how kinda stunned and surprised we were with how strongly they embraced this insider trader image," Douglas said. "You know, the company wreckers, destroying companies, and all they saw was the exterior, not the value. I can imagine all those MBAs 22 years ago are probably the heads of investment banking companies now. Because nothing seems to have changed. There is no sense of, you know, looking into the mirror."

"It's a casino with insiders," Stone said. "When you go to a real casino, you know the odds are against you. In Wall Street you don't even know the odds; you don't know what you're doing." 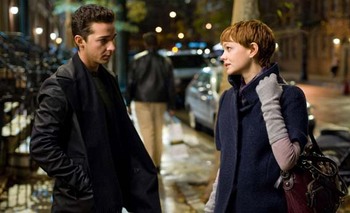 "Unless you're inside, you're outside, and nobody's really got a chance," Douglas said.

This was in a hotel on the Croisette, overlooking the beach and the festival and lots of people who no doubt felt their ideas for films didn't have a chance. Not that it's a perfect parallel, but American movie distribution does seem increasingly to be a system run for the house, which hammers huge grosses out of audiences before they find out that the game is stacked against them.

"I love the line that Gordon says," Stone said. "You never got it, kid, it's just a game. It's not about the money, it's just a game. They lose sight of the actual worth of the money. It's about beating the other guy. I was with Rupert Murdoch the other night and it was very warm and he was, like, saying money is fungible. It's not about the money, it's about what you do with the money. He'd rather run a media empire. Other people would take their money and they'd wanna transfer it to something else, like take over a bank or swap mortgage home loans. It doesn't matter; it has no social purpose. 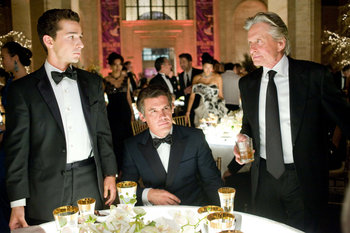 "I think Rupert has a social purpose but I'm talking about what the banks are doing. They bundled off the loans to every other bank and they started counter-trading each other. The most dangerous moment was when the money markets closed on that horrible week in September. That was the crush point."

He talked about Greece, and J. P. Morgan in World War One, and other things, and it boiled down to: The financial system is gambling with people's assets in order to maximize paper profits, and the figures are stacked so high you can't find the underlying value, and the structure has grown too large to fail. Oh, and nobody on Wall Street cares, because, as the movie makes a point of demonstrating, many investments decisions are inspired only by the size of the bonuses they will generate.

"Oliver," I asked, "tell me one thing. What do you think is a safe investment today?"

"Gold is good as long as you carry it." Douglas said. "I would diversify, you know, keep diversifying. Buy art, buy real estate, buy a little bit of everything."

"Don't you think Michael is looking more and more like Kirk?" Stone asked.

"Kirk," Michael said, "told me one day he was watching television when one of his old movies came on. He's looking at the movie and he can't remember it, and he says, 'wait a minute, that's not me, it's Michael'."