Are women better than men? 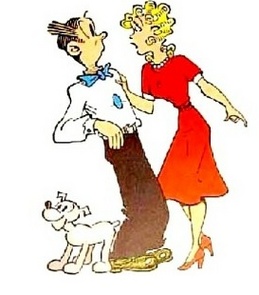 Sometimes I think so. Sometimes, not so much. If the blog I wrote a few weeks ago had started that way, I would have been spared a lot of grief. It better expresses what I was unsuccessfully trying to say.

The actual headline was "Women are better than men." And that called down upon my head 408 comments, at least 80 percent hostile, and many surprisingly angry and insulting. This blog has traditionally been known for the civil tone of its comments, and now I was informed, for example, that I was a "feminist bitch."

That I was wrong is a given; no sweeping generalization like "women are better than men" can possibly be true. Readers correctly asked me what I'd think about a headline like, "whites are better than blacks."

The blog was filled with qualifiers, but never mind. I had a point I was trying to make and I did a bad job of it. Strange how this is clear to me now, and how invisible it was at the moment I clicked on "publish." I'd been living in a fantasy land (what my friend McHugh calls, "intoxicated by the exuberance of his own verbosity"), and I got a bucket of cold water on my head.

One reader was helpful, quoting Virginia Woolf: "It is fatal to be a man or woman pure and simple: one must be a woman manly, or a man womanly." That would be the ideal, that men have more "feminine" qualities, and women more "masculine" ones. It is not that I want everyone to be the same. My hope is that all people will become more empathetic.

Some web comments I read accused me of falling prey to the "feminazis." Why is feminism such a threat to some men? What is the message they're picking up? Rush Limbaugh, who coined the word, apparently finds it works with his listeners. What do they fear? I suspect men who dislike feminists are telling us something unpleasant about themselves.

What would the opposite of feminism be? Perhaps it's reflected in the belief that men are the God-appointed heads of families, and dutiful wives are subservient to them. That many women apparently agree with this is a puzzlement, associated in my mind with the general assumption that God must be a male. Since it is impossible to know the nature of God (if there is a God), whatever attributes we assign to God are only reflections of ourselves. This is equally true of those who refer to God as "she." The correct pronoun would be "it."

But I stray. What also interested in the aftermath of the ill-advised blog was the nature of anonymity. On the internet nobody need really know who you are. You can create a fake persona or a fictional email address. You can sign yourself "anonymous." Behind that facade you are free to say almost anything, without taking any responsibility.

This seems to be an attractive opportunity for countless users. I will not speculate on their gender or age, although I have some good ideas. The comment areas on sites like YouTube and IMDb are wastelands of vulgarity, stupidity, cruelty and illiteracy. When I started a blog I vowed that would never happen here, and I personally vet every comment. As a result, I have to delete only three or four comments a week, usually for personal attacks (on another commenter). Because the comments here are generally literate and civilized, they don't provide encouragement for drive-by postings from Anonymous.

And who is Anonymous, anyway? When I check out my spam filter from time to time, I find dozens of posts from Anonymous, most of them long and insane, with product names like Nike repeated in them. Someone can explain to me what these spammers hope to achieve. Then there are real people who sign themselves "Anonymous." Barbara Scharres of the Siskel Film Center wrote me daily reports from Cannes, and got several comments praising her work that ended with the initials "RP." Barbara was intended to know who they were from, but not us. Why not just sign in as "RP," and escape being lumped in with Nike spammers? I wish RP would explain the reasoning.

I was amused to find that my comments in praise of women were interpreted on some right wing sites as evidence of my liberalism. The well-named writer Bruce Goad, the one who called me a "bitchy lesbian," was only getting warmed up:

"Ebert's verbal genuflection before the Giant Invisible Goddess Vulva is nothing new. Nor was it as cringe worthy as other recent spectacles of public male self-neutering such as the unconsciously hysterical, vagina-dessiccating 'Dear Woman' video compiled by a group of ex-men offering 'a collective apology on behalf of their gender.' It wasn't as abjectly self-deballing as the recent trend of progressive boy hamsters holding 'I Am a Feminist Because...' placards in what appear to be last-ditch attempts to get laid. It is merely the latest example in a decades-long tradition of men taking pride in taking shame in being men."

No writer who misspells "vagina-desiccating" is safe in bringing up the notion of shame. Nor does his invention of this phrase show much familiarity with the vagina. I have never encountered a desiccated vagina in my life. Have you?

But now I'm just goading, and all I intended to do was illustrate the assumption that only a progressive boy hamster could see a good side to feminism. Why does it have anything to do with politics? Is it correct for right-wingers to despise feminists? Why? Can a right-wing woman be a feminist?

Even as I write I realize what a fool's mission I was on in posting my original blog entry. I've learned on this site that there are a few issues one addresses at risk, among them Creationism and universal health care. I'll open my comments in the morning and find dozens from writers who have never commented here before, but have come here fresh from being inflamed by a pro-Creationist or anti-health care site. Often nothing they write shows any evidence they're read what I've written. They're frequently responding only to their interpretation of a headline. But this is where I came in.