A Superwoman for Kenya, but America is still waiting for Superman 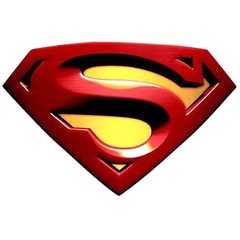 Sometimes two films set up an uncanny resonance with one another. I saw two documentaries back to back. One filled me with hope and the other washed me in despair. They were both about the education of primary school children.

"A Small Act" centers on the life story of Chris Mburu, who as a small boy living in a mud house in a Kenyan village had his primary and secondary education paid for by a Swedish woman. This cost her $15 a month. They had never met. He went on to the University of Nairobi, graduated from Harvard Law School, and is today a United Nations Human Rights Commissioner.

"Waiting for Superman" studies the failing American educational system. Oh, yes, it is failing. We spend more money per student than any other nation in the world, but the test scores of our students have fallen from near the top to near the bottom among developed nations. Our scientific and medical institutions employ so many Asians for a clear reason: They must be recruited. There are not enough qualified American students.

Both films are powerful. Seen together, they are devastating. They both end in the same way, with a competition among young students to allow them to continue their education.

In Kenya, they take a test. A high enough score will win them a scholarship from a foundation established by Chris Mburu. Without that, their families cannot afford education, and their life prospects will change. In America, they hope to have their names chosen in a lottery. If they win, they will be accepted by a desirable magnet or charter school. Without that, they will have to attend the public schools available to them. Local educators agree about these schools: They are often bad schools, known within the school system itself as Dropout Factories. Students do not learn, their test scores drop year after year, only a very few find their way to the college level. This is a national phenomenon in the United States.

Both movies are blunt about the reasons some students succeed and others fail. It has nothing to do with their intelligence. In Kenya, it is a matter of poverty. Most families want their children to attend high school, seeing that as the key to success in life. They lack the money, but Recently, Kenya has been able to make primary education free.

In the United States, it is a matter of teaching. "Waiting for Superman" argues that the greatest enemies of American primary and secondary education are the teachers' unions. Yes. This is not an anti-labor film. It was made by Davis Guggenheim, whose last documentary was Al Gore's "An Inconvenient Truth." Among those at Sundance in support of it was Microsoft's Bill Gates, who appears in it. Liberals.

There are countless dedicated public school teachers in our nation. Guggenheim made a doc in 1999 focusing on them. But educators and the teachers themselves acknowledge that schools have teachers who are not merely incompetent, but even refuse to teach. Protected by the tenure guarantees in their union contracts, they cannot be fired. In some schools, their rooms are referred to as Classrooms of Death. A student assigned to them will fail. Principals know this, and every year engage in something variously known as the Lemon Dance or the Turkey Trot, transferring bad teachers to other schools, and praying that the new teachers they get may be better. 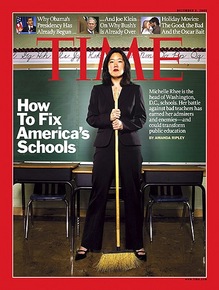 Tenure is a sacred concept in higher education, attained after years and rigorous peer review. In primary and high schools, it comes automatically after as few as two years. Tenured teachers have a job for life. They cannot be fired for proven incompetence. The American Federation of Teachers and other unions fiercely protect their jobs.

The film focuses on Michelle Rhee, the reformer who became Chancellor of the public schools in the District of Columbia, which are the worst in the nation. She wanted to award bonuses to teachers who were producing better students. The unions stood firm: The pay scale remained fixed, and performance could not affect it. Rhee devised a rather brilliant plan and offered it to the teachers. They could (a) accept the current wages, which are capped in the mid-50s, or (b) vote for a plan in which teachers with better performance would earn as much as twice that much. Money itself, you see, is not the issue. Rhee's plan was hailed as a masterstroke. How did the District's teachers vote? The American Federation of Teachers refused to put the plan to a vote.

[Miss Rhee is now in the headlines because of allegations about her fiancee, which have absolutely nothing to do with her ideas for reform. Test scores in D.C. have responded positively to changes she's made.]

Decades of research and test data indicate that the primary factor determining a school performance is not its budget, physical plant, curriculum, student population or the income level of its district. It is teaching. The most powerful opponents to better teaching are the teachers' unions. I am a lifelong supporter of unions. But "Waiting for Superman" makes this an inescapable conclusion. A union that protects incompetent and even dangerous teachers is an obscenity. 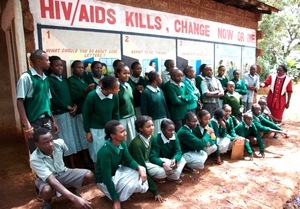 What about the teaching in Kenya? Teachers are by definition an elite, having somehow fought through the system and emerged as college graduates. The schools we see are not physically impressive; the one focused on in the film is a very basic brick structure with no amenities and crowded classrooms with simple board benches and desks. A gym? Don't make me laugh.

Education focuses on reading (in English) and math, with some history and geography. The students are impressed by their ability to be in school at all. Their parents sacrifice to send them; child labor could add to the family income. At the end of primary school, they take tests to qualify for secondary education if they can afford it. The film shows some of the test questions. To me, they look difficult for kids their age. Our schools push students through the system who are functionally illiterate.

The fact is that the next African or Indian taxi driver you meet has quite possibly benefited from a better education than the average American high school graduate. A great many of them, who had the enterprise and determination to immigrate here, are college graduates. I have noticed during two years of taking cabs that an African or Indian taxi driver will invariably have the radio tuned to NPR. Now I understand why. Let's face it. NPR is the only radio source in America that intelligently considers national and world issues in depth.

Trailer for "A Small Act"

Davis Guggenheim of "Waiting for Superman"

The films both tell extraordinary stories. "A Simple Act" show Chris Mburu seeking the name of the anonymous Swedish woman who "made my life possible." She is Hilde Back. Chris in gratitude started a foundation named the Hilde Back Foundation, to fund scholarships for poor village children. He had never met her. She is now 85 years old, a German Jew who was sent to Sweden as a child. Her family died in the Holocaust. She never married, has lived in the same apartment for 35 years, was a school-teacher.

She is flown to Kenya, serenaded by the choir from Mburu's village, feasted, thanked, gowned in traditional robes. She says that her $15 was an insignificant sum to her, but she kept it up because she thought even a small act was worth performing. After the screening of "A Small Act" at Sundance, in the most extraordinary surprise I've seen here, the film's director, Jennifer Arnold, introduced Chris Mburu and Hilde Back. She is a tiny woman, but robust and filled with energy.

She was asked if, since she never had children, she thought of Chris as a son. We see in the film that they stay in close touch. "But I have had children," she replied. "I was a teacher. I had many, many children." She was the kind of teacher who makes a difference, not the warden in a Classroom of Death. 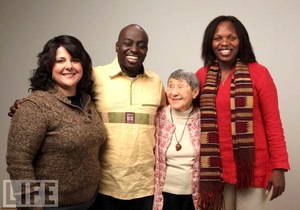 Appearing with Arnold, Back and Mburu was his younger cousin, Jane Muigai. She plays a major role in the film. Chris jokes that she has been following him all his life: "I went to high school. She went to high school. I attended the University of Nairobi. She attended the University of Nairobi. I graduated from Harvard Law School. She graduated from Harvard Law School. I went to work with the United Nations. She went to work for the United Nations."

Looking at these two confident professionals, we rememb the village they grew up in, and the mud house of Chris's family. In the film, we follow three Kenyan students who hope to win high scores and continue in school. One says she would miss her family at a boarding school, but would enjoy being able to study by electric light. In this village the students study by the light of a single oil flame. 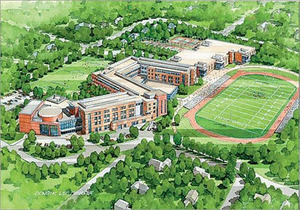 Contrast that, as "Waiting for Superman" does, with the schools in wealthy suburbs that have pools, tennis courts, physical education facilities, extensive sports programs, closed-circuit TV stations, parking for student cars, and so on. The statistics find no relationship between such luxurious schools and test scores. A sprawling Los Angeles high school campus is contrasted with a charter school in an industrial area where more than 90 percent of the student are accepted to colleges. The same is true of Chicago's Providence St. Mel's, drawing its students the very poorest part of Chicago's West Side.

Both of these docs will be opening, and I will review them separately. Just let me draw a few depressing conclusions.

"Waiting for Superman" makes a compelling case for the apparent fact that American students from all ethnic and income groups are not receiving competitive educations. Yes, I know there are good schools and heroic teachers. But look at the statistics. I know little about math, but I learned enough to win a state scholarship. About reading and writing I know more, and it's my observation that today's high school graduates are badly served. The studies isolate a primary reason for that: Bad teaching, in systems that protect bad teachers and therefore discourage good ones. 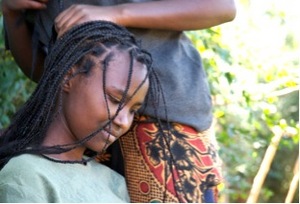 Some time ago I caught a lot of flak for suggesting that if you think "Transformers 2" is one of the best films of all time, you are "not sufficiently evolved." I have no quarrel with anyone who likes the film. But if you think it's a great film, you have not been prepared to evaluate and compare works of art, and to examine your own opinions.

I know some of my old classmates hang round here from time to time, and I dare to make this statement: An eighth grade graduate of the St. Mary's Grade School of my youth knew more than a typical high school student does today. A typical graduate of the Urbana High School of my youth knew more than some college graduates do today. Anyone who grades essays at the college level today observes that many of their students are semi-literate.

The fact is, American education is failing. Even in a bad economy there are good jobs in Silicon Valley. Bill Gates says it's not so much that he wants to recruit foreign workers as that he has to. The fault can be largely laid at the feet of bad teachers and their unions. That's a conclusion I suspect good teachers would be the first to agree with.