In those years we lived close to the ground. My earliest memory is lying flat on my stomach on our front sidewalk, my nose inches from a procession of ants. When you are short and a child, the earth is close and the world of adults towers above. You'd like to climb to the top shelf where you think the Oreos might be, but a more reliable entertainment is to use a sheet to make a cave out of a side table. I listened to the Lone Ranger while hiding under my bed, where I felt safe.

In my grandmother's back yard, I spent long periods frozen in immobility, a salt shaker clutched in my hand. My Uncle Bob had treacherously told me that if I could shake salt on the tail of a Robin Redbreast, I could catch it. This kept me out of his hair. There were robins everywhere, hopping on the grass, cocking their heads to the side, listening for the slithering sound that might betray a worm. I haven't seen a robin in a long time. I suppose there must be about as many around today, but my life isn't calibrated to see them.

One day I saw a garden snake in my grandmother's yard. It was about a foot long and its skin glistened with an iridescence that changed colors as it darted past. A snake is A narrow fellow in the grass, Emily Dickinson wrote, adding that she never met this fellow, Attended or alone, Without a tighter breathing, And zero at the bone.

That was how I felt. I knew in theory about snakes, but this was the first one I saw, following the arrow of its mission. There was something chilling and alien about it.

On your knees or your stomach, the world revealed a hidden population. One day at Dougie Pierre's house, we climbed under the bridge over the Boneyard Creek to catch crawdaddies. We did catch a couple, using a kitchen sieve, and kept them in a Mason jar full of water, where I suppose they must still be. I had waded in the Boney a dozen times and never seen a crawdaddy. After I saw them, I waded no more. They're always up to something.

During the war my father filled the vacant lot behind our house with tomato plants. This was our Victory Garden, and my contribution to the war effort was to crawl on my knees looking for tomato worms, which I would pluck off a stem and keep in a brown paper bag. Their color matched the plants, and if you wanted to find one all you had to do was stare at the stem of a tomato plant long enough and, three or four times out of ten, some silent optical shift would take place and you would realize you were looking at a tomato worm.

My father also dispatched me up a stepladder to pluck bagworms from the evergreens in our back yard. These worms, which would eventually turn into--moths? butterflies?--hung from the branches in cocoons they made from the spikes of the evergreen trees. The spikes grew dry and sharp while being used in this way, which made them undigestible for birds that came looking for lunch.

My father would take the paper bags of worms and soak them with kerosene. Then we would set them alight, and stand contemplating the flames. It never occurred to me that they had feelings. You can't expect to eat our tomatoes and evergreens and get away with it.

I also spent hours on a futile mission to rid our lawn of dandelions. It did no good to simply pull them up; you had to use a tool to sever their deep roots. We kids thought dandelions were just fine the way they were. We rubbed them on each other's noses a nd chins to make them yellow. We braided them into chains. We took the long stems and squeezed them from one end to the other, expelling the dandelion milk, We presented them as bouquets to our mothers, who received them with muted enthusiasm.

At the other end of our block lived a magical boy named Joe Sanderson. His father Milton was a professor at the University, with a speciality in insects. His mother Virginia was unusual among mothers in that she had no objection to Joe populating his bedroom with hamsters, rabbits, salamanders, parakeets, snakes, aquariums for fish and terrariums for turtles. Joe's older brother Steve owned a MG-TD, the coolest sports car, which he completely disassembled, lightly coating the parts with oil while explaining that some day the car would be worth a fortune.

In the Sanderson's back yard, Joe and I found little frogs after a rain, and held them in our hands while they regarded us in terror. Very rarely we might find a lizard. One day we crawled under a thick hedge and he shared his discovery: A web with a Black Widow spider waiting at its center. He showed me the red spot that identified it. "Don't let her bite you," he said, "or you'll die." I believed him. He knew things like that.

Another day when I walked into his back yard Joe was sitting crossed-legged looking at a plant. "What do you see?" he asked me. I saw the plant. "Is that all you see?" It was. He took a yellow pencil from behind his ear and very slowly used its point to outline for me the shape of a Praying Mantis. And there it was. Joe said nothing. He looked solemnly at me and nodded.

Joe's parents moved to a house in a subdivision south of town. I went to college at Illinois. Joe chose a college in Indiana. My mother and I would go over to the Sandersons for dinner, but Joe usually wouldn't be there. We fell out of touch. Such things happen. I moved to Chicago. My mother and Virginia remained friends, and from time to time I'd get reports that Joe had moved to South America and was involved in something he couldn't talk about. On his trips home, his mother would sew tightly-rolled $100 bills into the seams of his blue jeans.

In 1982, my mother learned from Virginia that Joe had been killed while fighting for rebel forces against the military junta in El Salvador. He was not yet 40. In my imagination, he looks solemnly at me, and nods. 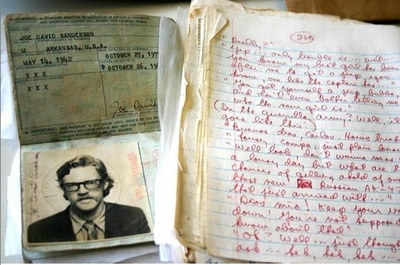 A Los Angeles Times article about the life and death of a wanderer.