It is hard to reconstruct these fragments from the memories of childhood but as nearly as I can remember, the Zorro craze came after the Davy Crockett craze and before Elvis. Kids made Z marks everywhere -- on walls, fences, blackboards, and with ballpoints on the shirts of the kids sitting in front of them -- and my personal notion is that Datsun sells half of their Z-cars to guys harboring sublimated Zorro fantasies.

Here's the curious thing. I remember a lot about Zorro. I even remember that he was once played by Clayton Moore, who got to keep wearing his Lone Ranger mask. But I cannot remember if the Zorro movies were ever supposed to be funny. I assume that the Zorros, played by Douglas Fairbanks, Tyrone Power, and John Carroll, were more or less serious, within the broad outlines of the adventure genre. But what about all the Zorro movies and TV shows that Guy Williams made for Disney? Were we laughing at him, or with him?

I ask because I am just as confused after seeing "Zorro, the Gay Blade," which stars George Hamilton in a dual role as Don Diego Vega and his twin brother, Bunny. (The brother was originally a Vega, too, but after enlisting in the British Navy he changed his name to Bunny Wigglesworth.) This movie is, of course, intended as a comedy, and it has some funny moments. But it's just not successful, and I think the reason is that Hamilton never for a second plays Zorro as if he were really playing Zorro. We could laugh at the previous movie Zorros because they were so serious about their ridiculous codes and vows and pledges of loyalty and chivalric passions. They were funny as long as they played it straight. But when a movie sets out a create a funny Zorro, that's bringing coals to Newcastle. By playing every scene for laughs, Hamilton has nothing to play against.

"Zorro, the Gay Blade" was no doubt inspired by the enormous success of Hamilton's spoof of a durable Hollywood character, when he played Dracula in "Love at First Bite" (1979). Hamilton demonstrated in that movie, and demonstrates again in this one, that he is a gifted comic actor. He can have fun with his improbably handsome appearance, he can poke fun at his character's vanity, and he can look convincing enough as Zorro (or Dracula) to remind us of the quintessential Hollywood leading men whose footsteps he is stalking.

But ... should Zorro be funny because of his puffed-up self-importance, or because his role in life is inescapably ridiculous any way you look at it? Should he be funny because of what he is (my theory), or what he does (this movie's theory)? A funnier comedy might have been made out of a more genuinely satirical examination of the Zorro character. Instead, this one provides Zorro with a gay brother who's a screamingly limp-wristed stereotype, and then goes for jokes that are disappointingly predictable. It also gives him a leading lady (Lauren Hutton) who has all she can do to play her role at all, much less play it satirically. And it never provides a comprehensive story to hold the jokes together. Too bad. I think I remember now: We laughed more at the old Zorros, because they didn't know they were funny. 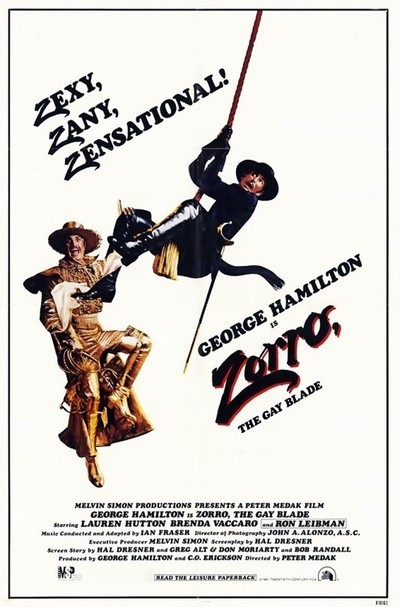