The new French voodoo/gothic drama “Zombi Child” is mostly satisfying, but also a little frustrating because of its creators’ walking-on-shells sensitivity. Written and directed by Bertrand Bonello (“Nocturama,” “House of Tolerance”), “Zombi Child” definitely feels like the kind of movie whose creators might defend its existence by noting that “the film is thoroughly and precisely documented” (as Bonello does in the movie’s press notes). After all, “Zombi Child” is a multi-generational cautionary tale that’s focused on Haitian voodoo and the way that its seen with a mix of fascination and skepticism by a new generation of young Frenchwomen, including Mélissa (Wislanda Louimat), a Haitian schoolgirl whose family’s ties to voodoo culture are somewhat explained throughout the movie, but never fully demystified.

Much of “Zombi Child” isn’t even directly about Mélissa or her heritage; instead, Bonello usually treats her as the subject of unsettling fascination for Fanny (Louise Labéque), a lovesick and very fair teenager who’s also obsessed with the memory of her boyfriend Pablo (Sayyid El Alami). In that sense, the slow, semi-naturalistic process by which we learn about Fanny’s intentions—she wants to use voodoo to get closer to Pablo—says a lot about “Zombi Child.” It’s a horror-drama that draws inspiration from earlier genre touchstones like “White Zombie,” “I Walked With a Zombie,” and “The Serpent and The Rainbow.” It’s also very much about its creators’ self-conscious outsider’s view of the eerie beauty and material reality of voodoo, which is itself still an outsider culture in France and beyond.

Plot isn’t really the thing in “Zombi Child,” since the movie is explicitly about a disjointed “subterranean history” of events, as Fanny and Mélissa’s 19th century history teacher (Patrick Boucheron) explains during an introductory lecture. In this monologue, we’re told that the concept of history as a progress narrative is suspect given how exclusive that organizing principle is. Are stories or events that don’t fit these narratives any less authentic? “Zombi Child” is, in some ways, an attempt to answer that question with a counter-narrative about an unidentified Haitian man (Mackenson Bijou) who, in 1962, was buried alive by white colonists, and brought back to life as an undead zombi slave. This man’s connection with Mélissa is unclear for a while, but there is obviously something between them, just as there’s an undefined, but powerful kind of attraction between Fanny and Mélissa. Fanny wants something from Mélissa given her association with voodoo, like when Mélissa recites René Depestre’s Cap’tain Zombi poem during an initiation ceremony for Fanny’s literary sorority. But it’s hard to tell how these two narrative threads are related until later on in the movie.

Thankfully, following Bonello’s disjointed story is never boring thanks to his and his collaborator’s knack for dramatizing the romantic, but callow aspects of Fanny and Mélissa’s angsty teenage lives. “Zombi Child” is obviously not a run-of-the-mill teen drama, but it’s still satisfying for the mix of empathy, fascination, and mild critical distance that Bonello uses to depict Fanny and Mélissa’s otherwise inaccessible world of sisterly bonding and schoolyard daydreaming. Many scenes in “Zombi Child” end without much dramatic fanfare; some scenes end right after some narratively inconsequential detail is used to paint a fuller picture of Fanny and Mélissa’s boarding school-life. So while Fanny’s online keyword-searches for information on “voodoo possession” and priestess-like “mambos” may not be typical, but they are presented in a refreshingly matter-of-fact way.

Bonello often resists the temptation to criticize his young protagonists’ too harshly. He lets their contradictory and sometimes fickle behavior speak for them, as when Fanny’s friends (all white) try to decide if Mélissa is “cool” or “weird” before they wonder aloud if a boy is genuinely attractive or only “fake sexy.” Soon after that, they all sing a French rap song with lyrics like "I hate cops ‘cause cops hate what we are,” "only my crew knows who I am,” and "this ain't love, I just want your ass.” Bonello’s young heroines are, in that sense, allowed to be young without being condemned too harshly for it.

Then again, Bonello’s general preference for keeping several key plot points ambiguous is ultimately what makes “Zombi Child” a good, but not great story about counter-culture, as it’s experienced by members of a dominant culture. As involving and genuinely exciting as much of Bonello’s frank teen drama may be, it only says so much about who gets to write history, and what their motives are. I like “Zombi Child” for its frank, seductive depiction of clashing cultures, as well as the care and reverence that Bonello brings to the direction and lighting of his movie’s Haiti-set scenes. I just wish there was more to the movie than what’s presented on-screen. 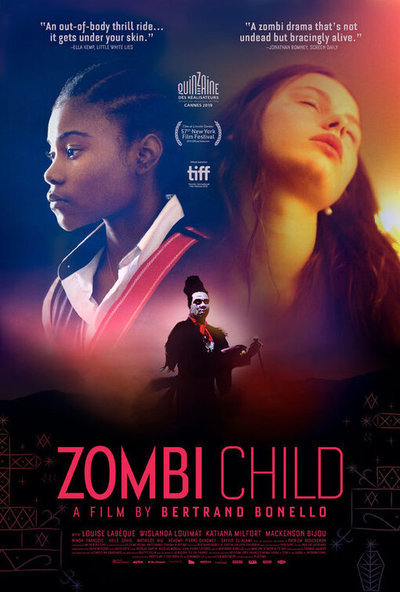