The late aughts have been a particularly fecund period for the American maverick director Abel Ferrara. From 2019 to now he’s cooked up three fiction features and two documentaries (one about him presenting one of the fictional features, “Siberia,” in Berlin).

It hasn’t been entirely a matter of him having a lot to say. Frankly, while it wouldn’t be fair to state that the three fiction features, “Tommaso,” “Siberia,” and “Zeros and Ones” all say the same thing, it is, I think, accurate to call them variations on a theme. The theme being what exactly is going on in the heart and mind of Abel Ferrara.

“Tommaso” was a half-pastoral, half-tormented portrait of a sober American artist living in Italy, which is what Ferrara himself is. “Siberia” was a deep dive into isolation and nightmares—the title location is a bar run by the lead character. Played, as the title character in “Tommaso” was, by Willem Dafoe.

“Zeros and Ones” returns to Italy. Indeed, its narrative hinges on one of the most famous and sacrosanct places there. This movie, too, features a man in emotional isolation, played now by Ethan Hawke instead of Dafoe. In a sense, this is Ferrara’s pandemic quarantine movie. His “response” is not like any you’ve seen before.

It begins with a preface by Hawke as himself, talking about the picture you’re about to see. It’s an awkward, earnest, weird pitch (as we’ll learn at the end of the movie, when Hawke addresses us again, that it actually was a pitch, for crowd-funding). But it’s the most grounded the movie is going to be in a while.

Shot digitally by Sean Price Williams as if he was in a competition called “How Little Light Do YOU Need To Get An Exposure,” “Zeros and Ones” spends a good chunk of time following Hawke’s character, a military man named JJ who’s stationed in Italy, as he wanders about, doing things that guys in Abel Ferrara movies tend to do. That is, being dwarfed in expansive surroundings (a deserted train station), visiting and having an enigmatic conversation with a woman, having a less enigmatic conversation with a child, going to a seedy locale and procuring narcotics there, and so on. He also has fraught digital exchanges with indie film person Stephen Gurewitz—playing himself I guess because there’s his name above his head on the laptop screen—and records some ostensibly documentary video. “Shoot it so they believe it,” a superior officer tells him. At some point an Italian woman asks him what he’s doing “in my country.”

Before we are able to piece all this together, we hear pronouncements like “Jesus was just another soldier, another war casualty,” and then the question “But on whose side?” We also learn that JJ has a twin brother who’s being detained and tortured back in the USA. In connection with a supposed terrorist plot. Playing the brother, Hawke channels Dafoe at his most crazed, and yells things like “You can’t kill me,” “This machine kills fascists,” and “How come no one is lighting themselves on fire anymore?”

And we haven’t even gotten to the bombing of the Vatican yet. (Is that a spoiler?) As described, all of this seems rather on-the-nose—dumb even. The twin-brother bit is a really hoary way of signaling duality, and the philosophical would-be adages bandied about make Dostoevsky seem as dry as William F. Buckley.

But Ferrara’s filmmaking always has a blunt elemental force and conviction. It doesn’t quite transcend the commonplace aspect of what he’s trying to “say.” And yet transcending isn’t the point—doing is. This is not just guerrilla filmmaking, it’s a kind of action painting. A literal journey to the end of the night. 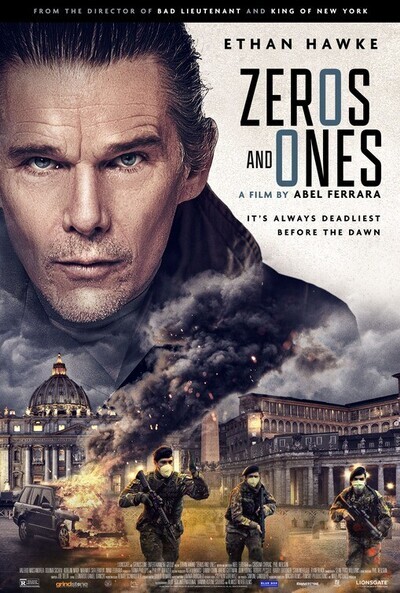