In the opening shot of this film, the first work in nine years from the intrepid director Lucrecia Martel, the title character, Don Diego de Zama, stands on a beach, striking, on the sand at low tide, what we can infer he considers a heroic pose. There’s nothing much actually going on; some small craft are at the beach, and nearby, there are native women participating in a casual language class.

Zama’s pose makes a provisionally handsome picture, but the movie doesn’t wait long to puncture its protagonist’s pretension. Coming upon a group of what he considers “Indian” women who are conversing while naked and covered in mud, he lies in some grass where he believes he can see and not be seen. Before he can get up to whatever he’s thinking of getting up to, he is indeed seen, and chased away by one of the women, who taunts him as a voyeur. The scene ends on a slapstick note.

As in the fabulous 1956 Antonio de Benedetto novel from which the film is adapted, Zama is here an absurdist figure. The film draws out the dryly comedic aspect of his ridiculousness. Daniel Giménez Cacho, in the title role, often portrays the bureaucrat with mouth slightly agape, as if maybe he’s just starting to figure out that a cosmic joke is being played on him.

Make that multiple jokes. While he was born in South America, Don Diego is nevertheless a colonizer from Spain, a functionary in its government stationed far from his wife and children. The governor to whom he’s asked for a letter of transfer, so he may reunite with his family, sets arbitrary conditions before he’ll even consider writing to the king to get the process started. Zama’s supposed assistant seems to constantly best him both socially and professionally. The noblewoman he lusts after alternately lures and dismisses him. In the middle of the movie or thereabouts we learn he has an illegitimate child with one of the native women; this, too, has only added to his underground status as a figure of fun. The way the movie elliptically places the character in a variety of dead ends brings to mind the classic Polish film “The Saragossa Manuscript.” The individual narratives are nested within each other, but there’s no organizing Ur-text; Zama is constantly adrift.

Ms. Martel’s attention to period detail is impeccable without being show-offish about it. But “Zama” is not the kind of period piece that aims for suspension of disbelief. Its signals its modernity in a variety of ways, particularly on the soundtrack. At moments of particular stress for its protagonist, electronic tones not unlike feedback intrude on the soundtrack. The music, jaunty guitar-led instrumentals that sometimes sound like proto-surf music, is vintage stuff by Los Indios Tabajaros, a Brazilian guitar duo that began recording in the 1940s.

Eventually, after concluding that he’ll never get his transfer—never get off the island, so to speak—Zama takes action, and joins a posse dedicated to tracking down a legendary villain, a thief and raider who’s become the scapegoat for every ill suffered by the colonizers (at least such ills as they can’t blame on the natives). Here the movie shifts into a genuinely surreal direction, as Zama descends from a purgatory of Beckett/Kafka dimensions into an inferno of humiliation and disfigurement that ultimately reveals itself amidst mirror images and reversed identities. It’s here that Ms. Martel’s precise but still magical cinematic style makes itself most profoundly felt. “Zama” is a mordantly funny and relentlessly modernist critique of colonialism that makes no conclusions, ultimately resting on a scene of verdant nature not entirely stained by humanity. 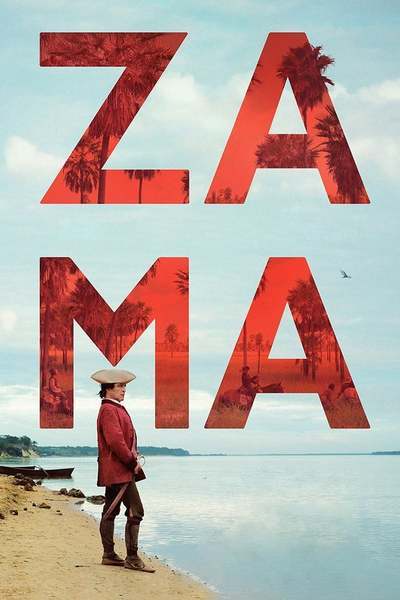