A zombie movie set in a plastic surgery hospital practically writes itself, and that's supposed to be the charm of "Yummy." What's it about? Just check the poster tagline—"facelifts, boob jobs, and zombies." But any degree of sleaze requires a little wit, and "Yummy" has none. As it struggles to be even mildly significant in the sprawling history of zombie stories, it eventually leaves viewers with a movie that's just plainly ugly.

The script, from director Lars Damoiseaux and Eveline Hagenbeek, certainly involves topless zombies, an enlarged penis meeting an over-the-top doom, and plenty of bodies getting ripped to shreds. But “Yummy” has very little to say ever about how people want to change their bodies aside from pointing out that it's a thing, while the other half of its very small brain still wants to leer anyway. It can't offer any wit to its tiresome cynicism and horniness, and all of its body parts, zombies, and forgettable characters are treated as wholesale.

Example: We meet Alison (Maaike Neuville), the lead heroine of a story that barely gives anyone a personality, as she’s being ogled by a bunch of dopey men outside her car window. She’s on a trip to get a breast reduction at a shady plastic surgery hospital in Eastern Europe, with her husband Michael (Bart Hollanders) driving while her mother thinks the surgery is a bad idea (because the mother is getting some upkeep done herself). The hospital gives Alison and Michael some bad vibes, in part because they don't seem to follow standard procedure, and the doctors are sleazy. None of these details are particularly funny so much as lazily provided (like the doctor who is far too grabby with Alison), and the snark about the business overall completely dies in the air.

When Michael is taking a tour around with the predatory, skin-crawling hospital assistant Daniel (Benjamin Ramon), he discovers a woman who has been tied up, but with a mask on her face. Michael takes it off and boom—a zombie face, most of its mouth gone. The zombie breaks free, and Michael scurries to get Alison out of the surgery. Before long, the hospital has become a death trap with zombies that all sound like they're trying to clear their throats, and the couple link up with other people in the building hoping to get out alive.

Once “Yummy” kicks off its apocalypse by introducing this patient zero, that’s when things start to get really bad. As it mounts chaos, a lighting style that’s meant to be dynamic instead becomes monotonous: some parts of a room have a tinge of orange, or some have blue. The pacing takes on the same plain quality, as sometimes they scurry through a chase sequence, sometimes they have bare dialogue that slightly gives them more slightly personality than the zombies. The two-note guitar riff that chugs along during any action scenes starts to feel like an inside joke.

The zombies, however much blood they're covered in, are just one of the movie's generic traits. Though "Yummy" has some intestines-yanking and limb-chewing, it's too easily to imagine that these zombies could have walked off the set of any other zed-flick. “Yummy” is then so haphazard with setting up zombie moments for its make-up team to shine that even gratuitous amusement eludes it.

Despite its setting having great potential for comedy, the movie still has a rotten sense of humor that it mistakes for being dark and biting. Just like its few obvious scare moments (like inserted security camera footage), "Yummy" is far too lazy in setting up its gross-out gags, like the way it builds to a guy’s penis being lit on fire. The movie's sense of comedic rhythm is nearly nonexistent, and the best that the story can do is splatter stuff on its characters. Even then, with Michael’s sole characteristic being his gag reflex to seeing blood, you know what’s going to happen if he sees too much.

Fitting to how comedy often just goes mean when it doesn’t have any new ideas, “Yummy” mistakes its shocking sense of humor for virtually hating its characters. That’s especially the case with how it treats women, as in a scene where one woman's lazily executed death scene is punctuated with a shot looking up at her legs from behind. It's not clever, it's just pathetic. And then there's the ending, which shoehorns a rape attempt for good measure, and then does away with the one idea that gives the story a heartbeat, just for the sake of proving that it can do whatever it wants to these characters. There’s no sense in this finale that "Yummy" is trying to say something about rotten luck. It’s more a confirmation that "Yummy" is clueless on how to make horror even slightly fun, or funny. 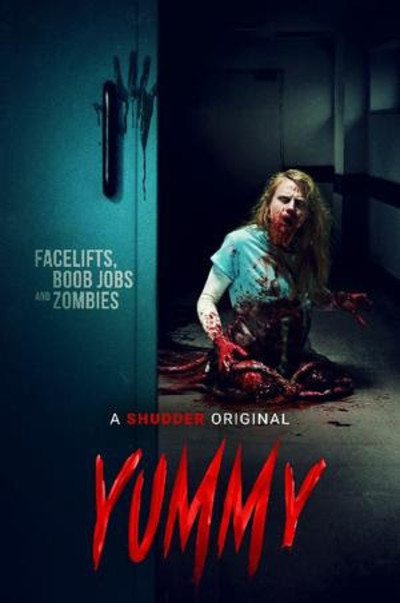