I don’t want to come off like some kind of inverse snob, but I’ve got to say, given the circumstances of his birth and upbringing, writer-director Jake Paltrow strikes me as the Least Qualified Person To Envision A Dystopian Sci-Fi Future Ever. You may infer the circumstances of Paltrow’s birth and upbringing by his name, I reckon. In any event, qualifications notwithstanding, he has nevertheless opted to imagine and film such a story, one that bears out my hunch.

“Young Ones” (there really isn’t anything in the movie that makes this bland title pop) takes place in an unnamed portion of the Western United States at a time when water is very scarce, and chronicles a sort of land-war-by-subterfuge in which the main players are Michael Shannon’s haunted patriarch, Nicholas Hoult’s ambitious young-man-on-the-make (for several items, including Elle Fanning’s character, Shannon’s daughter) and Kodi Smit-McPhee’s observant, sensitive son-of-Shannon. In Paltrow’s future, water is a commodity not unlike oil. But the former farmers of the now-desert in which Shannon roams, first with a live donkey, then with a robot replacement, are not nearly as stressed as ordinary mortals in danger of imminent dehydration might be in the real world. Indeed, Paltrow’s near-dystopia (there is still a central government and a semblance of civilization, including used-car dealerships, in this world) is one of the most decorous you’ll ever see. Even the most thirsty and desperate look pretty good most of the time. And the color coordination! At one point, Aimee Mullins, playing a mom with a new robotic spinal cord, tunes into a video-streaming funeral, at which the attendees are all dressed in blue-grey clothes, the better to blend in with the blue-grey rock formation behind them. Seriously, this movie makes “The Road Warrior” look like “The Road Warrior.”

Paltrow, whose previous directorial feature was the somewhat more apt 2007 showbiz romcom “The Good Night,” is an attentive student of cinema, as his mini-homages to the likes of Antonioni and Lucas in this story testify. But his story is a veritable nothingburger, here and there recalling notes from the likes of “Giant” and “There Will Be Blood,” but never really connecting on levels emotional or intellectual. One would like to say the cast does its level best, but, to be brutally honest, the footage assembled doesn’t depict them doing a whole lot more than squinting, and looking lanky in clothes that, again, aren’t inordinately suitable for desert living, unless it’s GQ’s idea of desert living. Viewers who make it to the end will be confused or infuriated but likely not delighted by the faux-Wes-Anderson curtain-call end credits. Too bland to qualify as a really notable disaster, “Young Ones” finds young Paltrow still trying to find his voice. If he intends to continue on this career path, he’d best accelerate a bit, as he’s almost 40. 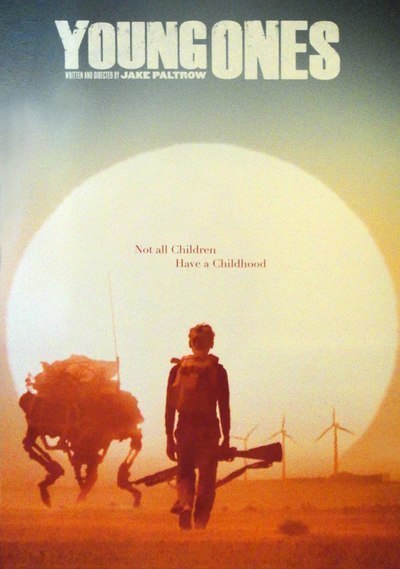 Rated R some violence and language