You Won't Be Alone

Beware of any movie that begins with the mean image of a slithering cat trailing on snaky grounds seen from its perspective. Such is the start of “You Won’t Be Alone,” experimental writer/director Goran Stolevski’s daring folktale-horror, which, in its most cutting moments, freely disembowels oblique questions around identity.

Like most things in Stolevski’s shocking and gradually deepening debut, that above-mentioned cat isn’t quite what it seems. It is in fact a mythical witch called Old Maid Maria (Anamaria Marinca of “4 Months, 3 Weeks and 2 Days,” completely unrecognizable), approaching a mountainous village in the 19th century Macedonia to pursue a newborn for an unknown reason. How very The Brothers Grimm at first glance, brought to life with a Robert Eggers-adjacent touch, plenty of blood and guts, and Matthew Chuang’s dewy, cold-to-the-touch cinematography.

The mother of the baby in question is obviously unaware of this Grimm-like world she’s asked to dwell in, as well as the simple fact that a cruel witch with a plan can’t be negotiated with. So when the frightening and shape-shifting Old Maid Maria—also known as the Wolf-Eateress—demands the woman’s innocent infant, the desperate villager can’t do better than barking back with a pointless deal: Why not let her raise the girl until she turns 16 and then claim her as her own? With nightmarishly black and pointy nails, a handful of thin white hair strands, and an Elm Street-embossed face—burned, brain-like, and sure to scare off any mortal suffering from trypophobia—the witch surprisingly agrees. But then the mother furthers her futile plan, hiding her daughter in a deep ditch somewhere, supposedly away from the dangers of the world (and the witch), only to lose her to Maria in due course after the film’s deeply engaging prologue.

“You Won’t Be Alone” then moves along on hazier grounds, once the kidnapped young girl also gets transformed into a shape-shifting witch in the hands (or rather, through the magical spit) of the Old Maid. In that regard, Stolevski’s tale demands both the utmost attention and no-questions-asked surrender of the audience as the feral character Nevena (Sara Klimoska) feels her way through the world, armed with no human words but equipped with something more powerful: her transformative gifts. Indeed, watching the curious woman assume the shape and image of any creature or human she pleases (and of any gender, it should be noted) and discover the wonders and dangers of her sphere for the first time proves to be a rewarding experience for the audience, even when the returns feel unevenly fluctuating, sometimes necessitating a re-watch to connect all the dots of the story. In this process, Nevana witnesses the deeply rooted perils of toxic masculinity through Noomi Rapace’s vulnerable mother Bosilka. Through Carlota Cotta’s Boris, she flourishes sexually and allows eroticism to wash over her in the most jaw-dropping sex scene since the one in Ali Abbasi’s “Border.” And thanks to Alice Englert’s Biliana, she accepts a fate as a human being, after tasting the kind of childhood that was mercilessly stolen from her.

The most enthralling, even revolutionary aspect of “You Won’t Be Alone” is its engagement with the notions of self and character in a way that defies binary definitions of gender. The film refreshingly operates outside of any cisgender rules, establishing its own language, identity, and universe on the one hand, and dismantling them on the other to unearth new avenues of compassion and understanding. Truth be told, Stolevski can’t always sustain the viewer’s patience, often biting off more substance than his film can chew and digest. And his empathetic attempts to redefine our understanding of a witch feels somewhat simplistic in the aftermath, offering only marginally more philosophical depth than a Disney origin story meant to humanize its villains. Still, “You Won’t Be Alone” announces the arrival of a fierce new genre talent, an inventive stylist and an unapologetic interrogator of mankind with something worthwhile to say. 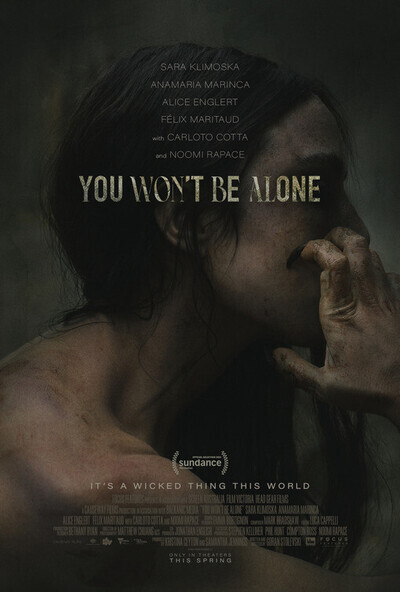