You Should Have Left

There should be reasons to celebrate “You Should Have Left.” Not only does it mark the underrated Kevin Bacon’s first film role since 2016, but it reunites him with director David Koepp, who helmed the star’s “Stir of Echoes.” And Koepp may still be licking his wounds from the critical drubbing that greeted his last film “Mortdecai,” but he has delivered some genre thrills before in directorial efforts like “The Trigger Effect” and “Premium Rush.” When Blumhouse and Universal announced just last week that “You Should Have Left,” once intended for a theatrical release, would drop on VOD, genre fans definitely perked up their ears. That excitement will slowly dissipate over this genre film’s 93-minute runtime. Kevin Bacon and David Koepp may not work enough, but they should both be working on better projects than this one.

Working from a novella by Daniel Kehlmann (although a cursory look at that source's plot online reveals some pretty major changes), "You Should Have Left" stars Bacon as a screenwriter named Theo Conroy, who has become more famous due to the headline-grabbing death of his wife. She took a few too many pills and drowned in a bathtub, leading to a high-profile trial against Theo, accused of contributing to her death. Theo has always professed his innocence, but as his new wife Susanna (Amanda Seyfried) says to her daughter Ella (Avery Tiiu Essex), sometimes people just believe the accusations. Susanna is an actress and what could politely be called a non-character. In her first major scene, Theo goes to the set and hears her filming a sex scene. On the way home, they pull over so Susanna can have real sex with her husband to affirm his manhood. There’s a commentary here about an older man and a younger woman whom he sees purely as object of his ego, but the film doesn’t do enough to unpack it. Instead, it lingers in the air like a bad smell, and is used her for a jealousy subplot so Theo can be distracted by wondering if she's cheating on him.

Theo, Susanna, and Ella need to get away from it all, and so they rent a secluded home in Wales. While that description may conjure images of pastures and sheep, the house actually looks like something far more Los Angeles with sleek lines, cold lighting, and blank walls. And it, well, doesn’t fit together. From the minute the trio gets there, they comment on how it seems so much bigger on the inside than it looks from the outside. Before he can wonder if his daughter has The Shining, Theo is drawn into a house that’s basically playing games with him. Doors open to staircases that can’t possibly be there; lights go on and off on their own; and someone wrote “Leave You Should Leave Go Now” in Theo’s notebook. Of course, he should follow those instructions. Of course, he doesn’t.

“You Should Have Left” keeps with Blumhouse’s concept of low budget and possibly high reward in that there’s a very limited cast and only one major setting, but that structure doesn't cover up the mistakes. Sadly, Koepp can’t give the house the personality of the Overlook or even the residences from Blumhouse hits like “Sinister” or “Paranormal Activity.” The idea that a house could play with space and time is a creative one, but Koepp is too literal a filmmaker to send “You Should Have Left” down the surreal hallways it needs to travel in order to work. This is the kind of boring film that demands ADR in which Bacon says “This is definitely not happening” to convey a sense of urgency that’s just not being conveyed through the filmmaking. Everything here feels timid and toothless, lacking in true atmosphere or genuine scares.

Even Bacon seems lost, unable to sell the immediacy of the film’s more intense moments, which come way too late anyway. "You Should Have Left" might have worked as a tighter episode of an anthology series but doesn’t have nearly enough meat on its bones for a feature length. If it were playing in theaters, you might be tempted to leave, but you’ll probably be home already when you choose to turn it off. 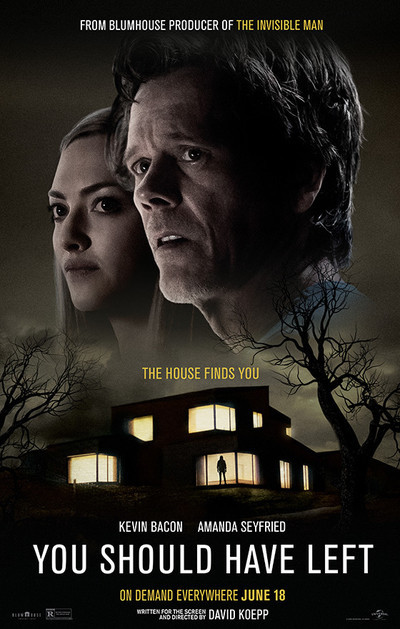