I know. Or, I should say, I'm a parent, so I "no." There is little as terrifying as being responsible for the continued survival of that little bundle in your arms, and as they learn to crawl and put things in their mouths and explore the world around them, sometimes it does seem that the world is conspiring to hurt them. And then there's middle school, and a whole different kind of potential for getting hurt. So it does seem like "no" is the only way to keep them safe.

That's the dilemma faced by Allison Torres (Jennifer Garner), who has three children pushing back against her forbidding, rejecting, declining, "nope on a rope," nearly reflexive use of the word "no." Allison is not happy about it either. She wonders how she got there. Once she was a person who "said yes to everything." She met Carlos (Edgar Ramírez) and "it was like finding a partner in yes ... Yes was like the theme of our relationship," as they went sky-diving and rock-climbing.

And then, children, and "No became the new yes. No is part of the job. No is the light. No is the answer." Allison is tired of saying no but feels she has to make up for Carlos, who is the "no" guy at work and wants to be the fun dad when he gets home. Also, she really wishes she could say no to having her children grow up and become less dependent on her.

When their children's teachers report that the kids feel smothered, even imprisoned by no, the school guidance counselor (Nat Faxon) suggests a "Yes Day," when the parents have to say yes to everything. There are limits: the day must be earned with chores and better grades, and all yeses must be contained in the day (no "can we get a dog?"), not dangerous or illegal, and within a reasonable budget and distance limit. The oldest Torres child is 14-year-old Katie (Jenna Ortega), and she ups the ante with a bet: if her mom says no to anything at all during the Yes Day, then she will get to go to a music festival that evening with her friends, no adult chaperone. If she loses the bet, Allison will go to the festival with her.

As parents say when they tell their children no, "it's all fun and games until someone gets hurt." And it is a lot of fun for a while as the Torres children take away their parents' screens, give their mom a makeover involving glitter and a tutu, and have an enormous "gut-buster" ice cream dish for breakfast.

Director Miguel Arteta and Garner, who also co-produced, worked together on the delightful "Alexander and the Terrible, Horrible, No Good, Very Bad Day," and this one does not match it in verve or heart, with less engaging characters and a less intricate plot. It relies too heavily on an "and then an even crazier thing happened" storyline, easy jokes like precocious comments (and twerking) from a child who can't even read yet, and bathroom and crotch-hit humor mixed with a lot of cartoon-style chaos. But it is an entertaining, family-friendly romp with wish-fulfilling yeses, extended comic mayhem, and satisfying consequences. And yes, there is learning and hugging. Garner is, as ever, a delight, and it's fun to see the yes come back into Allison's eyes, especially in a wild, no holds-barred game called Kablowey that combines Capture the Flag and Paintball, but with Kool-Aid-filled water balloons. Garner and Ramirez have an easy chemistry with each other and the three children that shows us how much they genuinely enjoy each other.

Like the bilingual Torres family, the supporting cast is refreshingly diverse and features top comic talent, including Faxon, Fortune Feimster as an ambulance driver, James Kyson as the ice cream store proprietor, and Arturo Castro as a friendly cop. If you believe that Allison would suddenly confide in a random stranger, or that two essential workers would abandon their jobs and a major recording artist would disrupt a concert to keep the Yes Day going, well, this movie may just inspire you to dream up a Yes Day for yourself. 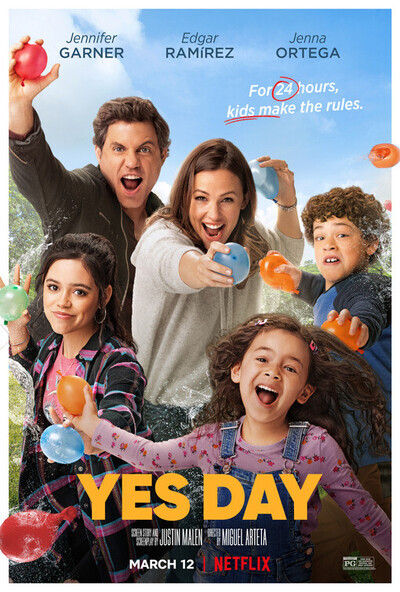 Rated PG for some rude and suggestive material, and brief language.