Alexander and the Terrible, Horrible, No Good, Very Bad Day

Judith Viorst's popular 1972 book "Alexander and the Terrible, Horrible, No Good, Very Bad Day," describing a day in the life of a 12-year-old boy with one bad thing happening after another, has been adapted into a popular musical, as well as a 1990 animated television special with a couple of songs attached to it. Now, Miguel Arteta (who directed "Youth in Revolt," along with a ton of television work), brings "Alexander" to the big screen in a zany expanded version of the book. The familiar elements are still there: the gum in Alexander's hair that opens the book; Alexander's love of everything Australian; the one-bad-thing-after-another storyline, from embarrassing pratfalls to bigger disappointments. But Arteta (and screenwriter Rob Lieber) have opened the scope of the book, making Alexander's bad day a virus that infects the entire family. "Alexander and the Terrible, Horrible, No Good, Very Bad Day" is humorous and poignant. There are a couple of scenes that fall flat, losing the manic push of the rest of the story, but the mood is so screwball that the film hurtles past its own mistakes. It's good fun.

Alexander (Ed Oxenbould) is about to turn 12. He is obsessed with Australia, and his bedroom is filled with didgeridoos and pictures of wombats. He has an older brother named Anthony (Dylan Minnette) and an older sister named Emily (Kerris Dorsey, so sweet as Brad Pitt's daughter in "Moneyball"), as well as a new baby sibling. Alexander's overworked parents are played by Steve Carell and Jennifer Garner. Mom is now the breadwinner since Dad lost his job. Dad spends his days going to Mommy and Me yoga classes with the baby and looking for work. Alexander, the third child in the lineup, is a bit lost in the family shuffle.

Alexander is having a very bad day. He woke up with gum in his hair. He fell flat on his face in front of his school crush. He was not assigned "Australia" in a school project about different countries. And it turns out that the most popular kid in school, Philip Parker (Lincoln Melcher), is having his birthday party on the same day as Alexander. Alexander can't compete with the wonders of Philip Parker's appeal: "Philip has a hot tub and ADD!" Alexander's family members are all so busy with their own lives that nobody pays any attention to Alexander's worries (or, at least, that is his perception). Mom's career is taking off; she's under a lot of stress. Dad has a job interview with a video game company. Anthony is dating the hottest girl in school and getting ready for his prom. Emily is starring as Peter Pan in the school play, and is obsessed with her role. Even the baby appears to be teething, and is in a constant state of tearful ear-splitting agony.

With a nod to "Liar Liar," Alexander makes a wish that his family could understand, just for one day, what it was like to have a really really bad day. He gets more than he bargained for.

The mayhem that ensues over the following 24-hour period is filmed at a breakneck pace by Arteta, flying from one catastrophe to the next, and it's all reminiscent of Robert Burns' famous line: "The best-laid schemes o' mice an' men / Gang aft agley." The Cooper family goes "aft agley" en masse. Alexander stands back, watching the mayhem with dismay. What has he done? All of the actors are totally game with the material, which includes broad slapstick and moments of sheer emotional panic. There's a scene where Jennifer Garner pedals a bike furiously down the sidewalk, wearing a power suit and a helmet, screaming at people to get out of her way that is as screwball as the film gets. She's a wonderful comedienne (always has been), awkward and emotional, and the stakes for her character are life-and-death. Her boss, played hilariously by Megan Mullally, is imperious, sarcastic, and unforgiving. There's a cameo by Dick Van Dyke that is completely absurd. Steve Carell manages to bring the anxiety of our current times into his role as a guy who has to bring his wailing baby to job interviews, and wonders if he will ever find his way again.

The sense of collective mania is the film's strongest point. There are a couple of vignettes that don't play as well as they should (the disastrous school play being an example), but then the film gets back on track, and suddenly Steve Carell is wearing a pirate shirt with the sleeves catching on fire, and everyone looks around panicking, "What the heck has happened to our family? Will this day never end?"

The lesson is here, as it was in the book: everyone has bad days and the bad days will pass; tomorrow is another day. Things may seem bleak, and Philip Parker may strut around like the Fonz, but it's best, when at all possible, to learn how to laugh at the bad times. In Arteta's smart and funny film adaptation, it is not just Alexander who has to learn that lesson. Everyone needs the reminder. 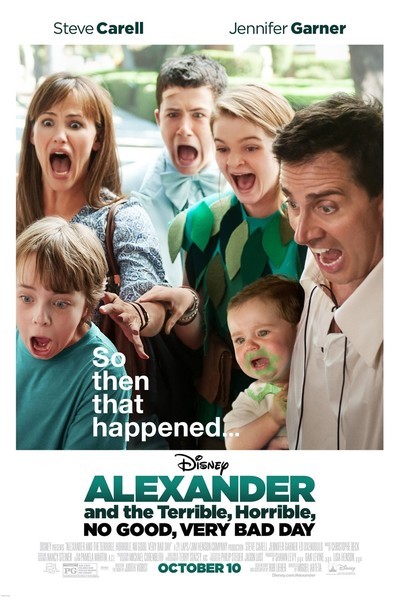 Alexander and the Terrible, Horrible, No Good, Very Bad Day (2014)

Rated PG for rude humor including some reckless behavior and language