In 2002, a group of women in Uttar Pradesh formed a newspaper. They called it Khabar Lahariya (translated as "Waves of News"). Everyone expected that the project wouldn't amount to much, but Khabar Lahariya is thriving 20 years later. This entirely women-run news outlet has a digital platform, an active Facebook page, as well as a YouTube channel (10 million views and counting). The women do on-the-ground reporting of breaking news, all filmed on their cell phone cameras, as well as painstaking (and often dangerous) gumshoe investigations on the issues affecting their community: unsafe living and working conditions, political corruption, the epidemic of rape and violence, particularly against the Dalit population. These reporters are all Dalit women, a group considered so "untouchable" they aren't even included in the caste system. But Khabar Lahariya persists, even in the face of community hostility and resistance from families, husbands, in-laws. "Writing with Fire," Rintu Thomas and Sushmit Ghosh’s documentary debut, follows these brave reporters as they work their beats, showing their struggles, triumphs, determination.

At the center of "Writing with Fire" is Meera, chief reporter of Khabar Lahariya, who not only tracks down stories and reports on them, but oversees the newspaper's pivot to digital, and mentors younger journalists (many of whom have no journalism experience). Meera got married at age 14, but her in-laws allowed her to continue her schooling. Now she has her Master's, and is a working mother, with a husband who still seems to think (and hope?) that Khabar Lahariya is going to fail. He's fairly easy-going, but there is some shame that his wife is out at all hours of the night, that she is working at all. Two other women on the newspaper staff, Suneeta and Shyamkali, are also figures in "Writing with Fire"'s narrative: Suneeta focuses primarily on illegal mining, and is fearless, interviewing huge groups of miners who not only don't want to talk to her, but leer at her, try to touch her. She bats their hands away and keeps barking questions at them. Meanwhile, the shy and tentative Shyamkali is so green she doesn't know how to use a cell phone, and is extremely confused by almost every aspect of the job (Meera has to explain to her what a story "angle" is). But Shyamkali is committed to learning. The challenges are multiple. How do you keep your cell phone charged when you don't have electricity?

Journalism is a mostly male profession, as well as an upper-caste one, so these women had (and have) a very tough road. Every time they enter a space, be it a village, a mine, or a government building, they are surrounded by men. Some of the stories they cover are extremely sensitive. They are literally risking their lives. Over 50 journalists have been killed in India since 2014, making India—along with Iraq, Mexico, the Philippines, and Pakistan—one of the most dangerous locations on the planet for journalists. It's even more so for women, and a Dalit reporter is unheard of. The men they interview often don't know how to handle being interrogated by small women holding up cell phones, women undeterred by condescension or hostility.

Thomas and Ghosh’s approach is personal and intimate. There is no distance from the subject, and the film follows the paper's journalists as they cover different stories (a dangerous mine run by a "mining mafia," an epidemic of Dalit women being raped, Dalit villages with no indoor plumbing, and bigger stories like important local elections with national implications). When the women talk to the camera, there's a sense of familiarity and openness there, suggesting how deeply the filmmakers have embedded themselves in their subjects' lives. Outside pressures affect the women's work, and vice versa. Meera is not there as much as she would like to be for her kids. One is falling behind in school. Suneeta is unmarried, and wants to stay that way, although the pressure from her parents is getting to her. Once you marry, you vanish. Shyamkali has very little education. Her husband beat her when she wouldn't quit her job at the paper. The women state their reality in matter-of-fact tones, and then trudge back out into the hostile world to do their jobs, barging their way into rooms where they are not wanted.

"Writing with Fire" does not go into the paper's origin story, and this is an obvious missing element. The film joins up with Khabar Lahariya in 2018-19, during the extremely divisive election season, when the paper buzzes and whirs with nonstop activity. Information about how the paper got started—who started it? How did they recruit staff? How small was the staff at first?—would have been extremely helpful as context. Nationalistic and religious fanaticism—on the rise around the world—is felt deeply in Uttar Pradesh, and women, as always, are in the cross-hairs. Women's freedom, already tenuous, trembles in the balance. The women are keenly aware of this.

"Writing with Fire" is a powerful piece of work, although it moves at a mostly slow and steady pace. Near the end, the once-cowed and incompetent Shyamkali is seen pushing to the front of a crowd of reporters to get her footage, cell phone camera held high. It's an extremely emotional moment, presented without underlining. We have gotten to know her over the course of the film. We see her incredible progress. The fate of Suneeta, one of the best reporters on staff, relentless and courageous, is similarly emotional. It's impossible not to invest in these women, in what they are doing, in what they so consciously stand for. Meera says, "I believe journalism is the essence of democracy." Considering the context of Uttar Pradesh, and of Khabar Lahariya's devotion to telling the stories that those in power want to keep hidden, these words could not be more true. "Writing with Fire" is an urgent reminder of journalism's importance. 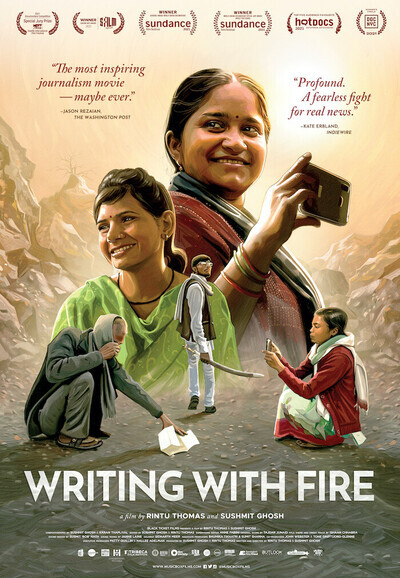 Meera Devi as Self

Suneeta Prajapati as Self