The first five minutes of Pixar's "Up" were brilliant, but they have a lot to answer for, because they encouraged animated filmmakers to reach for gut-punch twists that their movies don't always earn. Such is the case with "Wonder Park," a film about a brilliant, science-minded girl named June, aka "Junebug" (Brianna Denski), who has a special relationship with her mother (Jennifer Garner). The two spend hours playing on the floor of June's room with stuffed animals and other toys, fashioning a world of imagination anchored to Wonderland, a theme park so fabulous that it could never exist in reality because not even the gross national product of the ten richest countries could fund it (plus, a lot of the rides are hilariously dangerous, like the one that hurls people from one side of the park to the other with what look like metallic baseballs with windows). Then June's mom is diagnosed with a life-threatening illness (never stated, but apparently cancer) and has to go away for treatment all summer, leaving June to attend math camp against her wishes while she worries that her dad (Matthew Broderick) is wasting away unattended.

But June makes the snap decision to get off the bus en route to math camp and wander into the forest, where she encounters a fully realized version of Wonder Park that's fallen into disrepair thanks to an onslaught of zombie monkeys that used to be adorable and harmless. The eccentric, lovable talking animals who were once at the center of her playtime with mom are beleaguered and depressed, fearing the park's complete eradication (and their own vanishing, probably).

The gang includes a bear named Boomer (Ken Hudson Campbell) who is supposed to be hibernating and keeps falling asleep in narcoleptic fits; a porcupine named Steve (John Oliver, seemingly warming up for his role in the CGI remake of "The Lion King") who's in charge of park safety; Greta (Mila Kunis), a lovable boar; and a couple of beavers named Cooper (Ken Jeong) and Gus (Kenan Thompson) entrusted with park maintenance. The most fascinating character is a chimpanzee named Peanut (Norbert Leo Butz), a former visionary and master showman who served as the intermediary between the world of the park and the "real" world beyond. In an early sequence, we see him taking whispered orders from June's mother that are conveyed by June herself. But when June finally enters the park, Peanut has gone into hiding, and it immediately becomes clear that the key to saving the park lies in finding him and coaxing him back into circulation.

Meanwhile, June's mother's cancer diagnoses looms over the story. Although adults will probably pick up on the impossibility that the movie is going to kill her off at the very end after letting June and her dad worry about her for ninety-plus minutes, it still seems a bit manipulative to use this as a dramatic sword of Damocles, especially when the script mostly fails to connect it to the metaphorical action happening inside Wonderland itself.

More than one review has compared this film to "Inside Out," and the comparison works in the least flattering way. The Pixar movie had an intricately worked-out system of metaphors that somehow never became too abstract or didactic, and that always tied into character, plot, and theme. This one keeps losing focus. There are stray flashes here and there indicating what "Wonder Park"might've been going for. The teeming hordes of monkeys keep growing in population and strength, like cancer cells, threatening to subsume and destroy the park. Peanut is a stand-in for June the would-be Disney imagineer, a preternaturally gifted child who is already worried that if her mom dies, she'll lose both her emotional connection with her and her own creative gifts. It's not as if "Wonder Park" were incapable of sensitively handling all this inherently loaded subject matter. But what's onscreen gives little indication that the story and themes have been thought through in a way that would give the terminal illness plot line more than cursory consideration.

But so much of the needlessly complicated and rules-driven action inside the park plays like wasted motion, visually as well as narratively speaking—a lot of rushing about and yelling and things crashing into other things while the zombie monkeys swarm the periphery, like ghouls on "The Walking Dead." And the standard-issue harmless-smart-ass dialogue, which is very much in the vein of the Pixar/Dreamworks/Blue Sky usual (this is a Paramount-Nickelodeon production), doesn't so much patch it all together as disrupt any delicate spell that the film can weave.

This is the first major feature film I can think of that was released without any director credit at all (the assigned director, a Pixar veteran, was relieved of duties following sexual harassment allegations last year). The lack of, er, direction shows in the finished product, though it's impossible to say whether a stronger hand would've resulted in a better quality film or an almost equally bad film with a bit more personality. Melancholy in all the wrong ways, this is a mostly forgettable movie that only makes a strong impression when it's disturbing or saddening in a manner that the film itself seems only dimly aware of. 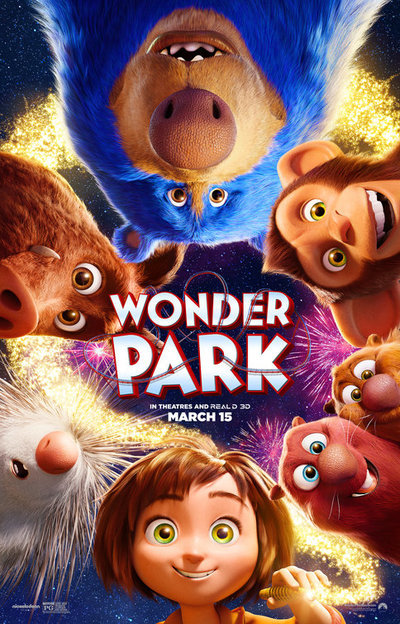 Rated PG for some mild thematic elements and action.

Mila Kunis as Greta the Warthog

John Oliver as Steve the Porcupine