One of the occasional challenges of movie going is the thriller with one twist too many. Who could quite completely understand, for example, the plots of "Bullitt," "Night Moves" or "The Long Goodbye"? We counted off the characters, we remembered the loop-the-loops in the plot, we added up the clues and quite frankly, we were defeated.

But those movies were fun all the same. They got in too deep for their own interior logic, but so what? The trip was worth the ride even if we were totally baffled about where we were supposed to be going. We forgave them. What we cannot forgive, however, is a thriller with one twist too few: a thriller with a plot that sets us up to suspect one character . . . and then reveals that is the guilty character!

"Windows" is a movie like that, a thriller in which we suspect right at the beginning that so-and-so is going to turn out to be the villain ... and then, an hour later, after the plot thickens, there is the less-than-astonishing revelation that so-and-so is indeed the villain - just as we suspected. "What's this?" we ask ourselves. No twist? No double-reverse plot switch in which the villain turns out to be framed and the good guy winds up with a knife in his hand and a sneer on his lips? If there's anything worse than a thriller with a totally unbelievable twist at the end, it's a thriller with no twist at all.

"Windows" plays that dirty trick on us, and I can't figure out why. Maybe it thinks it's giving us a deep psychological insight, in its creakingly obvious story of a voyeuristic lesbian knife-murderer, but what we're actually getting are ancient clichés in which the killer dyke turns out to be a pussycat at heart.

The movie stars Talia Shire as a shy young woman, in the throes of a divorce, who is attacked one night when she returns home to her empty apartment. The killer holds a knife to her throat and forces her to plead for mercy into a tape recorder. And then, a few days later, she finds herself in a cab driven by, you guessed it, the same guy.

But there is more. The guy claims he was paid to carry out the attack. And the person who paid him is none other than . . . well, I won't give away the surprise, but the movie does. The real villain has Talia Shire in view all the time through a telescope, and since we know who the villain is, there's no plot thrill to grow out of Shire's own eventual discovery of that fact. After Shire does discover who's after her, and why, there's a long and embarrassing sequence of threats and moans and pleadings and deep breathings, and then the movie's over as arbitrarily as it began.

Too bad, too, because there were elements here that could have produced a better film. The movie marks the directorial debut of Gordon Willis, the Academy Award-winning cinematographer of "The Godfather," who makes this movie look very good, but fails to make it a good-looking movie about things we come to care about.

The problem's at the script level. "Windows," in its present form, consists only of what happens on the basic level of victim-villain-confrontation. It needed a rewrite to add at least one more level of possibilities and blind alleys, phony suspects and false leads, so that what finally happens would come as a surprise. Since it doesn't, the movie has to succeed or fail as a study of the psychologies of its characters. And it's woefully thin on that level: Its lesbian villainy is such a shameful compilation of every two-bit cliché on the subject that we're distracted from the movie's possible thrills and scares by just plain embarrassment for the filmmakers. 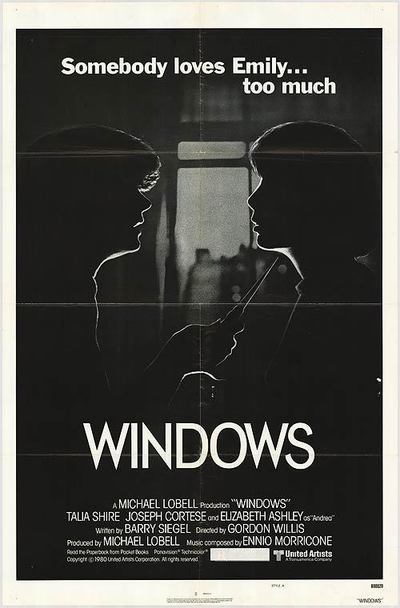