Like a lot of French films, "Wild Reeds" opens with a wedding. But it is a wedding of desperation, not romance. It is 1962, near the end of the Algerian war that bitterly divided France. The groom has been serving in the army in Algeria, and during the wedding feast, he confesses to a former teacher that the only reason he got married was to go on leave. He begs the teacher, a Communist Party member, to hide him so he won't have to return. There is a bond of love between them, but she refuses. Three days later, he is gone, and soon after that, he is dead.

The wedding has introduced many of the key players in the story, although at first we don't realize who they are. The teacher, Madame Alvarez (Michele Moretti), has a daughter named Maite (Elodie Bouchez) who is a student in the school. A boy named Francois (Gael Morel) is her best friend. Another of his close friends is Serge (Stephane Rideau), the younger brother of the dead soldier.

At the funeral, as Serge runs away, blinded by tears, Francois sends Maite after him: "Only you can help him." Maite says something awkward about the brother's heroism, but Serge says bitterly, "He wanted to escape. Ask your mother." The war, which seemed far away from the quiet provincial school, now seems closer, and it comes closer still with the arrival of a new student: Henri (Frederic Gorny). He is a ped noir, an Algerian-born Frenchman, who has fled with his family.

Francois is uncertain of his sexuality, and his confusion is complicated by inexperience. Maite is his best friend, but they keep at arm's length from each other. His secret is that he is attracted to Serge, a boarding school veteran who thinks nothing of it when they do have sex, but is not homosexual and doesn't want any deeper involvement with Francois. Serge, in fact, is attracted to Maite.

And Francois is tormented by his feelings, staring in his mirror and calling himself names.

All of this perhaps sounds more steamy than it is. Director Andre Techine, who says the story is based on his own memories, wants to show his characters in the middle of political and personal upheaval, and the character of the Communist teacher is important because she brings her feelings about the Algerian war into the classroom, causing her students to question government policy at the same time they question their own values.

They are also, after all, teenagers, and the soundtrack of the movie is heavy with hit records of the period (even some by the Beach Boys). And yet the movie is not nostalgic in the way that, say, "American Graffiti" was. Young people in France often take intellectuals as their heroes, and Camus was probably more important to these kids than Elvis. They are thoughtful, they talk earnestly, they feel deeply.

When Francois becomes convinced that he is gay, he reacts in a way that would seem strange to an American teenager. He has known for some time that the man who runs the shoe store in town is evidently a homosexual. So, Francois goes downtown and enters the store - for what? To ask the man what it means to be gay, and how one goes about it? Probably, although Francois loses his nerve. But his impulse is revealing. He believes that if he asks the right questions, he can get the answers he needs.

"Wild Reeds"" is one of the most honored of recent French films; it won the Cesar, France's equivalent of the Oscar, as the best film of 1994, defeating "Queen Margot" and "Red." I have a suspicion it resonates more deeply for the French than it can for us, because the period of the Algerian war resonates in their emotions the way Vietnam would for us. Some of the political undertones may go astray, but the emotional center of the film is touching and honest. 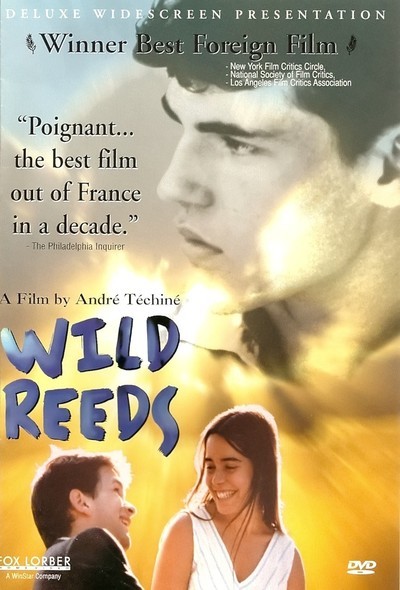