Before we dig into the pungent and chunky Irish stew that is “Wild Mountain Thyme,” let us first talk about the accents. They’re a problem, and they’re all over the place.

Granted, an Irish accent is among the hardest to master, unless you possess Streepian levels of mimicry abilities. Hell, I’m 44 percent Irish according to my latest Ancestry.com DNA analysis—which explains the hereditary alcoholism and inability to tan—and I wouldn’t even play around with one while joking with friends, much less as the star of a motion picture.

And yet, here we have a bevy of established actors doing just that, with varying degrees of success. Jamie Dornan is the most accomplished, unsurprisingly, since he’s Irish himself—albeit from Belfast, several hours away on the opposite coast from County Mayo where “Wild Mountain Thyme” is set. Emily Blunt’s is wobblier than you’d expect, given that her musical theater background should, in theory, provide her a strong ear for such a challenge. And then there’s Christopher Walken, who’s essentially delivering his lines in his trademark, halting style, with just the slightest bit of a brogue sprinkled on top. It’s … awkward. It’s as if he’s barely even trying, which perhaps is for the better.

But it also serves as a distraction right off the top, when we hear Walken say in an enthusiastic voiceover at the film’s start: “Welcome to Ireland. My name’s Tony Reilly. I’m dead!”

These three sentences set the tone for the rest of John Patrick Shanley’s film in the conflicted reaction they’ll stir in you. Over and over again, you won’t know whether to feel baffled or amused—although by the end, the former feeling most assuredly dominates the latter. In adapting his Broadway play Outside Mullingar for the screen, Shanley still aims for big, theatrical emotions, resulting in a film that’s relentlessly whimsical. And in trotting out myriad Irish stereotypes, it’s hard to tell whether he means them earnestly or as knowing self-parody. After the third or fourth time you see sweeping aerial shots of lush, verdant hills with the sound of lilting pan flutes playing the background, you half expect to see a leprechaun bounding across the countryside, hiding from those kids who are “after me Lucky Charms.”

In the midst of all this eye-catching idyll (the work of cinematographer Stephen Goldblatt) is a romantic comedy desperately straining for the lightness of a fairy tale. At times, the dialogue leaps and snaps, as you’d expect from the Oscar-winning writer of “Moonstruck.” Everyone’s so handsome and there are SO many cozy sweaters and clunky boots to enjoy on those rainy days. But these characters are barely more than a collection of quirks, and the thing that’s keeping them from being together forever has got to be the most ridiculous of all contrivances.

Blunt and Dornan co-star as Rosemary Muldoon and Anthony Reilly—Tony’s son—who’ve grown up in this rural wonderland and spent all their lives on neighboring farms. She’s sassy and no-nonsense. He’s gentle and a little awkward. A slight from childhood, which we see in an early flashback, and the rights to a small piece of land connecting their families’ properties serve as insurmountable obstacles to the fact that they’re clearly meant for one another. Besides knowing everything about each other, sharing decades of history and enjoying a lively chemistry, they’re the only single, gorgeous people of their age around. And so we must wait 102 minutes for them to acknowledge they’ve secretly been in love with each other all this time.

But the arrival from New York of Anthony’s cousin, Adam, eventually shakes Rosemary and Anthony from their romantic détente. Jon Hamm plays him with all-American, capitalistic swagger and greed (and, mercifully, no accent), and he serves as our conduit in marveling at this place that’s wondrous yet stuck in time. He’s flown to Ireland in hopes of staking his claim to the Reilly family farm—including that disputed stretch of road that links it to Rosemary’s—and perhaps to Rosemary herself.

As the farce escalates, we’re treated to such wacky encounters as Anthony practicing his proposal to Rosemary on a donkey, sparking a rumor among the local eccentrics about his affection for livestock. He also falls out of a boat, and while Dornan seems game for the change of pace this kind of physical comedy affords him, it’s not exactly his strong suit. Rosemary, meanwhile, has a majestic horse that has a habit of running away in a bit of an obvious metaphor. But she also gets a chance to reveal her sensitive side when she gets up on stage at the pub and sings the traditional, Irish folk song that gives “Wild Mountain Thyme” its title.

And it’s in moments like this, when the film settles down and stops trying so hard to please us, that it actually connects. The most effective scene in the whole film is an understated one that takes place in Rosemary’s kitchen, when she and Anthony begin to get honest with one another while trapped inside during a storm. There’s genuine emotion and tension mixed in between the laughs in this climactic, claustrophobic conversation. And because Blunt and Dornan’s work is so strong here, you’re likely to forget that their accents are so weak.

But alas, it’s a mere glimmer in the eye. Because Shanley ultimately reveals the real reason Anthony and Rosemary have been apart all these years, sending the film off the rails and beyond those scenic, winding roads and rolling hills. This piece of information is so bizarre, it truly puts the “wild” in “Wild Mountain Thyme.” 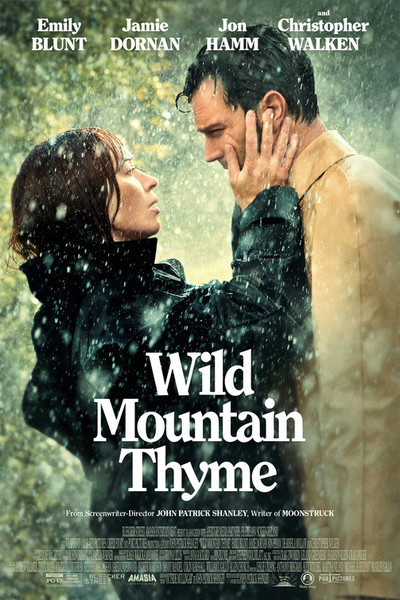 Rated PG-13 for some thematic elements and suggestive comments.