Why Don't You Just Die!

A simple plot emerges—blinkered twenty-something Matvei (Aleksandr Kuznetsov) tries to avenge his girlfriend Olya (Evgeniya Kregzhde) by killing her abusive father Andrei (Vitaliy Khaev), a bent cop—and only ostensibly grows more complicated. Sokolov introduces more hard-living supporting characters, like Andrei’s desperate partner Yevgenich (Mikhail Gorevoy), as well as some contrived plot twists: Andrei says that he didn’t rape Olya, and his self-serving claim seems immediately plausible given Sokolov’s conspicuous emphasis on Andrei’s hefty and poorly hidden bankroll. Most of “Why Don’t You Just Die!” feels like a bloody Rube Goldberg machine whose main pleasure comes from watching each successive plot device lead us to a foregone conclusion: an appropriately unhappy ending where (almost) everybody is dead, and nobody gets Andrei’s money. “Why Don’t You Just Die!” is stylish enough, but it’s rarely as clever as it is busy.

Most of Sokolov’s bigger ideas are as superficial as his greedy antihero protagonists. Matvei’s story begins with a cartoon-like set piece that’s defined by manic camera movements and hyper-articulate sound effects. When Matvei tries to snag Andre with his claw hammer, we travel, visually and aurally, with his weapon of choice. Sokolov’s hyperactive camera even makes whooshing noises as it moves towards and away from his subjects.

Sokolov, who also edited “Why Don’t You Just Die!”, deserves credit for how dynamically paced this opening scene is. Production design Viktor Zudin and director of photography Dmitriy Ulyukaev make Sokolov’s movie look both as slick and grotesque as a David Fincher music video or one of “Amelie” director Jean-Pierre Jeunet’s early collaborations with co-helmer Marc Caro, specifically “Delicatessen” and “City of Lost Children.” Zudin and Ulyukaev help Sokolov’s images move, which is especially important in a scene where the young director’s camera drags us across Andrei’s living room, up a wall, and through a gaping hole into an adjoining bedroom.

But Sokolov’s images never move far enough; they’re usually more lively than they are life-like. Don’t get me wrong, I’m mostly charmed by any new movie that was seemingly made by young filmmakers who studied and then liberally borrowed visual cues from “Run, Lola, Run” and the work of Cinema du Look pioneers like Luc Besson (“La Femme Nikita”) and Jean-Jacques Beineix (“Diva”). But that’s also my biggest problem with “Why Don’t You Just Die!”: there’s nothing on-screen that is as compelling to think about as it is to look at.

That’s also sort of the movie’s focus and point, the latter of which Sokolov beats to death throughout—the shallow but pervasive effect of consumerism as it’s sold to modern Russians through images on TV as well as in brand clothing (Medavei’s New Balance sneakers and Batman hoodie) and post-USSR architecture (the green and orange tiles in Andrei’s bathroom). “Why Don’t You Just Die!” is presumably meant to be a shallow reflection of equally skin-deep people, as Andrei ironically announces to Yevgenich when they, in a flashback, investigate a bloody crime scene at a rich bachelor’s apartment: “Gilded f**king youth.” Everybody in this movie thinks that they’re smarter, or more righteous than everyone else, so everybody assumes that they’re more thoughtful or substantive than they are. Unfortunately, these characters are about as deep as a cardboard box, and eventually, that quality stops being endearing unto itself.

Thankfully, “Why Don’t You Just Die!” is compelling whenever its characters are most inexplicably violent. Sokolov spends too much time either foreshadowing or retroactively explaining why his characters are so eager to torture themselves with handcuffs, power drills, and firearms. But almost every scene where characters behave like exuberantly sadistic thugs is effectively repulsive. Your mileage may vary as far as how much arterial spray is too much, but Sokolov’s tendency of overdoing things sets apart his movie’s splattery, comically punishing violence. So while I don’t know if I need to see “Why Don’t You Just Die!” from start to finish again, I can see myself, at some future date, rewatching parts of this cheerfully grotesque meat-grinder of a movie. On mute, and one set piece at a time. 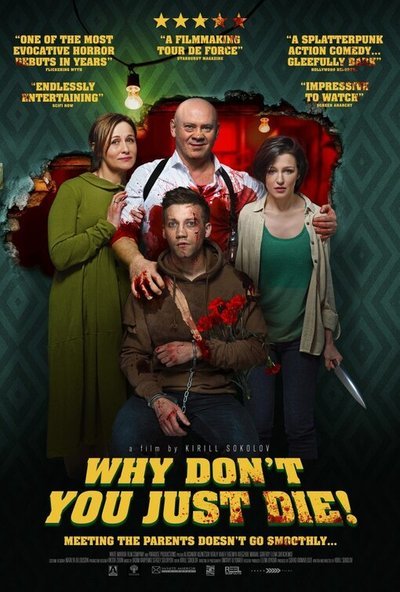