Why Do Fools Fall in Love

Frankie Lymon was 13 when he had his big hit record, and 25 when he died. The record fell like a gift from the sky, hit the top of the charts, and can still be heard on the golden oldies stations. The rest of his life played like the flip side. “Why Do Fools Fall in Love” tells the story of how he married three women (at least according to them), got into trouble with drugs and the Army, and self-destructed prematurely, leaving his ex-wives and/or widows squabbling in court over the estate.

There are several angles this material might have been approached from, and director Gregory Nava tries several without hitting on one that works. By the end of the film we're not even left with anyone to root for; we realize with a little astonishment, waiting for the court verdict, that we don't care who wins.

The movie is not really about Frankie Lymon (Larenz Tate), who remains an enigma. Nor does it have many insights into the three claimants to his estate: Zola Taylor (Halle Berry), a singer with the Platters, who was his first girl and his second wife; Elizabeth Waters (Vivica A. Fox), a shoplifter who loved him so much she became a hooker to pay for his drug rehab, and Emira Eagle (Lela Rochon), a church-going waitress who was there when he needed her, after he was drafted into the Army and sent to Georgia for training.

What made Frankie run? The movie clearly doesn't know. It sets the story against a convincing backdrop of the 1950s rock 'n' roll industry, provides some high-energy musical sequences, and finds moments of drama as Frankie is beaten by drug money collectors, steals a mink stole from one woman to give to another and threatens to throw dogs out the window--all while somehow remaining a lovable madcap. Well, most of the time.

The usual generic conventions seem missing. There is no real sense of loss in Frankie's death, since his early promise, if genuine, was so quickly dissipated. There is no sense that be betrayed the three women: He loved them all, after his fashion, and was so needy, he simply reached out to the closest one. An awkward courtroom scene at the end belatedly tries to pin some of the blame on a record producer (Paul Mazursky) who stole co-writing credit and perhaps a lot of Frankie's profits, but the producer, if guilty, was still not responsible for most of the events in the movie. Frankie was. His song should have been, “When I'm Not With the One I Love, I Love the One I'm With.” The movie's director is Gregory Nava, whose artistry in films like “El Norte,” “My Family” and “Selena” seems missing this time: His films usually proceed from passion and commitment, and here the inspiration seems to be missing. It's as if someone read about Lymon's three wives in court and decided it would be a great story, without ever deciding what the story was.

The four principal actors all provide the spectacle of talent without purpose: They do what they can with their characters and their scenes, but the screenplay doesn't provide them with an arc or a purpose. When their characters reappear, we haven't been waiting for them. When they're offscreen, we don't miss them. That's true even of Frankie, who is missing a fair amount of the time.

What approach might have worked? Hard to say. Maybe the whole thing should have been seen exclusively through Frankie's eyes, as a kid who has his 15 minutes of fame at an early age and then dines out for the rest of his life on other people's memories. That would have meant jettisoning the whole court case and its flashbacks, but the court stuff doesn't work anyway. Maybe straight chronology would have been a better idea, allowing Frankie to be the focus, and allowing us to follow his moves more clearly from one woman to the next and back again. As it stands, “Why Do Fools Fall in Love” never convinces us its story is worth telling, and never finds a way to tell it, even if it is. 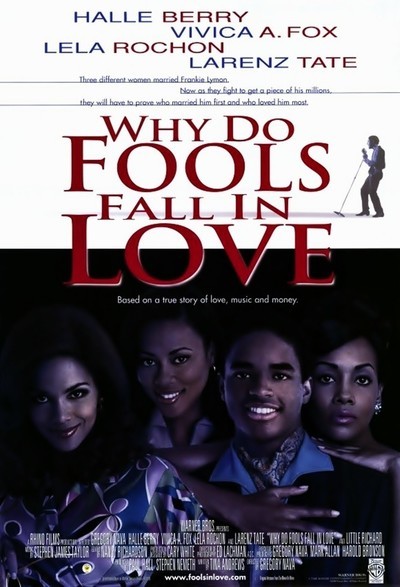 Vivica A. Fox as Elizabeth Waters