Liz Garbus’ HBO docuseries “Who Killed Garrett Phillips?” asks a question in its title that it not only can’t answer but doesn’t seem particularly interested in doing so. This is not a typical crime documentary, which often presents a murder in the context of its likeliest suspect. What struck me while watching Garbus’ excellent series is how much further I felt like I was getting from the answer to the question asked by its title. Being a true crime fan, I felt like I knew a lot about the horrible case of Garrett Phillips, but I’m now even more convinced that it’s a truly tragic story not unlike the murder of JonBenet Ramsey or the disappearance of Madeleine McCann in that we are unlikely to ever know what really happened. Garbus and her team focus with laser precision on a rush to judgment in a case that arguably allowed the real killer to escape, and revealed undercurrents of racism and incompetence in a small town in upstate New York. At its best, it reminded me of the landmark HBO docuseries “Paradise Lost” or the remarkable “The Staircase” in its level of detail and how it captures how people make the kind of drastic mistakes that allow the answers to get further and further out of reach.

On October 24, 2011, neighbors in an apartment building in Potsdam, New York heard an odd, disconcerting sound. It was described as a moan or a “no.” One went to the door of Garrett Phillips’ apartment and knocked, and they swore they heard someone click the deadbolt from the other side. The neighbor called the police, who arrived quickly, and this is important to the timeline, they thought they heard someone moving around in the apartment too. They didn’t break down the door – and this whole case might have been different if they had – and instead waited for the landlord. By the time the landlord got there a few minutes later and opened the door, the killer was gone and a 12-year-old had been strangled to death.

The investigation moved quickly, focusing on Nick Hillary, the ex-boyfriend of Garrett Phillips’ mother, Tandy Cyrus. The local cops in this mostly white community brought in the black soccer coach and began a baffling, confusing interrogation. Garbus includes large chunks of the “discussion” between Hillary and two Potsdam police officers, and it’s a stunning example of how quickly this case went wrong. The officers seem to want to push Hillary into a confession, but realize that this isn’t going to happen, and so they just dance around questions about what Hillary was doing when Phillips died. And when Hillary refuses to play their games, they basically panic and refuse to let him leave, culminating in a strip search. (One of the officers has the nerve to suggest that Hillary wasn’t the only person involved in this case strip-searched because, well, Garrett was too post-mortem. That’s the level we’re dealing with here.)

Here’s the big question you’re probably asking – did Nick Hillary kill Garrett Phillips? There were two major pieces of evidence against him. The killer jumped out a window to escape the scene of the crime and Hillary had an injury on his ankle that he didn’t reveal to the police at first. One of the officers also claimed they saw him limping (although video footage doesn’t support this). More urgently for the eventual prosecutors, there is surveillance footage from just before the crime of Garrett crossing a school parking lot and Hillary’s car seeming to follow him, turning in a direction inconsistent with going back to Hillary’s home. That’s about it. I’m not sure if Hillary killed Phillips – and it should be noted that deep into Garbus’ series she does arrive at the other main suspect, another ex of Cyrus who had way more friends on the police force – but I can tell you that there was nowhere near enough evidence to convict him. There wasn't even enough evidence to take it into a courtroom.

“Who Killed Garrett Phillips?” is at its best when it’s most detailed, offering lengthy segments from the aforementioned interrogation and text messages and emails between people involved in the case. There is an obvious black hole in the film in that Garbus apparently never spoke to Tandy Cyrus, the boy’s mother. After how much press this story has gotten – it’s been on a half-dozen true crime shows like “20/20” – it’s not hard to understand why Cyrus may not have any more to say, or perhaps Garbus knew the story she was telling wasn’t about a grieving mother but about a dead boy and the man accused of killing him. While it feels like Cyrus may have been able to connect a few of those dots, the real truth illuminated here is that some dots can never be connected, and some questions can never be answered, even those as tragic as the one this series asks in its title. 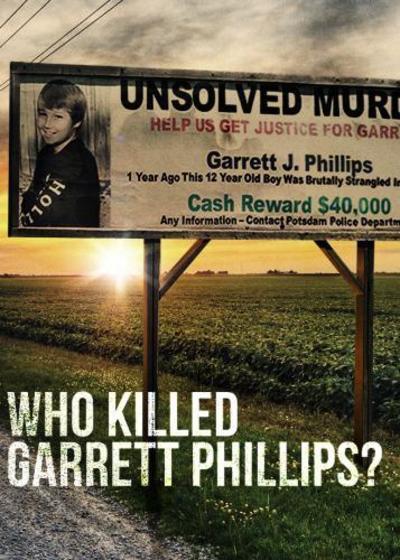