Michelle Pfeiffer has made a career out of playing devastating beauties—women who bewitch and beguile but ultimately seem unattainable. From early, showy roles in movies like “Grease 2” (which I love with zero irony) and “Scarface” through her more serious, Oscar-nominated work including “Dangerous Liaisons” and “The Fabulous Baker Boys” to her scene-stealing supporting performance in last year’s “mother!” Pfeiffer’s stunning looks and magnetic screen presence often have defined whatever character she’s played.

But a serious actress who shouldn’t be underestimated has long lurked beneath those piercing cheekbones and blue eyes. “Where Is Kyra?” finally allows her to explore the darker, unvarnished side of her talent and gives her the opportunity to do perhaps the best work of her lengthy, eclectic career.

The irony is that Pfeiffer not only has to disappear into the role, she nearly disappears, period, within the film’s working-class Brooklyn setting. Director and co-writer Andrew Dosunmu once again explores what life is like for myriad New Yorkers struggling to get by on a daily basis, as he did in 2013’s searing “Mother of George.” Here, Pfeiffer’s Kyra is our conduit to a world of anxiety and destitution within a seemingly exciting, glamorous city. And she’s absolutely heartbreaking with just the slightest register of sadness in a gesture or facial expression.

Dosunmu and his “Mother of George” collaborator, co-writer Darci Picoult, quietly introduce us to Kyra and her elderly mother (Suzanne Shepherd) as they go about their nighttime routine in the dark, cramped apartment they share. In time, we’ll learn that Kyra is recently divorced and unemployed, and she has moved back in with her ailing mom to help her with daily activities like bathing and errands. Finding even a part-time filing job is tough, but Kyra dyes her roots and puts on her game face, hitting the pavement each day in pursuit of elusive menial labor.

Working once again with the hugely talented cinematographer Bradford Young, Dosunmu frames them from afar—down a dark hallway or through a crack in the bathroom door. We’re spying on them, and we don’t want to make a sound for fear of disturbing the intimacy of their bubble, their bond. Young has such a beautiful, evocative touch, using low light and painterly shadows to establish a mood and create a sense of isolation. That’s been true in the wide variety of films he’s shot, from “Pariah” and “Ain’t Them Bodies Saints” to “A Most Violent Year” and his Oscar-nominated work on “Arrival.” Here, the effect seems to obscure Kyra’s existence even further—to make her world seem oppressively, inescapably small.

But Kyra’s situation grows even direr when her mother dies. The moment is powerful in its silence and stillness. Dosunmu pushes into the living room from the hallway ever so steadily as Kyra walks in and realizes her mother has stopped breathing in her recliner. She carefully reaches over and turns off the oxygen tank. She doesn’t know whether to sit or stand. She’s stunned, understandably—all of which Pfeiffer conveys in the space of a single shot.

The awkward small talk Kyra makes to the few people who attend the funeral indicates just how little of a life she’s had outside of her mother and these walls. Now, she has to figure out how to hold onto the apartment without any income.

But just when you suspect “Where is Kyra?” is going to be too bleak in a one-note, stoic way, Kyra lets it all out once she gets back home, and the overwhelming sense of being totally alone pours out of her. Then, finally, comes the title in all caps, giant white letters on a black screen, yanking you out of that melancholy and signaling a change.

“Where Is Kyra?” becomes a more actively stressful movie as Kyra resorts to increasingly dangerous schemes to stay afloat. You know she’s in bad shape when you can hear the sound of her scraping coins out of the bottom of her purse to afford a drink at the local dive bar. But things gets worse, even as they seem to get vaguely better with the introduction of Kiefer Sutherland’s Doug, who’s sitting a couple of stools down at the bar and also happens to be a neighbor in her mom’s building.

Doug gives her rare chance to forge a connection with someone, and while she’s initially resistant, it’s obvious she needs the human contact. Soon they’re doing shots, and you can imagine where it goes from there—and yet their relationship remains a mystery, even as it evolves. It’s unclear whether Kyra truly cares for Doug—who is decent and kind and also struggling economically, although not as drastically as she is—or she just craves the company.

There’s a great shot of the two of them leaning against the wall at a building-wide gathering, drinking beers together. Dosunmu places them slightly off-center in the frame and shoots them at a distance, amid wood paneling and sparse white lights. In holding that shot for a while, he makes you want to lean in to see and hear them as they fumble through half-hearted attempts at flirting.

Eventually, Doug ends up being dragged into her devious plan to survive. You sort of can’t blame her, though; “Where Is Kyra?” depicts in spare but vivid ways her escalating desperation, and the dread of her creeping, abject poverty. She can see her breath when she climbs into bed at night because she can’t afford to turn on the heat. (At least she still has a bed, though; she’s had to sell much of her mother’s furniture.)

In the film’s most deeply uncomfortable scene, Kyra goes back to her ex-husband, begging for money. The camera holds on her face for the entire conversation, registering every flinch and sigh as she shuts her eyes and pushes out the words. It’s pure survival instinct, and Pfeiffer portrays it chillingly. Kyra has to be various versions of herself depending on whom she’s with and what she needs from them—but the act becomes more difficult the deeper she gets in over her head.

The one element of “Where Is Kyra?” that isn’t the slightest bit subtle is its score. Especially in moments of panic or crisis, it cranks up with a noisy, dissonant distortion. It seems intentionally off-putting—like the sound of a metal door that’s rusty and stuck and needs to be oiled—signifying perhaps that Kyra is still here, and she’s not going quietly. 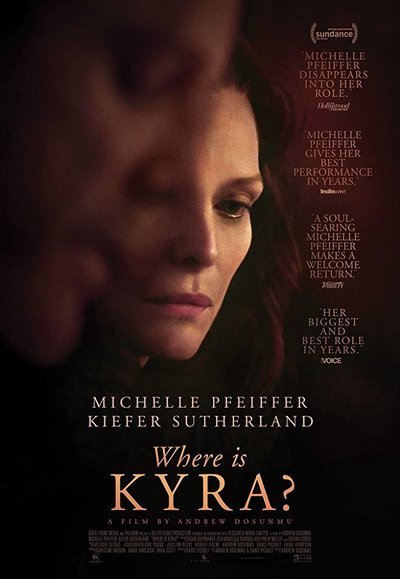