Overlooked historic facts can be cinematic gold, especially when met with noble intentions. While this is the on-paper case with British filmmaker Amma Asante’s “Where Hands Touch,” a heartbreaking yet baffling World War II film on the little-known story of the tormented biracial children of Rhineland, her latest unfortunately crosses a troubling line with its romance between the lead female character and a disciple of the Hitler Youth. I wouldn’t go as far as claiming that “Where Hands Touch,” which premiered at the 2018 Toronto International Film Festival earlier today, romanticizes Nazis as some of the early controversy surrounding the film has suspected; but when the complex, humanizing portrayal of Nazi characters and SS soldiers enter the picture, good intentions do derail fast, leading to disturbing outcomes.

Which is too bad, because actor-turned-director Asante has an immensely sensitive touch in bringing multifaceted period yarns of intersectional identities to life. Inspired by a true story in a script by Misan Sagay, her “Belle” perceptively portrayed a young biracial woman born into white aristocracy in 18th-Century England, cleverly turning the traditional costume drama up on its head. In the more recent, gentle historical drama “A United Kingdom” (adapted by Guy Hibbert from Susan Williams’ book), she put forth a thoughtful chronicle of the controversial interracial marriage of a white British woman and the Botswana King, Seretse Khama as they overcame the expected and unforeseen social hurdles standing in the way of their union. Based on the themes of her filmography, it is no surprise that Asante takes on a little talked about dimension of another slice of history depicted in countless films. She shines a light on mixed-race German kids—born to German mothers and French-African soldiers stationed there after the first World War—who were degradingly labeled as ‘Rhineland Bastards’ and feared for their lives under Hitler’s National Socialist regime. If only her film wasn’t miscalculated with muddled priorities. With “Where Hands Touch,” Asante unintentionally yet awkwardly juxtaposes a tragic sidebar of World War II and its central crimes against humanity to the genocide of the Jewish population in the Holocaust, with regrettable consequences.

The film centers on Leyna (a remarkable Amandla Stenberg, courageous and fragile in equal measure), a biracial young girl who quietly lives with her protective and idealist mother Kerstin (Abbie Cornish, surprisingly forgettable) and her young brother in the countryside. But when a Nazi officer orders the sterilization of Leyna and confiscates her legal papers during a bracing inspection visit in 1944, Kerstin decides to move her family to Berlin, where they could keep their heads low and live in safety, at least temporarily. There, Leyna accidentally meets and slowly falls in love with Lutz (George MacKay, leaving an impression with a tricky part), a member of Hitler Youth, raised by a single father from the Nazi party. Lutz and Leyna gather in secret, listen to Billie Holiday records, and so on.

“They hang people who look like you in America,” Lutz says to Leyna in one scene, reminding the audience of her no-win situation across the globe. Asante engages with Leyna’s race and her in-between, socially disadvantaged status insightfully, yet she also frustratingly paints her as a naïve girl, not fully aware of the extent of the terror running amok on in Hitler’s Germany. This unrealistic characterization gives her mother Kerstin the opportunity to pay occasional lip service to the honorable ideals against Hitler’s Aryan regime. Yet those scenes seem more dutiful than inspired or genuine. The most uncomfortable section of the story arrives when Leyna, now pregnant and separated from her family, gets sent to a labor camp, sharing a fence with the Jewish captives in the same complex. While her horrors deeply scar the viewer, knowing but not seeing the dread on the other side of the fence leaves a sore trace, dangerously close to offensive “The Boy in the Striped Pajamas” territory.

The common thread in Asante’s work is present day relevance of history—the ripple effects of historical racism and intolerance on contemporary times. In that, she deserves some credit for trying to understand how a nation would blindly follow the hateful rhetoric of a dangerous leader and seek urgent present-day answers in her pursuit. But here's the thing: all that seems possible without the romantic entanglement of Leyna with a Nazi boy. While “Where Hands Touch” demonstrates confident filmmaking from a technical standpoint, Asante’s plot choices around the ambiguous development of Lutz feel irresponsible, especially during these risky political times that uncompromisingly demand us to be the opposite.

This review was filed from the Toronto International Film Festival on September 10th, 2018. 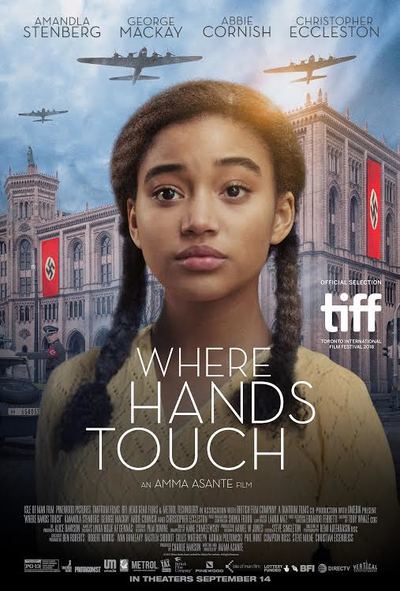