When Jeff Tried to Save the World

Just as nice guys tend to finish last, nice movies often get lost in the shuffle. It’s tempting to take for granted the delicate balancing act required for creating characters who are endearing rather than cloying, empathetic but not at all saintly. In her directorial feature debut, 23-year-old Kendall Goldberg has crafted a low-key charmer that leaves us with a surprising amount of good feeling. “When Jeff Tried To Save the World” is a slow burn of a comedy that never relies on the proverbial Deus ex Machina to fix its titular protagonist’s problems. Goldberg doesn’t pretend that closure is a given in life, but she’s wise enough to know that there is almost always an alternate route one can take on the path toward betterment. No matter how trapped we may feel within our daily routine, there is a potential escape beckoning to us, if only we strain to look for it.

This was the lesson of Goldberg’s delightful senior thesis film, “Gloria Talks Funny,” about a voice-over star (played by Candi Milo, a.k.a. Sweetie Pie on “Tiny Toon Adventures”) who finds herself being replaced on the reboot of her hit show with a young social media celebrity. Only when riffing on her real-life predicament at a standup club, a la Mrs. Maisel, does the actress realize that she is much funnier as herself than any of her cartoon personas. For Jeff (Jon Heder), his job as manager of a small town bowling alley is not the purgatory friends and family may perceive it as from the outside. What the old-fashioned site provides him with is a sense of sanctuary, epitomized by its tagline, “Where kids can be kids—and adults can too.” Even in his more outlandish comedic roles, Heder has always excelled at the art of understatement, suggesting so much with the slimmest supply of dialogue. When he admits that the world appeared too “complex” upon graduating from college, the way Heder handles the line tells us so much about the gravitational tug of nostalgia at a time of near-apocalyptic discontent. It’s no mystery why he feels safe within his self-imposed cocoon strewn with childhood trinkets, not least of all the PAC-MAN-style arcade game he designed himself, thriving proof that Jeff’s skills could take him far beyond the realm of shoe-cleaning.

The bowling alley, dubbed Winky’s World, isn’t all that far removed from the roller rink or drive-in theater still welcoming customers in my hometown of McHenry, Illinois, thanks to each company’s diligence in making the necessary upgrades. Alas, Winky’s won’t be able to make the leap, in part because building owner Carl (Jim O’Heir of “Parks and Recreation”) has other priorities. Many of the film’s biggest laughs arrive during a sequence where Jeff attempts to steer away potential buyers of the building by having his employee Frank (Steve Berg) rattle off a series of scripted claims as to why their purchase is destined to become a money pit. Jeff further adds to their befuddlement by filling the oft-quiet alley with a barrage of bowlers on the day of their visit, luring in bystanders with the promise of free pizza. A lesser picture would’ve allowed these miniature triumphs to result in a standard feel-good ending, yet the script coauthored by Goldberg and her frequent writing partner, Rachel Borgo, is too honest to settle for such clichés.

While this plot thread more or less follows the structure of the filmmaker’s short film of the same name—which was produced as a proof-of-concept for the feature—the heart of the movie is contained in the scenes Jeff shares with Samantha (Maya Erskine). She’s the friend of Jeff’s sister, Lindy (Anna Konkle, soon to be featured alongside Erskine on Hulu’s “PEN15”), who crashes at her brother’s apartment uninvited as a last ditch effort to infiltrate his enclosed world. It’s clear Samantha feels guilty about how Lindy had her tag along, yet every time she tries to smooth things over, Jeff is always the first to apologize. Eventually we realize that Jeff has neglected to tell anyone in his family about his current profession, including his mother (Elizabeth Laidlaw), for fear of humiliation. With Lindy, he suddenly feels comfortable enough to open up.

There are echoes of “Punch-Drunk Love” in the harrowing sibling dynamic between soft-spoken Jeff and maddeningly self-involved Lindy, not to mention the tenderness that Samantha exudes when hanging with Jeff. If he’s the Adam Sandler to Lindy’s Mary Lynn Rajskub, then Samantha is most certainly the Emily Watson of the movie, even wearing the Watson character’s signature color of red in the scene where Jeff starts taking a liking to her (how can he resist her request for a two-player game?). Of course, Heder achieved cinematic immortality when struggling to find the right words for a given moment as Napoleon Dynamite, telling his prom date, “I like your sleeves. They’re real big.” Jeff shares some similarly amusing banter with Samantha in the early stages of their friendship, declaring, “Yes, go clean up!”, as she’s about to take a shower. Yet Goldberg and Heder never push Jeff over the line into caricature, and they treat his anxiety with the seriousness it deserves.

Watson had to find some way into Sandler’s world in order to fall for him, and Erskine shows us precisely what draws Samantha to Jeff. She’s intrigued by his peculiarities and doesn’t view him as an object of pity. More importantly, she also shares his unsettled perspective on adult life, in light of her own mother’s impending remarriage. Just when I found myself ready to write off particular characters as one-note adversaries, they proved to be more human than expected. Konkle has a touching moment late in the film where her character softens the instant she realizes that Jeff is wholly unaware of the challenges that have plagued her relationship with their parents. Occasionally the dialogue can be too on-the-nose, such as when Carl casts off his own villain facade, yet Goldberg’s utter disinterest in condescension is precisely what makes her movie so lovable.

“When Jeff Tried to Save the World” has the added distinction of being the latest indie produced by Shane Simmons, who has made several of the finest Chicagoland-set films in recent years, including Stephen Cone’s “Henry Gamble’s Birthday Party,” Michael Glover Smith’s “Mercury in Retrograde” and Clare Cooney’s “Runner.” Goldberg’s warm-hearted movie is a worthy addition to this collection of character portraits, where the most illuminating truths are left unspoken, tucked into the halting pauses between words. So assured is this debut that it reminded me of a Duplass Brothers picture, the title of which it could’ve easily borrowed, albeit with the following revision: “Jeff, Who No Longer Lives at Home.”

“When Jeff Tried to Save the World” will be available on VOD worldwide Friday, December 7th. 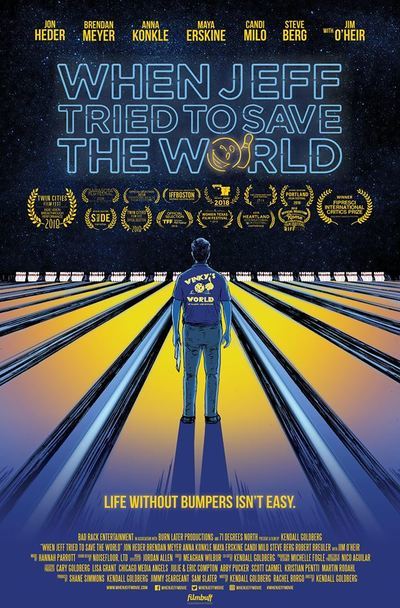