What Happened to Monday

Tommy Wirkola moves on from Nazi zombies (he did both of the “Dead Snow” movies) to identical sisters in the Netflix original film “What Happened to Monday,” a showcase for Noomi Rapace’s range that will suffer in comparison to the similar “Orphan Black,” in which the amazing Tatiana Maslany plays identical clones. The Emmy-nominated actress gives a master class with that show, offering each of her characters their own identity, personality, flaws and strengths. Rapace doesn’t have nearly the same material to work with but she does the best she can with this sci-fi curiosity, a movie that starts with a relatively clever concept but then doesn’t build enough on its structure. On a narrative level, it’s the kind of script that feels like it never got past the concept stage, almost defiantly refusing to build on its central premise with a world that seems three-dimensional or characters who feel like more than devices. Wirkola stages a few excellent set pieces and Rapace is fantastic, but the general lack of entertainment value has to be considered disappointing given the potential of the entire piece.

In a future not that dissimilar from the one imagined in “Children of Men,” human beings have exhausted our planet’s resources. It’s resulted in a shocking but practical government decree: families can only have one child. If a family has more than one child, the extra child will be taken by the government and cryogenically frozen until a time when we have colonized another planet or found a way to create more natural resources. The woman in charge of this program, Nicolette Cayman (Glenn Close), is the kind of ruthless leader who promises a better future while stripping families of their offspring.

When Terrence Settman (Willem Dafoe) has septuplet grandchildren, their mother dying in childbirth, he knows he’s in serious trouble, but he crafts a masterful scam to keep his granddaughters alive. They will essentially take turns being Karen Settman, who eventually becomes a powerful businesswoman, but is really seven sisters working a very elaborate “Parent Trap.” Named after days of the week, Monday, Tuesday, etc. must inform the entire sisterhood every night about every detail that happened during the day. And in one of the film’s more ingeniously grotesque twists of fate, they must all look exactly the same. Think about the potential ramifications. If one sister loses a finger …

And then Monday doesn’t come home one night. The other six girls, who have distinct enough personalities to allow Rapace to have a little fun—one is more of a bookworm than her sisters, one is more physically outgoing, etc.—have to figure out what happened to Monday. It leads them into the clutches of the Child Allocation Board, and the truth about Nicollete Cayman’s vision for the future.

It’s certainly not a bad idea for a sci-fi film, or an extended episode of “Black Mirror,” but screenwriters Max Botkin and Kerry Williamson needed another pass to take it beyond a very loose collection of action scenes. Most surprisingly given how “Dead Snow 2: Red vs. Dead” played with expectations and got only increasingly more gonzo, “What Happened to Monday” is kind of boring when it comes to style. There’s an awesome fight scene early on when the women are first tracked down by their enemies that features stunt work similar to Wirkola’s other films, and allows Rapace to show off the physical abilities as an action star she’s displayed before. But there’s a shocking amount of sitting around and talking in this movie about seven sisters named after days of the week. It’s almost as if the original script was more intellectual sci-fi, Wirkola pulled it as much as he could toward action, and it got stuck somewhere in the middle.

“What Happened to Monday” is just not as fun as you’d think it would be given the ridiculousness of its concept, the talent of its star, and even that one action scene. Part of the problem is the lack of a distinct villain—Close hams it up in a few scenes but she’s not memorable enough or given enough time—which means Rapace has to flee a series of Men in Black with Guns, which just gets tiresome after a while. It’s one of those Netflix films or shows that might get the job done on a boring Friday night, but that you won’t remember by Monday. We’re starting to see those with shocking regularity. Let’s hope the pattern changes soon. 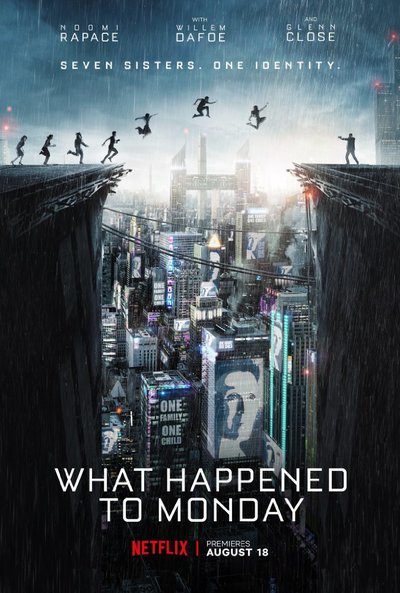