What Do We See When We Look at the Sky?

“What do you see when you turn out the light,” John Lennon and Paul McCartney ask their creation Billy Shears (incarnated by Ringo Starr) in the song “A Little Help With My Friends.” “I can’t tell you but I know it’s mine,” Shears/Starr responds. The title of a new film from Georgia, “What Do We See When We Look At The Sky?” is speaking in the same mode. It’s not a question seeking an objective, scientific answer, but an emotional one.

Set and shot in Kutaisi, one of Georgia’s oldest cities, “What Do We See,” written and directed by Aleksandre Koberidze, opens on a scene of kids getting out of school. Sometimes they’re by themselves, sometimes greeted by an adult; there are a lot of puffy jackets, scooters, and stray dogs about. We then see two pairs of shoes walking toward, away from, and back toward each other, as if attracted by magnetism. These are our heroes, Lisa and Giorgi. The two meet again, accidentally, after dark, and trusting in the beneficence of fate, they make a real date for the next night.

But fate has other plans. A group of road-intersection objects—specifically, a seedling planted on a traffic island, a security camera, and a drainage pipe—inform Lisa that her plans will not unfold as she believes they will. Overnight, she will be transformed physically. So will Giorgi. They will not recognize each other and will not meet. The wind tries to intervene with some crucial info but is blocked.

This sounds like a piece of lore transferred from the past to the present; I was reminded briefly of Michael Almereyda’s short adaptations of Italo Calvino’s “Italian Folk Tales,” specifically “The North Wind’s Gift.” But Koberidze’s movie isn’t quite a fable or a parable, largely because it takes the long way in getting to its conclusion.

This frequently beautiful movie has a measured style. Its shots, some of them striking compositions and other deliberately less so, are held long enough for them to breathe, so to speak. There’s not much in the way of narrative momentum, which may make some who came for the magical realism feel cheated. This is a film that needs the viewer’s surrender.

Not to say that nothing happens. In addition to changing their looks, Fate, in the form of what Lisa is told is a curse, also changes their abilities. Giorgi can no longer play soccer but remains obsessed with the game. Once-diligent med student Lisa can’t retain what she’s learned in her courses and has to ditch her job at the pharmacy. She winds up hawking ice cream, he starts working with a hang-from-a-bar-contest entrepreneur, and at one point, the two are stationed yards apart, catty-corner from each other near a foot bridge.

Despite their initial love at first sight, they don’t recognize each other. Shouldn’t true love transcend appearances, though? If they’re really soulmates, right? Or has the curse changed their souls, as well? Koberidze, who also narrates the movie, admits at the end that he has no answers. Not only to questions about his narrative, but about why he’s making films at all in the face of the brutality in the world and the powerlessness of ordinary people to prevent it. He never comes out and says it, but once the narrative resolves—and it resolves as Koberidze says a certain soccer match related in the movie resolves, in that “everything happened the way it had to happen”—we might conclude that love could be part of the answer.

In the meantime, this movie means to make us notice the marvelous in the everyday, in much the way that a great James Schuyler poem does. By gently underscoring often overlooked details, and privileging things we tend, out of habit, not to notice. There are a lot of stray dogs in this movie, but we see them differently when we’re told that one of them has a favorite soccer team. 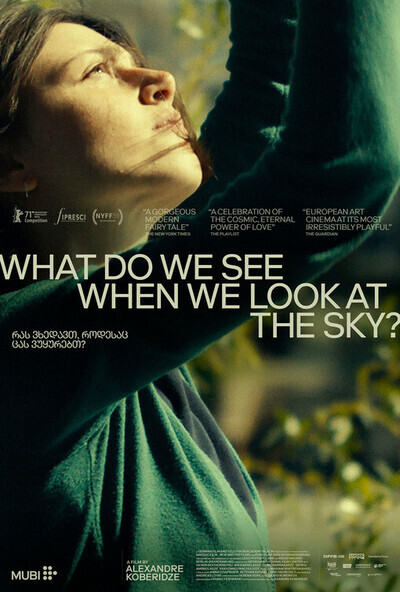