Torrential rain soaks director Anthony Chen’s “Wet Season” with a melancholic yearning for warmth. As water pours outside, the interpersonal storms of two solitary people also rage on. Though it's a facile metaphor, its desired effect mostly pays off.

For his new subdued drama, the Singaporean director reteams with Malaysian actress Yann Yann Yeo and local young star Koh Jia Ler. Chen’s 2013 debut “Ilo Ilo,” featured Yeo as a pregnant mother so overwhelmed with work that a Filipino housekeeper becomes the primary caretaker of her 10-year-old son (Jia Ler). Similar themes around substitute motherhood and the precocious minds of young males resurface in this follow-up but with added maturity.

This time the main victim of affective neglect is absentminded teacher Ling (Yeo). Trying for a child through IVF, she juggles her thankless profession and her crumbling marriage. Her husband, barely present, has outsourced all of his familial obligations to her, from taking care of his ill, non-verbal father, to attending functions with his relatives on his behalf.

News broadcasts also make her aware of the political turmoil in her native Malaysia. With Singapore being a country comprised of people from diverse backgrounds, including plenty of immigrants, the idea of being from another land prevails in Chen’s work. It is, however, more conspicuous in “Ilo Ilo.”

And so, in that fragile state with no support system, gentle attention from her teenage student Wei Lun (Jia Ler) comes as a respite. Tonally, Chen maintains an air of innocence in their not-yet-inappropriate relationship, but even if this film doesn’t connote the malice of Hannah Fidell’s “A Teacher,” it also heads toward confusion and broken trust.

The plot quickly reveals itself to revolve around the emotional ineptitude of the men in her immediate circle, who are all either understandably immature or infirm. Cruel circumstances have made it so that she’s always reluctantly mothering someone—her father-in-law or Wei Lun—but negatively distinct from the way she had envisioned it. Wei Lun’s arc reads as thin: a boy inexperienced in love whose parents travel for work.

Through several expected revelations, Yeo’s restraint keeps “Wet Season” from giving into to full melodrama, at least until a scene in the third act that rips a page from “The Notebook.” There’s a sense of balance in the muted intensity of her exchanges with Jia Ler. In the interest of protecting her job, she gives away very little with her smiles or silent cries, while he transpires the clumsy vivaciousness of youthful manhood.

It’s a fascinating move from Chen to cast Yeo and Jia Ler almost a decade after they were mother and son on screen, now in a quasi-romantic coupling between individuals with deep voids. Yeo runs away with the movie in regards to the grade of difficulty involved in her part, given that her character has much more at stake and crosses many lines in the process of revaluing herself.

Over the course of the story we, as outsiders looking into Singaporean society through his fiction, become aware of the younger generation’s disdain for learning Chinese. Teens prefer to speak English. Therefore, Chen deliberately makes this language her subject. As everyone dismisses Chinese class as unimportant, they are in turn disposing of her. This subtext could have been deployed less overtly, but the cultural specificity is an added narrative bonus that ties well with her tribulations.

Also to the drama’s edification is how cinematographer Sam Care refrains from leaning into the perpetual rainfall in a clichéd manner. That’s not to say that the frames aren’t moist, but the presence of such abundant liquid is more atmospheric, playing on the cloudiness of the days or the blurred vision it produces while driving. Chen turns Ling’s car into her moving island of safety. From a practical standpoint it keeps her dry as the monsoon washes it all away, but it’s also the only place she seems at peace or comfortable enough to cry, where she and Wei Lun spend time alone. Such built-in details flaunt Chen’s writing abilities, even if elsewhere there are shortcomings.

Once the platonic façade drops, “Wet Season” goes head-on into situations that dismantle the subtly and the delicately constructed ambivalence of the performances. If you feel like you know where it’s headed, you are probably correct. But while Chen’s refusal to subvert commonplace elements is disappointing, there’s a sharp note of sorrowful, aching understanding running through the protagonists’ shared ordeal.

Drenched in their individual despair, momentary for both but not for that less painful, Ling and Wei Lun bare it all, gifting each other the lesson of heartbreak and the promise of a brighter day ahead. 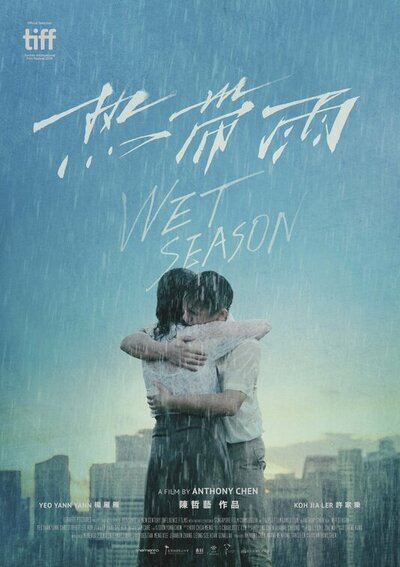