The small town of Beaverfield is in crisis. A sly oil man named Sam Parker (Wayne Duvall) is trying to get a pipeline built in the town, and seems to relish how the proposition has divided its citizens. A werewolf then enters the picture to clean house, naturally, in "Werewolves Within," Josh Ruben's playful horror-comedy about being a good neighbor.

Enter Sam Richardson’s incredibly nice Ranger Finn, who drives into Beaverfield listening to instructional tapes on how to be a man as if trying to learn song lyrics. He’s assigned to oversee the pipeline’s construction, and with the help of a chipper mailperson named Cecily (Milana Vayntrub), is made quickly aware of all the secrets and drama that make up Beaverton's dysfunctional vibe. In setting up this world, the script by Mishna Wolff (adapting a Ubisoft virtual reality game) pokes at modern political tensions, using the pipeline as a de facto divide between progressive and conservative mindsets. Removed from the mess in general and living out in the woods with his guns is Emerson Flint (Glenn Fleshler), an imposing and gruff man who everyone suspects once the word “werewolf” enters into play. When corpses start showing up and a snowstorm traps a select few in town, it's up to Finn to keep everyone from killing each other while a scientific expert Dr. Ellis (Rebecca Henderson) verifies whether it's a werewolf or not.

Ruben previously made his mark with the micro-budget horror “Scare Me,” and shows again that he has an inspired touch for the pitch of "it was a dark and stormy night." The films of Edgar Wright ("Hot Fuzz" in particular) are clearly an influence here, and Ruben uses some of Wright's sharpest tools for instant, economical world-building: playful soundtrack choices (like the soda pop ditties that introduce us to Beaverton, juxtaposed with Anna Drubich's straight-up horror strings); whooshes in the sound design that ramp up one scene to a sudden cut; characters that suddenly pop into the camera's frame for comedic effect. All of these elements slightly elevate the world of “Werewolves Within,” so that when everyone is stuck inside a hotel (owned by Catherine Curtin's Jeanine, whose husband is werewolf food in the beginning), it’s unmistakable what kind of horror this is. That is, a goofy and skillful one, with a lot of charisma across the board to paper over its shortcomings.

Part of the appeal in watching “Werewolves Within” is in seeing all of this talent easily vault over the low bar of making the best video game adaptation yet, but also in basking in such lovely on-screen energy. Richardson and Vayntrub are a special grade of adorable in early passages that nearly place them in a mid-2000s Sundance rom-com, dancing around each other like high schoolers when they first meet; they share a scene in an empty axe throwing bar that's jam-packed with wholesome sexual tension, references to Walden, and '90s songs, all before dopey Finn proves that he’s not over his ex. Throughout, the two give chutzpah to the movie’s quaint progressive ideas, like how Finn's overall arc shows the ineffectiveness of being told to “man up,” or how Cecily has a great deal of agency while only reading like a fantasy to Finn. Both bring a finite sincerity to characters whose sweetness is ebullient, not cloying. It’s the kind of work that fires up the entire movie, and if there's any justice in this hellish business, this film will make Richardson and Vayntrub the go-to leads for even bigger projects.

In filling out the rest of its ensemble, “Werewolves Within” opts to go for cartoonish people who try to pass as real ones (instead of vice versa). That choice doesn’t help the movie much in making its larger, grounded point about being a good neighbor, but it allows such animated actors to have fun with characters that play out like broad parodies. Michaela Watkins and Michael Chernus play a conservative couple, Trisha and Pete; she cries "Antifa" and fawns over her dog Cha-Chi, he is a storied creep with the buried tales of adultery to prove it. Then there’s the two married millionaires who own a yoga studio, Harvey Guillén’s Joaquim and Cheyenne Jackson’s Devon, and they’re vehemently opposed to the pipeline. To my mind, the scene-stealers are the chaotic Gwen (Sarah Burns) and Marcus (George Basil), a couple of horny mechanics who gas each other up, often to everyone’s confusion. You recognize the unabashed tropes of these couples (the conservative couple; the gay couple; the white trash couple) but it’s exciting to see how everyone fills in the familiar.

The characters are given lively embodiments all around, and the set-up is irresistible. (Plus, it's exciting to see a sense of humor mixed with 1974's "The Beast Must Die," a bad-ass, more straightforward ensemble werewolf whodunit that's all about its guessing game.) But as you're going from one goofy scene to the next, something is holding "Werewolves Within" back from completely launching into the stratosphere. It's the werewolf problem, which the script tries to make legitimate with accusations and twists, while minimizing its comedic dialogue to amusing but throwaway lines that characters seem to say under their breath. The tense distrust between its secretive characters builds and builds, climaxing to a kooky slaughter with some savvy in-camera gags, and yet the comedy noticeably does not build. “Werewolves Within” is a fun movie that has a rich air of silliness but it has less souvenirs, less memorable lines, than you'd hope. “What is this, Dumbass Island?” is my favorite line from the movie, maybe because it’s exclaimed so forcefully by Gwen, but I had forgotten about this gem until my third time watching it. An even wilder script could have given us so many more, especially since the cast is so clearly game.

It seems telling that some of the movie’s weakest moments involve the ensemble all together, in the same shot. As they stand around Jeanine's hotel, everyone gets stuffed into a static frame, fighting for our attention as the whodunit question hangs overhead. The foreground and background of certain shots are filled and the dialogue bounces back and forth; you might miss a main joke's full impact because this visual approach doesn't always guide your eye, when it needs to do just that. These thwarted moments go against the otherwise impressive tone that Ruben gets from his juggling act that includes some shocking violence, cutting back and forth between all of these personal beefs, and the ruling goal to keep it fast-paced.

But Ruben is a helluva party host; he proved that with just three characters total in “Scare Me,” and most of their activities involved telling spooky stories around a fireplace. Here, he lets loose with many of the goofy, creepy impulses that make him such a welcome voice in crowd-pleasing horror, creating a giddy spirit with his long roster of future household names. All in a blood-gushing tale that Mr. Rogers would be proud of, and one that winds up to a main character shouting at the top of their lungs, “IT’S OK TO BE NICE.” Consider this an endorsement of “Werewolves Within,” but also the good heart that's clearly behind it.

Now playing in theaters and available to rent everywhere July 2. 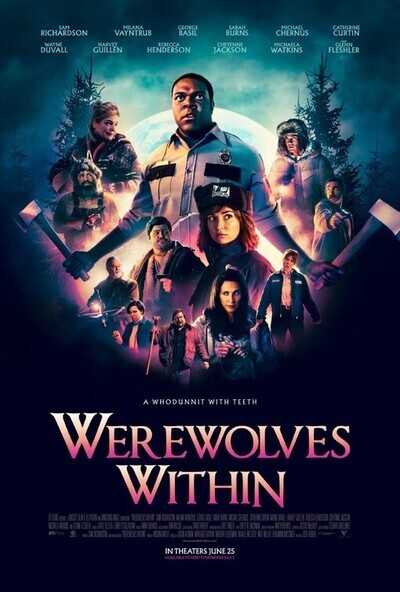 Rated PG-13 for some bloody violence, sexual references and language throughout.