Welcome to the Blumhouse: Bingo Hell

To launch this year's quartet of Amazon Prime Video original films under the "Welcome to the Blumhouse" banner, Adriana Barraza stars in the hollow satire "Bingo Hell" as Lupita, a longtime resident of the small town of Oak Springs who enters the movie nosey, stubborn, and a little aggressive. When a hipster coffee shop moves into her neighborhood, bringing young people and their Free Little Library box, she bumps into one new resident (director Gigi Saul Guerrero in a cameo) spilling coffee over them, sending a message. Her neighborhood is being gentrified, but Lupita is not going to move. She's a feisty antihero worthy of a big adventure, and “Bingo Hell” simply places her inside a labored metaphor about winning big that quickly wears out its wicked awe.

As curmudgeonly as she can be, Lupita is all about her fellow citizens, who she has known for decades, including Dolores (L. Scott Caldwell), salon owner Yolanda (Bertila Damas), and mechanic Clarence (Grover Coulson). Their great bonding place is a bingo hall in town, where they’ve spent countless raucous but civil nights, marking boxes, vying for little prizes, creating some sweet on-screen chemistry that lingers throughout the story. But the bingo hall is soon bought and renovated by a slimy, unmistakably untrustworthy character named Mr. Big (Richard Brake), who offers cash prizes far bigger than the previous days, and has decorated the inside of the bingo hall like a goth circus with a great light show. He’s got cynical, Faustian bargains to collect on, ready to eat up the souls of its winners. “Bingo Hell” is about Lupita quickly realizing the evil behind this new flashy enterprise, and trying to get her fellow friends to see past the mesmerizing promise of instant wealth.

This is an intriguing premise, told by a director who has done well with the idea of American fantasy curdling to its horrific reality, as with her previous and highly recommended “Into the Dark: Culture Shock.” But there aren’t enough edgy pieces in this satire (with Guerrero sharing co-writing credits with Perry Blackshear and Shane McKenzie) to demand your interest. There’s no great surprise, or scares, however much its general premise puts a monstrous face to a mentality that does drive American ideas of self-worth from the largest city to a place like Oak Springs. The message is as anti-subtle as Mr. Big’s flyers that eat up the walls of the small town: “Don’t you deserve the life you’ve always wanted?"

Guerrero tries to keep the movie busy with select stylized set-pieces, to create the illusion that something is going on in the movie’s vacant lot of a second act. Any time it enters into the grotesque fantasy it’s all about dynamic lighting schemes and cartoonish sound effects—characters are placed into circus-like nightmares, and the green slime that emanates from hundred-dollar bills sounds extra squishy, a direct callback to Larry Cohen's similar satire "The Stuff." And even when the storytelling is not about creating horror, it goes for a cartoonish edge, with a quick-cut energy and other cues. It creates the air of being busy, of being goofy, but it gets little momentum. The goofiness also clashes with its less self-aware cheesiness, namely a subplot involving a kid named Caleb (Joshua Caleb Johnson) who flirts with trouble, and whose mother and grandmother become hypnotized by the bingo game.

The film proves to have too flat of a narrative arc, especially when it’s about watching these different citizens of Oak Springs succumb to their nightmares of needing one big win after another. As in sequences when big winners are hypnotized into unwitting self-destruction, it’s a simple one-way ticket to gruesome fate (the death scenes aren’t disturbing, but the effects crew gives their blood-spraying, flesh-ripping, gooey best). "Bingo Hell" struggles to make an interesting point about its central topic; it can only muster to depict the desperation of people, and the willingness for entities like Mr. Big to take advantage of it. It makes Brake’s villain, an angel of death who stands on his bingo hall rooftop as the droves shuffle in, more boring than he should be. Even with the poetic, vicious grin we can see from Brake’s gummy smile, feasting on the dreams of lovable people misguided by materialism, there’s far too little to fear, or think about. 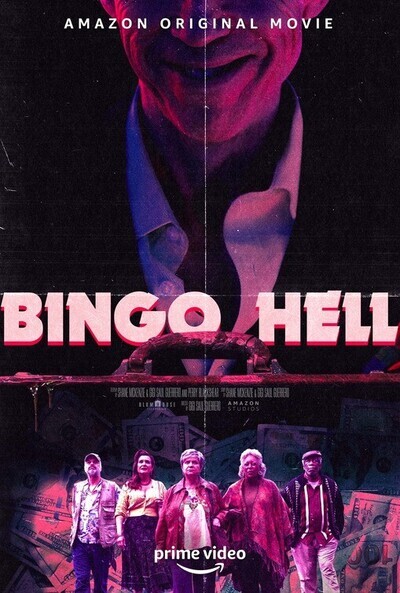