“WeCrashed” might be too good toward the story it portrays, that of Adam Neumann, his wife Rebekah Paltrow Neumann, and their billion-dollar company that sold work space as a service. We don’t need their story told. And yet “WeCrashed” nails what can make these stories enticing, proving that great craft across the board goes a long way. From its sharp directing to fascinating performances to clever writing, “WeCrashed” immerses us in this saga and then has the derring-do to sell it to us as a love story. Thanks to villainous, career-best work from both Anne Hathaway and Jared Leto, we buy it.

Adam and Rebekah Neumann wanted WeWork to “elevate the world’s consciousness,” whatever that means. But this series from Lee Eisenberg and Drew Crevello helps us see how that way of thinking became shared by CEO and co-founder Adam and his chief branding officer Rebekah, how their affection might have been the only real thing as the workspace-sharing company kept raising its value while losing money at the same time. We see the way that they gassed each other up during their "underdog" days, all the way until the infamous S-1 statement that made them a public joke and created its own fiasco in which Adam was asked to step down. Here are two people who became so rich together out of selling space to the millennial worker market that they didn’t have to make sense. And Adam knew that when you can get people to believe in your business, they’ll do anything. They’ll either bust their ass for you so that you can keep partying, or they’ll bet on you with millions and billions.

By focusing on Adam and Rebekah's relationship, "WeCrashed" feel looser than just recounting different power moves and board meetings, as hampered Showtime’s take on the Uber tale, “Super Pumped.” This series is incredibly well paced, and instead of waning with each episode it becomes more addictive, more fun to watch the series commit to tricking us into feeling something for these monsters. Leto and Hathaway are perfect for the roles in part because of their own star power, as two mighty theatrical actors who both have been accused of being too much, sometimes justly so, and bring that too-muchness to people who were too much.

As Adam, Leto continues the comedic stride he had in Ridley Scott's “House of Gucci,” completing a transformation into an actually dynamic actor instead of just a needy one. It’s like Leto realized that the ideology of playing an actual Joker in David Ayer’s “Suicide Squad” is more effective when less literal. Like in “House of Gucci,” he plays a soulful variation of a clown. This time he captures the forcefulness, and makes a superpower out of how Adam can read people and their needs. At the same point, Leto also helps detail why Neumann might have been a decent businessman, but he was far better at making himself what the fantasy that this bubbling economic culture of investing and ambition wanted.

Hathaway is wickedly good in her part as Rebekah, depicting (with the help of in-depth storytelling) her desires to also become a business guru after playing such a behind-the-scenes influence on Adam’s own moves. A lot of it comes back to Rebekah’s struggle to be an actor, or a good one. Instead, with her new financial power she becomes the type of boss who gets WeWork employees fired for minor infractions, for disturbing her sense of space, while she perfects toxic niceness. Hathaway can somehow smile with a straight, closed mouth, one of many passive, restrained weapons in this performance that Hathaway always plays empathetically. The series’ excellent third episode puts a lot of focus on Rebekah and her emotional past during the company’s summer camp party weekend, and Hathaway more or less gives us the backstory of a wannabe cult leader.

There’s a stronger story about WeWork culture in general found in the 2021 documentary “WeWork: The Making and Breaking of a $47 Billion Unicorn,” which highlights more of the cult appeal that the Neumanns had to their workers. This series captures some of that poignantly—like a sharp montage set to MGMT's "Time to Pretend" that shows how Chloe (Cricket Brown) goes from weekly “Thank God It’s Monday” parties to full initiation at the company’s summer camp party session. But you wish for more observations like that, and also for more about a person who initially is in a business love triangle, Kyle Marvin’s Miguel McKelvey, who helped found the company and seemed more dedicated to the work. The series leaves him and Marvin’s as-good performance mostly to the side.

With a series like this, it can always be a question of what actually happened and what didn’t. And yet there’s a seamlessness between moments that seem too poetic to be true, but contribute to the story’s tone and savviness. It’s often felt in the moments it conjures for the Neumanns at the WeWork office, like when it uses the ratty intro synths of “Harlem Shake” as a motif. In the glory days, it gives Adam a moment to step away from a meeting he doesn't care about, some kind of accountability nonsense, and put on a wolf mask to take part in a trendy video. But when the situation is especially dire later in the show, the sounds of "Harlem Shake" are a death toll. The party is over.

Thanks to directors like Cory Finley, Glenn Ficarra & John Requa, Tinge Krishnan and Shari Springer Berman & Robert Pulcini, the series accomplishes a wild tone that’s just funny enough, while balancing each business move with deep chemistry between Adam and Rebekah. It becomes the core of it, it’s what explains everything that happens in this show, and it makes us find some type of bizarre, unexpected connection with people who nonetheless straight-up do not deserve the love this series has for them.

But that’s the seduction of a story like this, because watching movie stars like Hathaway and Leto in such rich, villainous roles, reflecting modern culture back at us can still be so much fun. With a series like “WeCrashed,” you nearly forget midseason that the intent is more or less schadenfreude. This might explain why the last episode is possibly its weakest—it doesn’t know how to wrap up this entire saga while bringing in the ugly reality for the disgusted viewer that the Neumanns made a fortune out of getting fired. It can throw salt water in their beautiful faces, but that’s it. At least we get a great show out of it.

All eight episodes screened for review. The first three episodes of "WeCrashed" premiere on March 18th on Apple TV+. 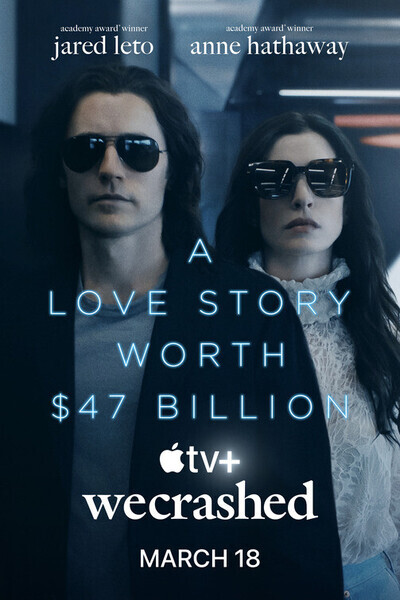