We Come as Friends

Feel-bad docu-essay "We Come As Friends" is a deliberately vague portrait of Sudan as a country beset by self-interested neocolonialist outsiders. Fitfully narrated by director Hubert Sauper ("Darwin's Nightmare"), "We Come As Friends" adopts an apolitical, and largely anecdotal approach to its presentation of Sudan and its inhabitants. Interview subjects are almost never introduced by name since Sauper's footage is meant to be accepted on an implicit, symbolic level. This approach is infuriating since it constantly asks viewers to understand scenes in a general way. Viewers are not privileged with a more thoughtful, specific view of the institutionalized problems that Sudanese natives face because Sauper's not interested in making that kind of film. Instead, he provokes viewers by juxtaposing quasi-archetypal stories and loaded footage that are, as they're arranged in the film, only as meaningful as you want them to be.

"We Come As Friends" begins and ends with an unidentified speaker rhetorically asking "Did you know that the moon belongs to the white man?" That pseudo-naive question makes a little more sense at the beginning of Sauper's film since it is the punchline to a story about the voracious nature of white countries who, during the Space Race, were vain enough to try to claim outer space for their respective countries. Sauper repeatedly sympathizes with this kind of mythical revisionist history by over-extending, though never cogently developing, its logic.

We are told that in Sudan, rich foreigners assimilate everything. People sing songs about and in the voice of French, British, American, and Chinese celebrities, politicians and philanthropists. Religion is perceived in binary form: there are only Christians and Muslims, and nary a Jew, Sikh, Buddhist, atheist, or anything else in between. Children are punished if they do not wear Western uniforms. They are taught to sing about the value of "cooperating and development." And outsiders are called "aliens," as in the scene where Sauper asks a trio of indifferent Chinese engineers "which planet did you come from." One engineer shoots back a blank stare that speaks volumes, but doesn't necessarily confirm Sauper's simplistic adopted perspective.

At this point, I must point out that I am sympathetic to the pessimistic but pragmatic ideas that are forcefully presented throughout "We Come As Friends." I also think that Sauper's presentation demands a critical response. Viewers—even ones who are part of the choir Sauper is preaching to—should not trust "We Come As Friends" because it constantly expects its audience to understand conflicts and interview segments without any contextualizing information. What does it matter if one engineer tells viewers to "be careful of cultural differences" while a clip from "Star Wars: A New Hope" plays on a laptop right next to Sauper's subject? This clip means nothing beyond its implicit, over-burdened message.

Advertisement
Like Herzog, Sauper understands images as images, and therefore values oneiric details over specific information. Sauper's footage is consequently only as faithful to reality as he wants it to be. He never focuses on any one interview subject or type of story long enough to confirm that what he's showing us is truly representative of a systemically abusive system of philanthropic aid. So when a group of Sudanese natives allude to "years of colonialism and oppression from the Arabs," it's unclear what Arabs they're referring to.

Instead of clarifying the proliferation of muddled, monochromatic perspectives he finds in Sudan, Sauper prefers to just collect them in one film. For example, in the beginning of "We Come As Friends," Sauper tells us a story about Queen Victoria, and how she divided Africa into countries without ever visiting the continent. Sauper also includes footage of a playful argument he had with a Sudanese man (again, not identified) who calls "The Internationale" a "baby game" despite Sauper's bemusedly exasperated protests ("It's a socialist hymn!"). I didn't believe a minute of "We Come As Friends." It's a jumble of story fragments that are left unexamined because they look meaningful when thrown together in a single film-length presentation. You can buy what Sauper's selling, but I don't recommend buying it from him. 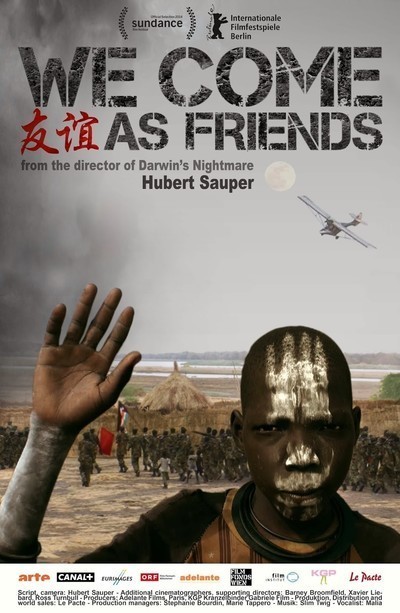