Among his many directorial super powers, Robert Rodriguez has the ability to glide with ease between worlds that are family-friendly ("Spy Kids") and those that are extreme, campy, and violent ("Machete"). Each jump between genres exhibits varying degrees of success, but such high ambition works as a through-line in his unique career. With “We Can Be Heroes,” the Mexican-American filmmaker returns to children’s entertainment and his 2005 feature "The Adventures of Shark Boy and Lava Girl in 3-D," expanding the concept behind those title characters to a whole universe of spandex-clad superhumans battling an extraterrestrial threat—or so it seems.

On the scale of how solemnly movies take the extraordinary protectors of the Earth, “We Can Be Heroes” places somewhere between Disney’s “Sky High” and "Marvel's The Avengers,” but boasts the distinct candy-colored futurism of Rodriguez’s PG-rated oeuvre. Rodriguez pokes fun at the trite tropes and delivers on the action (often also lacing the fights with humor), but always with an earnest message on how adults, set in their stubborn ways, don’t always know best.

Deceivingly, Rodriguez opens with Miracle Guy (Boyd Holbrook), your standard Superman-inspired character, and other grown up heroes confronting an armada of tentacled aliens with bad intentions. The crisis forces Marcus Moreno (Pedro Pascal)—think Hawkeye of The Avengers—to break the promise he made to his daughter Missy (YaYa Gosselin) of never fighting in the field again. Outnumbered, the diverse group of demigods is captured. Infighting didn’t help their cause. But this is not their story.

Fearing that the slippery invaders may go after them, the government hides the superheroes’ kids in a bunker. Astute but without any powers, Missy feels out of place among the gifted bunch, all with knowingly on-the-nose-names related to what they can do: Wheels (Andy Walken), a tech-savvy boy in a wheelchair; A Capella (Lotus Blossom), a girl whose singing voice can levitate objects; Ojo (Hala Finley), whose name is Spanish for eye and can predict the future through her drawings. Sharkboy and Lavagirl’s daughter Guppy (Vivien Lyra Blair) is a scene-stealer from beginning to end.

Together the brave young minds set out to rescue their parents, saving the world as a byproduct of their efforts. But Rodriguez doesn’t make the plot’s significance about whether or not they will accomplish their mission (we all should know the answer to that); rather it's what that victory represents. Unlike the later installments in the “Spy Kids” franchise, which lost the fresh magic of the original, “We Can Be Heroes” packs a compelling theme centered on the transfer of power, namely how the next generation is already better prepared to fight the evils that afflict human life than us.

Through the kid’s assessment of their moms' and dads' jobs, Rodriguez poses comedic questions we’ve all asked about the comic book characters who have dominated the big screen over the last two decades, like with how fights in urban centers would cost taxpayers billions, or with regards to the ridiculous designs of their outfits that include unnecessary buckles and underwear on the outside. These aren’t revelatory observations, but in the story’s context, of children being unimpressed, they work for laughs.

Serving as his own cinematographer, Rodriguez curiously favors a color palette with purple tones for the alien spaceship, resembling those seen in Lady Gaga and Ariana Grande’s “Rain on Me” music video, which Rodriguez directed earlier this year. That short effort also features a futuristic aesthetic along the lines of his previous film “Alita: Battle Angel,” meaning that certain motifs and stylish trends continue to appear across multiple projects in his prolific vision.

Similar to the recent live-action reimagining of “Dora the Explorer,” this adventure also manages to balance the importance of having something sophisticated to say with its feel-good elements. Both releases also include a small role for Oscar-nominated Mexican actress Adriana Barraza (“Babel,” “Amores Perros”). She is the Professor X of this universe who trains the pre-teens and guides Missy, her granddaughter, to understand that her leadership skills are as exemplary as any power. An acting alchemist, Barraza makes gold out of even the shortest part, and here she hilariously scolds Pascal and his friend in one of the movie’s best scenes.

While young YaYa Gosselin has amassed several credits over the last couple years, her lead role here is her first and hopefully the breakthrough for a long career. Her casting, along with that of Barraza and Pascal, speaks once again to Rodriguez’s commitment to writing Latino characters into stories meant for mass consumption. He neither hides nor makes a big deal about them being Latinos. They simply are. That deliberate approach remains one of his greatest contributions to an industry still reluctant to do the same.

With enough enjoyable originality to differentiate it from the numerous takes on the super men and wonder women that so heavily populate film and TV these days, “We Can Be Heroes” flies Rodriguez back to one of his main areas of interest.

Available on Netflix on December 25. 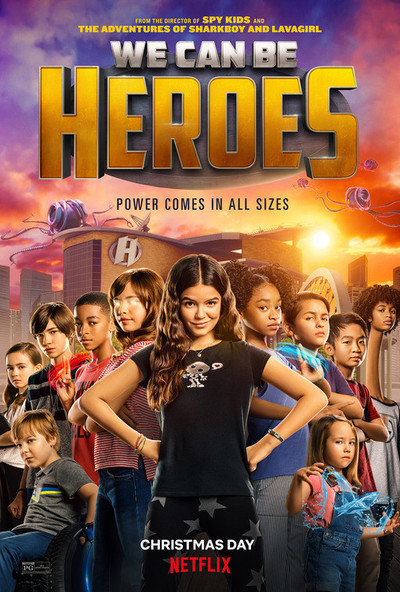