We Are the Best!

Resembling a Swedish after-school special tailored for American art houses, Lukas Moodysson’s "We Are the Best" tells of two girls who, in the Stockholm of 1982, decide to become punk rockers and enlist a third girl to form a band, which is never within a million miles of being good, even by the ragged standards of punk, but still considers itself to be "the best." The film’s winsome, self-satisfied comedy will no doubt appeal more to viewers who prize juvenile hi-jinks over the cultural moment it depicts.

As anyone familiar with punk during its late-'70s/early-'80s heyday will recall, its musicians were overwhelmingly males in their late teens and early 20s. Still, taking that reality and spinning in a female direction is a perfectly valid idea. The curious thing here, though, is that the two main girls, doughy Bobo (Mira Barkhammar) and impish Klara (Mira Grosin), look like boys, and not just because of their unflattering haircuts and lack of makeup. Though they are supposed to be 13, they could easily pass for nine or ten, which means that they resemble pre-pubescent males rather than punk’s raging adolescents.

Is this meant to signal that the rebellious girls don’t give a fig about gender norms? Or does it inadvertently signal that only girls who don’t look like girls can have a go at punk? However you parse this, the film’s most crucial emphasis undeniably involves age rather than gender: In making its main characters so young—and appearing even younger—it effectively infantilizes punk, making it a matter of child’s play (literally) rather than teenage anxieties and energies.

Again, only those who still value punk as a particular cultural phenomenon rather than the premise for a kiddie sitcom are likely to be bothered by this, and Moodysson astutely begins his film with claims that "punk is dead." Indeed, by 1982, punk’s original ferocity was clearly fading, which is why there’s some credibility to the notion that, rather than expiring outright, in Sweden it was simply trickling down to the middle-school level.

For Bobo and Klara, school is a drag, as are their convention-bound schoolmates, so they verge off into a clique of two, disdaining the clueless around them and picking up instruments in the school practice space of a teen heavy metal group called Iron Fist. Imitating their punk heroes, the duo makes aggressive noise and shout angry lyrics. (The only song they come up with is translated "Hate the Sport!" in the subtitles. "I Hate Sports" is the gist.) But here "punk" really isn’t about music; it’s about cheeky attitude.

Eventually realizing that they need to expand if they’re to really be a band, they set their sights on Hedvig (Liv LeMoyne), a demure and comely student who’s skilled at playing acoustic guitar and singing. Though Hedvig’s a Christian, something Bobo and Klara find very non-punk, they recruit her via friendship, which she evidently needs. Unlike them, she looks like an actual teenager, but after they hide her figure in baggy punk clothes and shear off her beautiful long blonde hair, she too looks like a boy—a very pretty one.

While most of the film has a loose knit, anecdotal air, dramatic complications arise when the three go off to a nearby town to meet the members of a punk trio they admire. It’s clear they’re hoping for dates rather than musical advice, but they arrive to make the awkward discovery that the band has shed one of its members, so it’s three girls and two boys. After Klara makes a connection with one of the guys, Bobo jealously goes behind her back and tries to sabotage the budding romance.

In real life, or a more dyspeptic and authentic punk rock movie, that interference might lead to the band’s dissolution, if not Sid and Nancy-style mayhem. But "We Are the Best" is not that kind of movie. It’s the happy-face, kids-are-alright punk rock movie, in which the two friends make up after their spat and end up on stage shouting the title’s inane self-affirmation at a roomful of pissed-off provincials.

Moodyson gets spirited, engaging performances from his three young leads, and his directing style, which includes lots of handheld camera and zooming into close-ups of the leads, lends an air of both intimacy and improvisation. It’s very capable and audience-pleasing work, which of course means that nothing about it is very punk-rock. 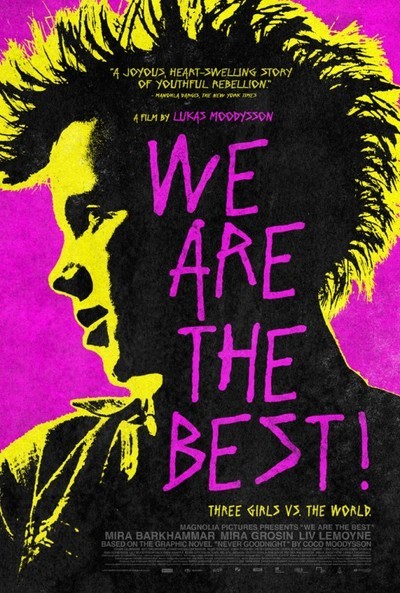