With her head resting on a cushion—eyes open and neck exposed—a Chinese woman named Chuyao (Xingchen Lyu) waits for a tattoo artist to implant a tracking device inside her flesh based on her abuser’s request. The image, seen early in director Antonio Tibaldi’s moody and multi-language tale of aliens and human trafficking, “We Are Living Things,” resembles a vision of a robot in need of repairs—immobile and at the mercy of her cruel master.

And that’s precisely how her trafficker (Zao Wang) sees Chuyao, as a disposable object only useful as long as he can profit from her body. During the day she works at a nail salon, but at night she must satisfy the perverse desires of his wealthy clients. Drugged and unconscious, she becomes a purchasable commodity for their depraved amusement.

Just as she begins to wonder about the fate of other Chinese immigrants who trusted the same people, Chuyao meets Salomon (Jorge Antonio Guerrero), an undocumented Mexican immigrant obsessed with extraterrestrial abductions. Chuyao also believes in life beyond the confines of our planet, and in the kidnappings of humans by entities in the sky. For people like them, abduction seems like the only pathway to freedom.

The more we comprehend the dehumanizing treatment both characters have experienced because of where they come from and how they got into this country, the more the title of Tibaldi’s movie becomes political relevant. No person should need to remind others of their humanity, but in a reality where some lives are tacitly more valuable than others, the phrase doesn’t only feel pertinent. It is necessary to remind us all of the unseen and unheard.

As Chuyao and Salomon plot to leave NYC for Arizona, cinematographer Luca Bigazzi evokes an eeriness from the big metropolis. Director Paolo Sorrentino’s longtime collaborator harnesses the inherent urban lights of the city to give the key environments an almost dystopian aura.

Following them in the middle of the night, in dark alleyways and a makeshift recycling facility, gives one the sense of watching a shadowy world hidden underneath the mainstream stories about a glossy New York. Characters like Chuyao and Salomon are rarely centered in such narratives, surviving outside the boundaries of legality.

Tibaldi and co-writer Àlex Lora insert enough sci-fi elements into this sociopolitical premise to make one wonder whether the pair’s claims of alien contact have any validity, but never too overt as to deviate from the rather grounded tone of the film. Salomon’s collection of magnetic rocks he’s found using a metal detector, and a small moment where Chuyao witnesses a bright light moving in the sky, push the film away from harsh realism.

But the more heightened aspects of this genre piece don’t feel of place thanks to both lead performers operating with remarkable subtlety. Their faces appear almost expressionless, particularly that of Lyu, only allowing for lighter emotions to sneak through occasionally once comfortable with each other. In a sense, it's the inconspicuous nature of their roles, as constantly persecuted people who avoid drawing attention to themselves.

However, while considerable context is provided regarding Chuyao’s migration via phone calls and conversations to expand our understanding of her situation, Salomon lacks character development beyond what we learn about his mother’s disappearance. Over the course of their escape, we come to discover him as a man willing to kill and with an above-average skillset in geology and technology. But he remains mostly unknown to us in his motivations and the past that brought him to this crossroads in his intergalactic search. Still, to see Guerrero, an actor who broke through as Fermín in Alfonso Cuarón’s “Roma,” continue to appear in international productions in substantial parts, will always be a bonus. (Last year he starred in Canada’s Oscar entry “Drunken Birds.”)

The latter part of their journey is less enthralling, as they try to prove their suspicions about the messages they received from other intelligent forms. And some of the script's themes become blatant, like during a campfire confrontation. Their investigation also doesn’t reach any major conclusions about the paranormal subject matter, nor does it bring the story to a major climax (Tibaldi cuts before a confrontation ensues). Still, the filmmakers' parallels between the perils of being a person living outside the system and unexplained UFO-related disappearances offer a truly original angle on tropes associated with immigrant stories.

When undocumented individuals like Chuyao and Salomon disappear, to the desert or to violence, it’s almost as if they had in fact been swallowed into the sky without any trace. But thinking that they continue to exist somewhere out there is a much more comfortable notion than thinking of the horrors that happen daily to those in search of a better future. When this world doesn’t care for you, migrating to outer space sure is enticing. 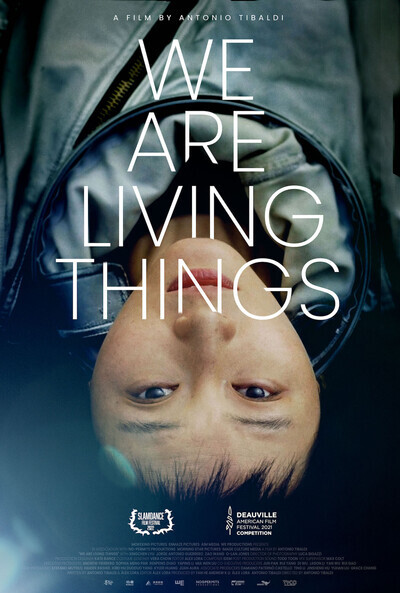